Hospitals may be the focus of news coverage of the current COVID-19 pandemic, but thanks to concerns about the food supply chain and hoarders, supermarkets have been almost as prominent.

Brian Bowers, president of Solid Solutions Products in Anaheim, California, says there’s likely also to be an unseen danger at your favorite grocery: bacteria, mold and fungus lurking in the cracks of the concrete joints of its polished concrete floor.

Bowers says the most-common problems with typical joint fillers are joint separation and cohesive failure.
“What happens is a problem with the materials being used,” he says. “Everyone’s material is similar. They’re all aromatic. And, if you look at aromatic joint fillers, they have limited elongation, low adhesion and tensile strength.”

Part of that, he explains, is whether they’re polyurea, polyurethane or hybrids, they’re all extremely fast setting. How fast? So fast that they can’t be mixed in a cup and poured. 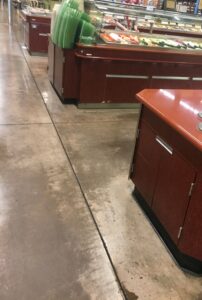 “A lot of times you have less than one minute to put them in the joint,” Bowers says. “That’s not enough time to bond to the sides of the joint, and I attribute that to minimal wet-out times. By nature, you have a product that’s going to be a problem.”

Solid Solutions Products decided to address the issue from a different direction. The company’s E-Z Pour joint filler is an aliphatic, which means it is not only slower setting, but over time it won’t lose its flexibility or color. The elongation is 600 percent, which is approximately three times that of the typical aromatic joint filler.

“My tensile- and tear-strength are higher than the aromatics, they offer a longer wet-out and greater adhesion,” says Bowers. “I submitted my product to an independent testing company and it totally passed the “Standard Specification for Elastomeric Joint Sealant” C920-18, Type M, Class 12.5, Grade P / Use T, M (Class 2). It didn’t chalk, crack, or lose its color. And, it was able to perform in environments down to 0 degrees and up to 150 degrees F.” 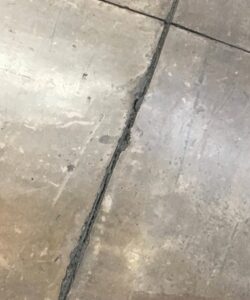 In a second series of tests, Bowers contacted another independent lab that offers tests to check for mold, fungus and bacteria. He then sent test swabs from the cracks in joint filler from the floors of four chain supermarkets in Southern California.

“Right now, they have a guy out front to make sure the basket you’re using is sterilized, but if you drop something on the concrete, it’s another story,” he says. “They have these walk-behind floor scrubbers and they do an adequate job on the surface, but there’s no way they can clean those cracks out properly.”

The best prescription Bowers can offer is to not have the cracks in the first place, and only by using an aliphatic product, he believes, can they be prevented — whether it’s in a supermarket, hospital or locker room. 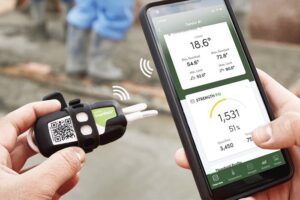