Restoring and laying an overlay onto the concrete floor at this 80,000-square-foot outdoor mall project presented just about every challenge a concrete contractor could imagine.

For one thing, it was old. In more than 20 years, it had been walked on millions of times. It bore the marks of constant, relentless traffic and human abuse — litter, grease, chewing gum and who knows what else. Frequent heavy rains took their toll on the concrete, spreading contaminants and providing perfect growing conditions for unsightly, slippery black moss.

The concrete had been added onto, patched and repaired. Over the years the mall had grown, and new concrete was poured next to old, not always with a perfect match. Patches showed where utility trenches had been dug. Cracks opened as slabs settled. To add insult to injury, a red finish applied to brighten up some areas had worn to an unappealing dull look. Barry Toy, president of Barto Construction Company Inc., of Kapaa, Kauai, summed it up when he said, “It had all kinds of challenges.”

In fact, the concrete restoration was so daunting that when the mall was renovated four years earlier, the concrete work recommended by the architect was shelved. But it couldn’t be postponed forever, so after some research, Barto Construction was called in. The owners’ representative suggested that Toy look to Miracote, a supplier of decorative and repair overlay products, for a solution. Toy attended a Miracote seminar, where he met consultant and trainer Julio Hallack, CEO of Concrete Innovations by Hallack. From there, things began to fall into place.

With help from Miracote regional sales manager Jim Rowe, Hallack and Toy chose Miracote MPC (Multi-Purpose Protective Coating) to apply as an overlay over the concrete that had been patched or colored red, a total of 5,000 square feet spread throughout the mall. They selected Mirastain II Decorative Aqueous Stain to color both the new overlay and the existing concrete and tie them together. One reason for choosing a water-based surface treatment was to keep the project on track. This stain does not require neutralization, so large areas could be stained at once and sealed quickly. Finally, they chose Miracote HD II Sealer to lock in the stain color and provide a long-wearing surface. “With this water-based stain, you can seal within an hour,” Rowe says. “You don’t have to neutralize it, so as soon as it hits the surface and dries you can seal it.”

Then the pair devised a work plan that utilized their crews to their best advantage to finish the job in a short time under challenging conditions. The mall would remain open seven days a week during renovation, so all the concrete work had to be done after hours. Fortunately, Kauai’s weather cooperated for the scheduled stain-and-sealer application. Subsequent sealer coats were delayed by rain showers, which can be frequent and unpredictable on the Garden Isle.

First, Barto’s team cleaned the concrete, pressure-washing it at 3,500 psi. Then they applied the MPC overlay in 30 different areas of just a few hundred square feet each. Now the entire mall was a neutral gray concrete color.

Next Hallack went into action. He brought three experienced staining specialists from his headquarters in Turlock, Calif. They used equipment to match the scale of the job. “I adapt heavy-duty farm equipment sprayers for a large project like this one,” Hallack says. “No way can you tackle a big commercial job with a little 2- or 3-gallon pump. Our electrical sprayer holds 25 gallons. We applied all the stain (80,000 square feet) in three nights.” The architect’s drawings from the earlier mall renovation were used to guide free-form decorative saw cuts, and two colors of the stain, Fire Brick and Provincial Tan, were used to visually tie the floor to the earth tones of the buildings.

Hallack is a believer in using best practices, whether they come from the concrete industry or not. In this case he used some painting techniques to keep the job moving quickly. Because of the large areas and the constant threat of rain, there was no time to mask walls, columns and planters. Instead he protected them with painter’s cardboard, which was lightweight and could be put up and taken down easily. “Experience and common sense helped us move fast — you have to improvise,” he explains. “You have to borrow from other trades, in this case painters.”

In fact, it was Barto’s paint contractor, Arcadia Painting, that came through practically on Hallack’s heels, rolling the sealer on with extra-wide paint rollers. Hallack was impressed. “These were professional painters — you cannot believe how fast they were moving.” Crews were moving so quickly behind the crew ahead that Hallack required they all wear spiked shoes to keep from walking off the stain.

Three coats of heavy-duty sealer were applied to lock down the stain. A water-based stain does not react with concrete like an acid stain does, so it can wear away. The sealer makes it easier to keep the concrete clean (for example, it makes gum removal much simpler), and it protects the color from weather and traffic. When the sealer is worn, it will be much easier to simply reapply it than to have to repair and renovate the concrete again.

The sealer has the added advantage of improving traction, a real bonus in this wet climate. “The moisture and mold make the concrete slippery, so we used a slip-resistant coating, with synthetic aggregate incorporated in the sealer coat,” Toy explains. “It is a clear, fine product that you can’t see. It doesn’t change the aesthetic of the floor.” The synthetic stays in suspension better than simple sand, which falls to the bottom of the bucket. This means the aggregate is evenly distributed without frequent stirring.

Hallack credits the Barto management for the success of the project. “The beauty of this project was teamwork,” he says. “It was coming together as an industry to use knowledge and talents of other contractors. Barto was aggressive and wanted to make a difference, so they were willing to go outside their own expertise to look for help and pay the right money to get the job done the right way.”

Hallack also believes this project will open doors for other decorative concrete contractors. “I think it is a wonderful project. It’s going to make a difference for many retail spaces in the United States. Many remodels don’t include concrete. Now this project proves it can be done. The fact is, we’ve changed the look of 20-year-old concrete, saved two or three weeks, and there was no demolition.” 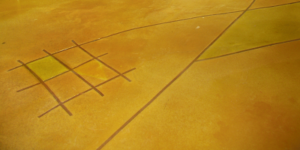 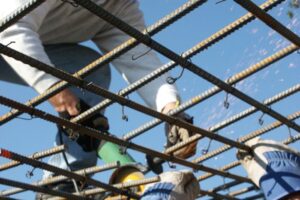