Southwestern Paint and Supply’s Hydro Guard is a sealer designed 22 years ago for secondary containment of chemicals and for sealing exterior stucco. In recent years, decorative concrete fabricators have discovered its thinness and praise its stain resistance and durability.

The polyacrylic topical sealant slightly penetrates the surface and emits a low odor. It also has no VOCs and resists ultraviolet rays. It starts out as a milky white liquid and cures to a nonyellowing, glass-clear coating. You can apply this coating to provide as much or as little sheen as desired. When properly applied and maintained, the sealant has a life expectancy of five to seven years. 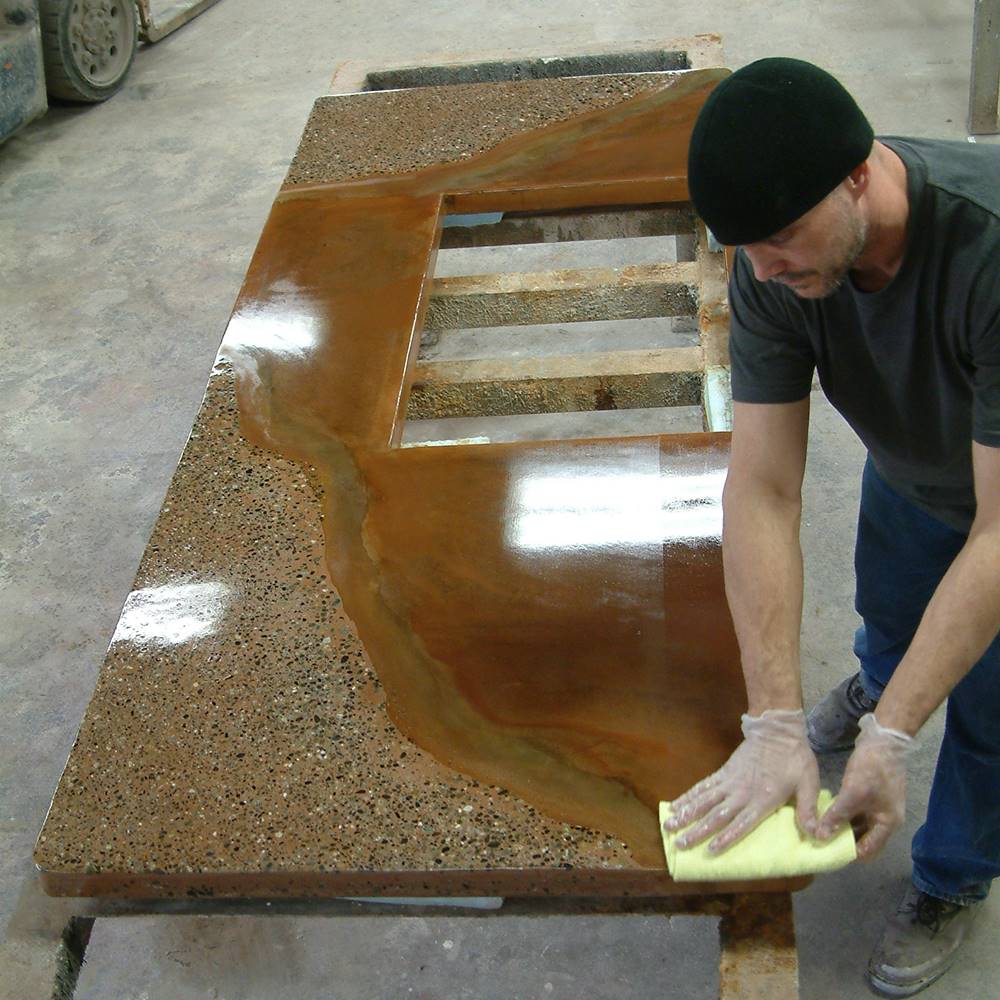 Great for everything interior

Mark Venezia, production manager for Absolute ConcreteWorks in Poulsbo, Wash., says he’s been using Hydro Guard for the last year and a half on everything interior. Projects range from tub surrounds and shower stalls to countertops and sinks. And so far so good, he reports. During that time, “I haven’t had any callbacks.”

Before switching to Hydro Guard, he says, he had run into problems with other sealers. One he had used was very similar to Hydro Guard, but it cost much more and was diluted in strength. “I decided to try the real stuff,” he says. Side-by-side tests he conducted showed Hydro Guard to be 85 percent more stain-resistant to a whole host of things. These included mustard, wine, salsa, egg yolk and lemon, he says.

Besides its superior stain-resistant qualities, Venezia says, Hydro Guard is simple to apply. “It’s so easy a child can do it.” Southwestern Paint literature notes you can use a roller, LP sprayer or brush. However, Venezia prefers to hand-apply the liquid film-building sealer with a microfiber towel.

He soaks the towel and wrings out the excess product, leaving the towel very damp. Gently stroking the surface, he overlaps each wipe by half until he completely covers the surface. Then he lets each coat dry for an hour to an hour and a half before applying another coat. He usually applies a total of four to six coats and lets them sit overnight.

The next day, Venezia sprinkles the entire surface with baking soda. “You could use VCAS (a white pozzolan often used in countertops), but baking soda’s a lot cheaper,” he says. He puts on latex gloves and rubs down the surface to put microscratches in the sealer’s topcoat. “This lets you get a natural concrete look and achieve a matte finish,” he says.

If the job calls for a high-gloss or semi-gloss look, Venezia applies from two to four coats of carnauba wax. He buffs in between coats.

Tommy Cook, a freelance artist and consultant for the precast industry who is currently conducting business as the Traveling Concrete Gnome, says he’d been using a weaker form of Hydro Guard for the last four years. Recently, he switched over.

It’s expensive compared to other acrylics, he concedes, but “it’s definitely worth the money.” While other acrylics typically run in the range of $30 to $50 per gallon, they don’t offer anywhere near the stain and scratch resistance Hydro Guard does, he says.

At the other end of the spectrum, “hard shells,” his collective term for thickly applied sealers that include epoxies and modified urethanes, run upwards of $300 or $400 a gallon. Hydro Guard, with its $195-per-gallon price tag, falls somewhere in between. And its coverage rate runs about 300 square feet per gallon.

Besides using it on countertops, Cook says, “I also use it on my (cast-concrete garden) leaves. It’s a phenomenal exterior sealer as well.”

Cook cautions users not to apply coats too thick., He also advises allowing coats to cure properly or they’ll get a softer surface that easily scratches. “Apply the product as thin as you can in multiple coats,” he says. “I typically apply two to three coats with an hour between them. Then I slurry to fill pinholes.” He then soft-sands to remove residue and applies another four to six coats.

Cook notes that Hydro Guard isn’t as durable and scratch-resistant as hard-shell finishes. However, should the sealer fail or if the surface gets scratched or stained you can repair it more easily.. “A lot of work and money are involved when you have to repair a hard-shell system. You can’t just touch up an area that’s scratched or delaminated. You have to strip it all off and sand it down because you won’t get it to lay right.”

Hydro Guard is unlike thick hard-shell systems. Because you apply it so thinly you can easily spot-repair problem areas without having to redo the whole surface.

When he finishes a job, Cook says he gives homeowners a kit. This kit consists of a pint of Hydro Guard, a 3M Scotch-Brite pad and a microfiber applicator pad. He walks them through the process of maintaining the surface and troubleshooting possible problems.

Unlike topical sealers such as epoxies that make surfaces feel and look plastic, Hydro Guard allows concrete to retain its natural characteristics with some maintenance effort from the end user. “If your customers choose to go with concrete, they need to know they’re going to have to deal with maintenance,” Cook says.

According to Brandon Showers, national outside sales manager for Southwestern Paint and supply in Tucson, Ariz., Southwestern is preparing a new set of application, maintenance and repair guidelines for Hydro Guard from information submitted by their clients. The new guidelines should be ready by early fall 2011. 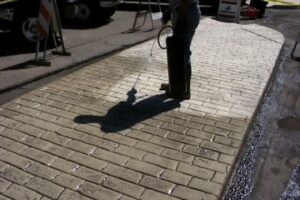 How to Correctly Apply Concrete Sealer 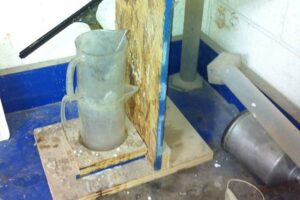 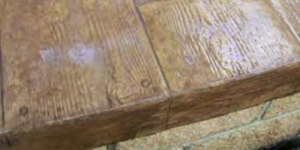 The Bottom Line on Solvent Sealers for Concrete