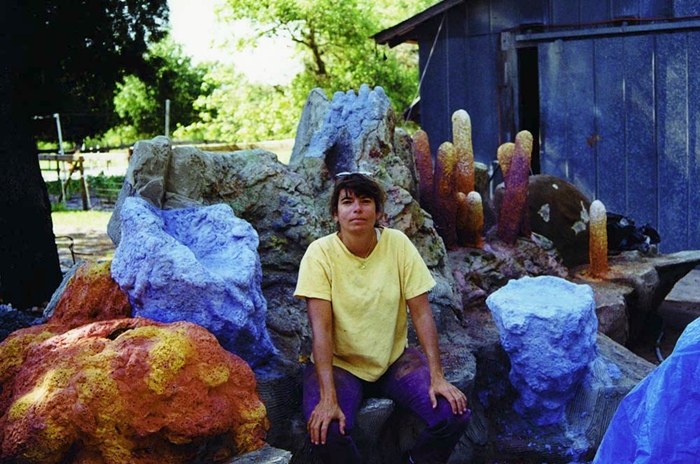 Once just thought of as a basic medium for sidewalks, utility flooring and parking lots, concrete has become the modeling clay for a new group of artists. These artists take concrete beyond the realm of simple slabs and block used for seating in public settings. Rather, these artists envision large-scale, abstract and naturalistic sculpture that have become the focal points in many of today’s commercial office centers, universities, public parks and recreation sites.

While using concrete as a backdrop to create imitation bricks and stone formations is nothing new, especially in hotel and amusement park settings, using concrete to create public art is. "Because it’s so easy to work with and durable, more designers and architects are giving concrete a spotlight when they make plans for public spaces," says artist Kia Ricchi of Centerline Production in St. Cloud, Florida. "I work in concrete because it is a structural medium that can be artistically manipulated. Concrete also has great durability and lends itself perfectly to the outdoors and heavy pedestrian use." 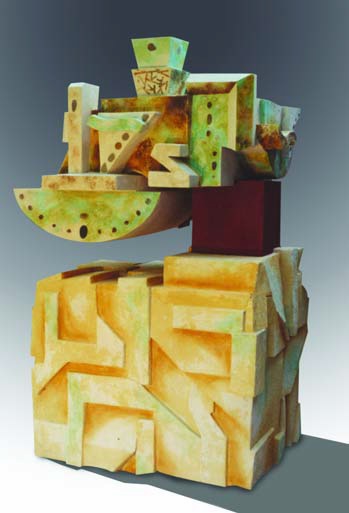 Art finds a home in diverse settings
Ricchi’s work has been displayed at the Orlando Museum of Art and the Ann Norton Sculpture Garden in Palm Beach. She has also designed art for urban environments. In one recent example of urban art, Ricchi created a sculpture called "Euclidean Fancy," an angular structure that stands about 8′ tall and measures 6′ deep and 6′ across. The work features geometric angles and shapes that are meant to complement the surrounding architecture. To keep the piece from becoming too cold or austere, Ricchi incorporated round river rock, natural textures and acid washes to soften the overall appearance. According to Ricchi, her goal in this project and others she constructs is to build a piece that will harmonize with its surroundings while generating visual interest.

After receiving her bachelor’s degree in New York, Ricchi spent ten years working as a sculptor and painter for Walt Disney World, Universal Studios and Sea World. As one might expect, these high profile theme parks proved to be an excellent training ground for creating large scale works of art that push the envelope of creativity on a daily basis. Her work at these parks provided Ricchi with a background in using concrete to sculpt large-scale props used throughout the properties. "Working at places like Disney and Universal Studios gives an artist a fantastic opportunity to work in all types of media to create textures that truly look like the real thing," Ricchi observes.

Ricchi was so intrigued with working in carved concrete that she started her own business, Centerline Production. Her company focuses on developing works of public art for clients like the Miami Zoo, the Florida Marlins and Blockbuster Video. Ricchi says that the whole concept of public art is a growing trend among corporations and local governments who want to support the arts by commissioning or acquiring works that provide direct access to the public. Art in public spaces has other benefits; property managers believe it boosts curb appeal and establishes a distinctive, upscale atmosphere. Ricchi adds that public art brings people together as they observe the work, or simply use it as a landmark or photo opportunity. 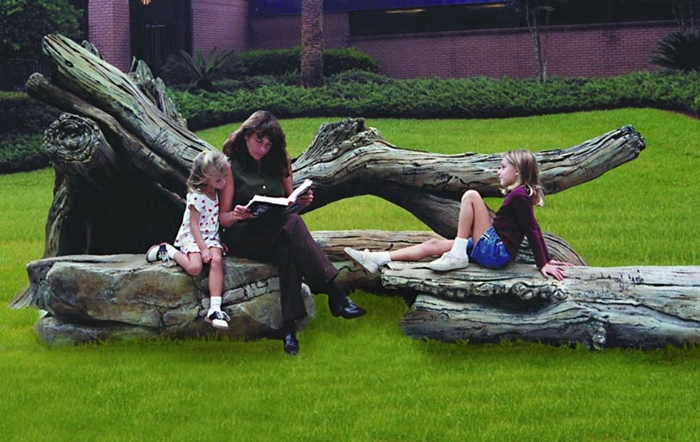 Public art can also serve as a theme for a whole community. One of Ricchi’s most dramatic pieces entitled "This Forest Primeval" was recently purchased by a new, upscale development whose builders are adapting to more environmentally friendly building methods to maintain wetland and wooded areas. The 14′ long by 10′ deep by 6′ high piece represents large fallen timbers set against stone formations that look very much like a scene in a forest. "I have always admired the twisted shapes of the southern live oak trees," Ricchi says. "The shapes seem to reflect the competition and struggle for rain and sun among the dense plant life in the deep woods."

In some cases, entire counties have made a commitment to supporting public art. In Hillsborough County, Florida, for example, the Board of County

Commissioners adopted a Public Art Ordinance, which established the county’s Percent for Art Public Art Program. The program allows the board to acquire works of art for county sites and facilities. The board hired Ricchi to design and fabricate a unique structure for the entrance of the Ed Radice Park, the largest sports complex for youth sports in Hillsborough County. 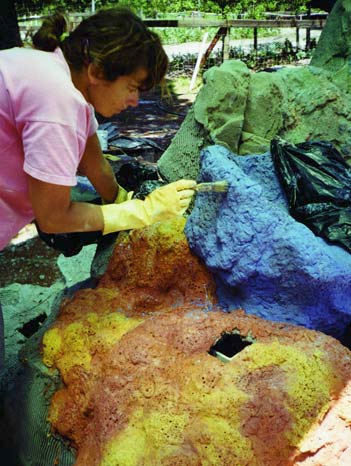 Commitment to the artistic process assures success
This project, like all the commissioned pieces Ricchi creates, was a collaborative effort between the client and artist. The process begins with a meeting to determine specific goals. For the project with Hillsborough County, Ricchi worked closely with the customer throughout the entire process to assure accuracy in artistic direction. The concept in this case was to create a large 14′ sports-themed montage featuring a baseball glove, bat and ball, and soccer ball sitting on top of a scoreboard styled platform. Working from drawings based on the ideas discussed, Ricchi developed a small-scaled model of the piece so that the client could have a preview of the finished art. According to Ricchi, providing a model is always a critical step; making changes at this stage is far easier than trying to alter direction much later in the process.

In many of her works, Ricchi employs structural engineers to create the steel armature, or frame work for the sculpture. To assure structural integrity, certified welders make critical welds at load bearing points. Rebar is attached to the primary steel and is used to create the general shape. All internal steel is treated with a 3-part marine paint system to prevent rust. The next step is the application of galvanized lathe followed by a concrete "scratch coat." Once dry, a second, thicker 1-3" coat of concrete is applied and Ricchi begins the carving process by using many hand made tools and trowels. 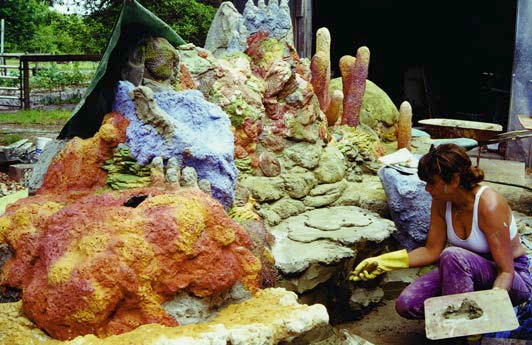 Ricchi ensures the longevity of her work by mixing integral color pigment into the concrete so that chips and scratches are minimized. "I like dry pigments for their great durability, UV resistance, and solid color throughout," Ricchi says. Depending on the type of project, Ricchi also uses acid stains to create dimension and shading. "Acid stains are ideal for creating natural looking surfaces," she says. When the job calls for paint, Ricchi is careful to apply specialty coatings made for concrete that will give the work a matte finish. Ricchi notes that solid painted surfaces typically have an unrealistic shine. All of Ricchi’s work from beginning concepts to finished art takes place at her studio, and depending on the scope of the job, can take several months to complete. When the work is done, flatbed trucks are used to transport the sculpture due to the large and extremely heavy scale of these projects (some as heavy as six tons). Once on location, the sculpture is maneuvered into place by a series of cranes and forklifts.

Maintenance for her sculpture is minimal due to the durability of the concrete and the coloring methods used. The exception is painted surfaces that may require retouching every three to five years due to fading.

According to Ricchi, the future looks bright for more public art projects like the ones she has created. "Public art is really taking off as more people learn to appreciate this type of artistic venue," Ricchi notes.