You’re 28 years old, your name’s Jeff, and you’ve just started your own company. Naturally you name it Jeffco. Well, if you’re Jeff McCool you do.

In the two-plus decades since McCool founded Jeffco, the company has grown from a three-man, one-truck operation doing small jobs out of Tuscaloosa, Ala., to a company with 70 employees (at its peak), a fleet of vehicles and some high-profile national accounts. Shoppers at Walmart and Sam’s Club stores, as well as museumgoers visiting the U.S. Space and Rocket Center, in Huntsville, Ala., and the Birmingham Civil Rights Institute have all walked on Jeffco’s concrete floors.

McCool started Jeffco in 1983 when the company he had been working for went belly up. That company specialized in pouring foundations for truck and railroad scales, which is what Jeffco did in the early days. But the company’s focus changed radically in 1986 when McCool returned to Alabama from a trip to the West Coast. While away McCool stayed at a hotel where he laid eyes on imprinted concrete for the first time.

The idea that you could color, pattern and texture concrete to make it look like cobblestones, slate, or other things that it’s not fascinated McCool. He returned to Tuscaloosa all fired up to start imprinting concrete himself. 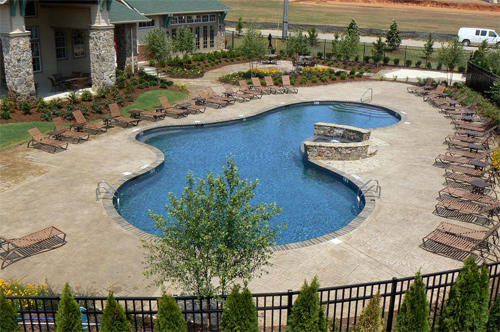 But nobody else in Alabama was fired up about it because nobody else there had ever heard of it. “I had to learn to be a salesman and develop the market,” McCool says. “I went from being a guy pouring concrete to a guy trying to educate these architects who didn’t know what imprinted concrete was.”

The architects liked it when they learned about it, and soon McCool was getting business. Within a year of the fortuitous West Coast trip, McCool devoted his company entirely to architectural concrete. After researching the handful of companies offering imprinting tools at the time, McCool settled on Bomanite, which pioneered imprinted concrete. Jeffco became a Bomanite franchisee then and remains one today.

In the 1980s, architectural concrete was limited to imprinting, exposed aggregates and a few fancy finishes – and Jeffco did all of that. When chemical stains, microtoppings and overlays came along in the 1990s, Jeffco was quick to adopt them. Likewise, when polishing first hit the Americas in the early 2000s, Jeffco jumped on it, becoming the first contractor in Alabama to do so.

“We’re always on the lookout for something new that will fit with what we do here, and when it came about that you could shine a floor but didn’t have to have a clear sealer or a wax on it, that really got my attention,” McCool says. 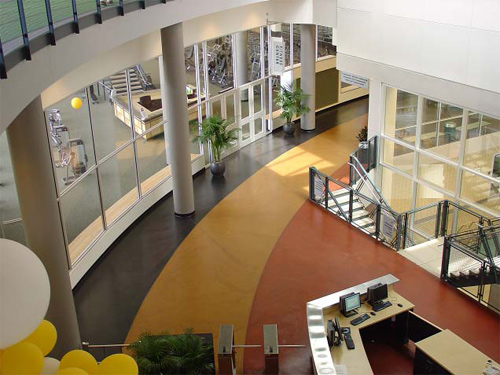 Polishing has taken off for Jeffco. It now makes up more than 80 percent of the company’s business.

“I’ve still got crews that pour and imprint with Bomanite, but the big thing here at Jeffco now is polished concrete,” McCool says. “It’s what pays the bills.” Just as Jeffco worked to develop the market for imprinting back in the 1980s, these days it’s cultivating the polished market. That can mean anything from networking with other Bomanite contractors, to talking with architects about the standards that distinguish true polished concrete from a cheap shine, to sample-polishing 100 square feet of oil refinery floor so plant officials can see for themselves how polished concrete holds up.

The state of Alabama has been on a public-school building spree lately, and Jeffco has put polished concrete floors in seven of them so far. McCool says that the move away from vinyl composition tile toward polished concrete in new schools is a direct result of the “lunch-and-learns” that Brian Short, Jeffco’s sales manager and “our polishing guru,” as McCool calls him, does with architects.

The lunch-and-learn goes like this: Short buys lunch for architects and pitches polishing while they eat. The architects get the continuing education credits they need as members of the American Institute of Architects, a fresh look at the merits of polished concrete, and a sub sandwich. 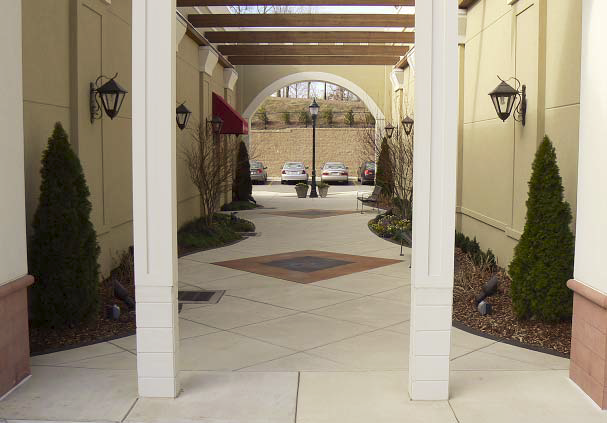 In terms of the sheer number of jobs Jeffco does, the polished floors in small to medium-sized commercial and retail spaces dominate.

Industrial plants are another ripe market for polished concrete. Jeffco has done several, including the 1.2-million-square-foot Mercedes-Benz manufacturing plant in Tuscaloosa County. Jeffco polished all 185,000 square feet of concrete aisleways running through the massive plant.

Among the retail chains for which Jeffco has installed polished concrete floors are Sam’s Club, Lowe’s, Dollar Tree and Walmart. While a 100,000-square foot retail store may look like the Holy Grail of jobs, box stores are actually some of the lowest-margin jobs you can find, says Short, the sales manager. And huge jobs like that – where you’re chasing so many painters, electricians, and other contractors who aren’t always finished being where you want to be – are rife with frustrations, he says. 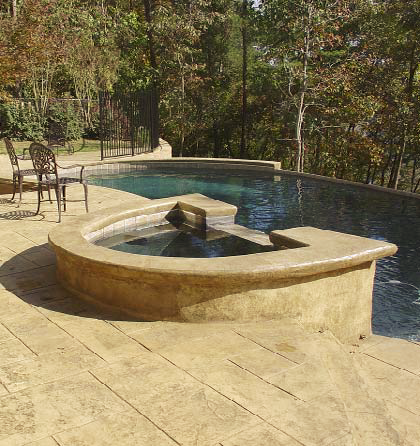 Jeffco’s crews are often on the road and out of state. “We try to stay on this side (east) of the Rocky Mountains, but we’ve gone as far west as Las Vegas and Phoenix and as far north as Massachusetts,” McCool says.

Wherever Jeffco goes, it brings the diesel generators that power its polishing machines. “The lights could go out in a city, and we’ll still be able to work,” McCool says.

Jeffco has grown steadily over the years. By 2007 it had outgrown the 15,000-square-foot facility it called home, and McCool started construction on a substantially larger place. Its new headquarters has 50,000 square feet of warehouse space and 6,000 square feet of office space. The whole facility is like a giant sampler platter of Jeffco’s various products. The warehouse is outfitted with polished concrete, each office features a different concrete dye color, and acid stains and microtoppings are displayed in the office area in multiple colors. A 300-foot-long outdoor walkway along one side of the building features a different type of textured concrete every five feet. 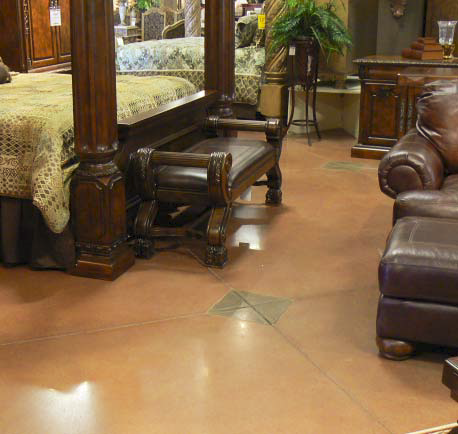 “A lot of customers and architects come to our facility to walk it and see what we can do,” McCool says.

As welcome as the roomier facility was, the timing couldn’t have been worse, opening at it did in January 2008 – just at the global economic crisis was about to get really bad. “Like everybody else in this economy we had our bumps and woes,” McCool says. “Things went south on us, and we really had to trim back and cut costs.”

That included reducing inventory and giving up the janitorial and landscaping services.

And a polishing machine – or rather, a company with 20 polishing machines and the capacity for a lot more. “We designed the new facility with room for up to 100 machines, if we want to go that big,” McCool says.

“Our future is in polished concrete,” he says. “Imprinting has already crested and is on the downhill slide. Polishing is on the uphill run.” 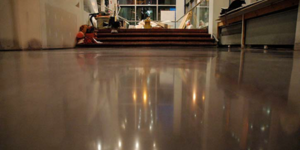 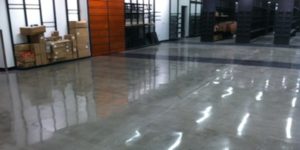