Colloidal silica was introduced as a concrete densifier many years ago, and it has proven itself a reliable tool for concrete polishers and others needing to harden or densify cured concrete surfaces. However, there seems to be widespread confusion about what it is, and this confusion sometimes leads to misinformation. This article attempts to bring some clarification.

The easiest way to clear the confusion is, first, to get the names of the players straight.

Silica is the common term for silicon dioxide (47 percent silicon and 53 percent oxygen, by weight). Quartz crystals are silica. So are some kinds of sand.

When water is added to cement powder, it reacts and forms compounds called calcium silicate hydrates (CSH). As a byproduct, it also forms hydrated lime (calcium hydroxide, also known as lime, slaked lime and portlandite but not to be confused with free lime, a different substance). Hydrated lime can constitute up to 25 percent of hardened cement paste but adds no strength to the concrete.

Colloidal silica is a mixture of a liquid and silica particles. It is a colloid, not a solution. In a solution, the solvent (such as water) breaks the “active ingredient” down to individual molecules. A colloid has larger particles, solids, that stay suspended in the liquid, carried by it but not broken down by it. Milk is a colloid.

Colloidal silica cannot be made simply by mixing silica into water. The high-tech industrial process begins by stripping sodium (and a considerable portion of contaminants) from sodium silicate and then suspending the purified silica in a low-surface tension liquid.

The term “colloidal silica” always refers to a liquid material. It should not be confused with silica fume, a dry, powdery material used as a concrete admixture that has particle sizes of about 150 nm (about 6 millionths of an inch).

How densifiers densify
All concrete densifiers react with the useless calcium hydroxide and turn it into useful CSH. Since calcium hydroxide is intermingled in the hardened cement paste, the reaction creates additional paste inside the pores of the existing paste. The paste gets denser, which makes it harder.

It is sometimes claimed that densifiers make new CSH crystals. This is inaccurate. Cement paste is not a crystal to begin with. Crystals are molecules stacked together in a regular, repeated pattern. In contrast, CSH is technically a gel. The molecules are packed together and hard (not squishy like the gel in the toothpaste tube), but they do not form a regular, repeated pattern. The CSH made by densifiers is functionally equal to the original paste.

Differences in silica
The goal of all concrete densifiers is to deliver a reactive form of silica down into the microscopic pore system of the cement paste. They all use a liquid to carry the silica. The differences are in the form of silica and how the silica is made to stay in the liquid.

Colloidal silica delivers virtually pure silica in nanoparticles small enough to penetrate the pore structure. The liquid has very low surface tension and carries particles below the surface. The pure silica particles have a relatively higher proportion of reactive sites than silicates, so they react very efficiently.

In the pores, colloidal silica creates new CSH that bonds to the existing CSH. Colloidal silica also bonds directly to other silica, including itself. When applied to concrete, it reacts, bonds and then uses that bonded silica as a platform for additional bonding. Silicate densifiers do not do this.

Silicate densifiers are compounds of silicon and a high proportion of mineral salts. (Sodium silicate molecules, for example, are 38 percent sodium by weight and only 62 percent silica. Commercial sodium silicate has even lower silica content due to contaminants.) They are also colloids, but the particle size is highly variable. Sodium silicate, for example, can range from 2 nm up to 500 nm. When silicate densifiers release silica to form CSH, they leave behind the mineral salts. This is why sodium silicate and potassium silicate must be scrubbed off, to prevent the residual salts from forming hard, discoloring deposits. Lithium silicate also leaves deposits if it is overapplied. Colloidal silica is 99.5 percent pure silica, so residual deposits are not an issue.

Because it can be applied to build up on the surface, colloidal silica can be burnished to a high sheen in a way not possible with silicate densifiers.

Performance
There are no real standards for densification. However, properties such as abrasion resistance and surface hardness are considered indicators of densification. Colloidal silica densifier has been tested in the lab and in the field using the same methods used for other densifiers. It is effective at hardening for polishing and for other floor-finishing operations. It eliminates dusting and improves abrasion resistance. It is a clean, ecofriendly densifier that minimizes labor.

Colloidal silica has also recently begun to be applied to freshly placed concrete, formulated with special additives as a troweling aid. Not only does it extend finishing time and make finishing easier, but it eliminates the need to add excess water in order to achieve a smooth surface, thereby delivering a slab that is at least as hard as intended in the mix design. In fact, use of the colloidal silica troweling aid showed significant performance improvements over slabs finished with extra water or finished dry: increased surface hardness (25 percent to 30 percent), reduced tendency towards ASR pop-outs, and reduced curling. 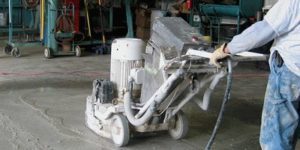 Choosing the Best Densifier for Your Polishing Project 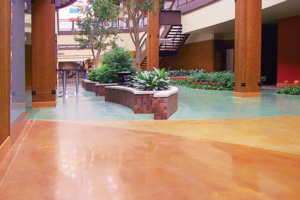 Understanding the Unique Properties of Hardeners and Densifiers 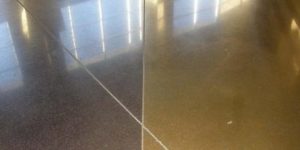