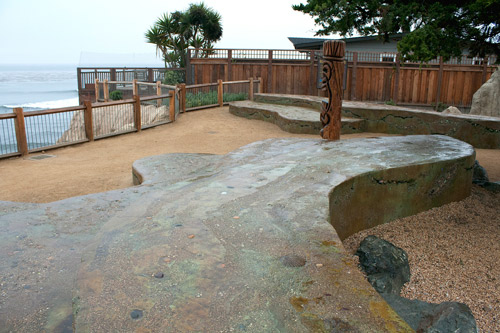 “They had a general idea of what they wanted,” recalls Ralston. “Decorative concrete terraces to serve a couple purposes — a place where people could sit and watch the surfers and the ocean, and a convenient spot for surfers to prep their boards for the near-perfect break of the waves at Pleasure Point.”

Once Ralston was hired to consult on forming the terraces, he began suggesting how stains, shells, glass, stones and sand could be used to turn Stone’s terraces into artistic concrete. “I had terrace models made of cardboard that she provided,” Ralston says. “I had to tweak all of the details, not only to make it work, but also to make it look, in my humble opinion, like it really belonged to the site and was done in a timeless and tasteful way.”

The project proved to be anything but breezy for Tom Ralston Concrete Inc. “We’ve done some challenging jobs,” says Ralston, “but this project may have been one of the most taxing ever for our company.”

The job went up for bid in early 2011. Tom Ralston Concrete’s hat ended up being the only one in the ring as two other concrete contractors pulled out of the bidding process.

Ralston says he had a moment of “uh-oh” when he found out the job was theirs, especially since he had dropped about $20,000 from his original estimate. “I didn’t think we could compete at the numbers I came up with, and I really wanted the job,” he says. “At the same time there were so many challenges involved. But we’ve faced challenges before and I was confident that through collective brainstorming, we’d figure this job out too.”

What the committee originally envisioned, according to Ralston, was a series of serpentine curved concrete terraces with surfer-type paraphernalia embedded in the concrete. Things like surfboard fins, a surfboard leash and cans of surfboard wax. Not exactly fine art.

“Their hearts were in the right place,” says Ralston, “but seriously the idea of that kind of stuff embedded in concrete seemed cheesy to us.”

Ralston campaigned for something more sophisticated: a series of curved terraces with pockmarks, veins, and random smoothed edges that mirrored the look and feel of the geostrata that’s exposed on the beach at low tide. The committee, hesitant at first, ultimately embraced the idea.

“At first they didn’t want to let go of their surfing motif. But after they saw several samples of vertical and horizontal surfaces mimicking the surrounding geostrata they really bought into it,” says Ralston. “Not only did they like the idea of pockmarks and veins loaded with glass and rock, but they really liked how the fossils were stained and how the mock-ups included embedded things like sharks’ teeth, fossilized scallop shells and sand dollars, beach glass, sand, and — well, why not? — a concrete cast of a 5 million-year-old whalebone.” 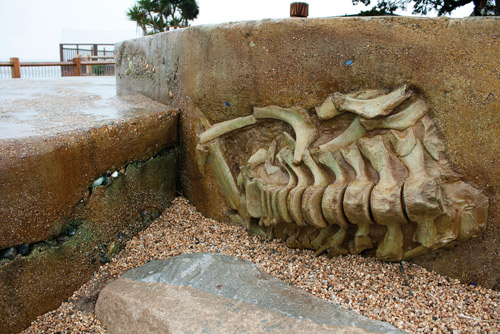 Embeds in walls
Some of the challenges of the job had to do with the makeup of the committee. Contractors were required to clear everything through them and they wanted to be involved in every aspect. The landscape architect and the Redevelopment Agency wanted to be on-site for every concrete pour, for example, so pours had to be scheduled around their availability.

Other challenges included working during the rainy season, which Ralston had argued against and lost. That required tarping of the job site on several occasions.

“The pours were tricky enough without adding another element to them,” says Ralston. “They wouldn’t let us push the project past the rainy season even though I tried on many occasions. Having to build a structure and then work under tarps just added another level of difficulty to the job.”

However, the complexity of the job mounted the biggest challenge. It called for pouring vertical surfaces incorporated with embedded material, as well as figuring out how to make molds of the fossils and whalebone.

“Part of the problem was the size and the shape of the terraces,” says Ralston. “The tallest wall was just shy of 4 feet high, and they all had really tight curves incorporated into the design that needed to be easily stripped so that we could add embedments and then finish the concrete. The incredible weight of the concrete required that we build very strong forms. The largest terrace was more than 36,000 pounds of concrete.”

To achieve the veined look in the vertical surfaces the Ralston team incorporated several different techniques. They would stop pouring intermittently during placement to place layers of the vein material.

When the forms were stripped, they hand-seeded the vertical surfaces with aquarium sand, beach glass, multicolored stones and seashells. They threw sand and glass at the concrete to embed it in a random pattern. Finally they hit the surface with floats to further embed the materials. Some of the surfaces were sandblasted.

Their embedment plan created a challenge of its own — the forms had to be pulled only 2 1/2 hours after the concrete was poured. Consequently concrete had to be placed at a stiff slump (about 3 1/2 inches). Once the forms were pulled, the crew had about 2 hours to seed the terraces and embed cast fossils before the concrete became too stiff. 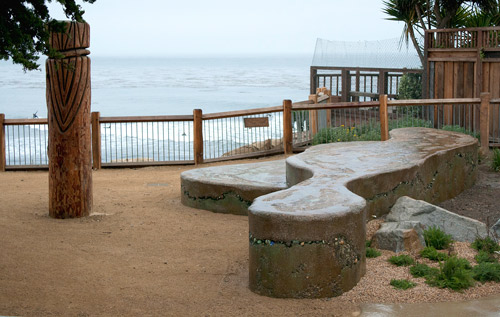 A whopper of a whalebone
The committee enlisted a paleontologist to authenticate the various fossils used in the job as well as oversee the molding of them. A bronze caster and sculptor was hired to create the molds.

“Once the molds were made, we had to come up with the right mix design and then acid-stain it with different colors to make the pieces look realistic,” recalls Ralston. “That involved a fair amount of trial and error, but we finally arrived at mixes and stains that worked for each fossil. We ended up with three different mix design formulas.”

The 350-pound whalebone was by far the most challenging, says Ralston. It was cast from an actual fossil unearthed about 300 yards from the site. “First of all, the bone was in disrepair before we even made the mold. Then it took two mock-ups with different mix designs and reinforcing schedules to get it right. Once that was done we had to figure out the right combination of stains so it really looked like a whalebone.”

Ralston and the Committee viewed the whalebone as the centerpiece of the project, so they wanted it placed for maximum exposure to both park visitors and passersby. The best placement happened to be on one of the most severe curves in the upper terrace.

How do you set a flat 350-pound piece of intricate concrete in a curved surface? Ralston and his team did it by carving out the curved concrete to create a flat surface for the piece to be inserted into. “The first attempt was rather ugly and the bulk of the concrete that was carved out all came down into one miserable heap. One of the project managers from the city park division asked if this was a common occurrence and our foreman, trying to calm her, said, ‘Ahhh sure, happens all the time.’ With a combination of hard work, optimism, and tenacity we were able to put Humpty Dumpty together again.”

The Ralston team had poured the bone with 5/8-inch rebar dowels extending out of the back of the piece. The dowels were forced into the terrace, and the bone was held in place with bracing while the terrace cured.

Finish staining was as artistic and challenging as the rest of the job.

“We used a lot of brown and green acid stain combinations to mimic the natural colors that were on the beach next to us,” says Ralston. “Like with everything else on the job, we tried a lot of different combinations in samples before we hit the right recipe.”

And that was the key to this job, according to Ralston: samples and more samples, test pours leading to more test pours, and then getting approval from every group involved.

“During each pour we had an inspector from the County of Santa Cruz, a field supervisor from the public works department, the head of the Parks Division (who oversaw the project), the landscape architect, and the field supervisor for Pavex Construction, who was the general on the job, all putting in their suggestions. ‘Can we have a little more aquarium sand here?’ or ‘Don’t you think the whalebone should go here?’ All of this on the frigging day of the pour!”

Most challenging aspect: Using first-time techniques on both vertical and horizontal surfaces, casting a whalebone fossil to create a 350-pound concrete whalebone, working through a committee of 10 representing five entities, pouring in the rainy season. 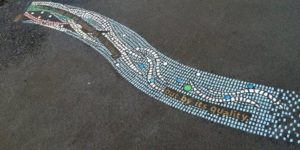 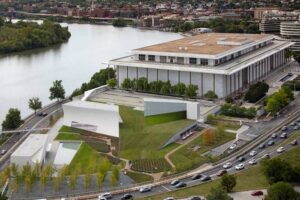 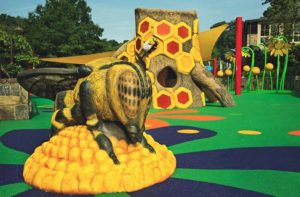