The bold vibrancy of the stucco walls, done up in a daybreak yellow and burnt orange palette, was the result of a geographic expansion of vendor selection. “The challenge was in finding an East Coast vendor with color as vibrant as you’d find in concrete on the West Coast,” says New England Hardscapes president Rich Capachione. His solution was to choose the bold offerings from Merlex Stucco, of California. 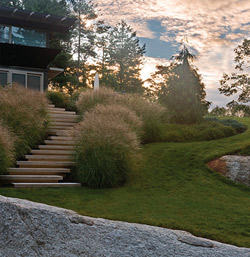 The homeowner called for a look that would complement the property’s sleek, modern architecture in its woodsy, 5-acre setting. This blend of contemporary and rustic was Capachione’s starting point in providing a design that could live in both worlds.

Wheat Medium, a sandstone-colored pigment from Prism Pigments, was used as the base color in the flatwork pour, topped by Ash White Lithochrome Color Hardener from L. M. Scofield Co.

And then came the salt. Good old-fashioned rock salt — yes, the kind you sprinkle over pavement in icy weather — provided a glittery, jagged and intriguing texture. “It’s an old-school technique from before stamping came into vogue,” says Capachione.

The rock salt is used to create a pitted texture in the concrete that mimics the variegated porous appearance of travertine. 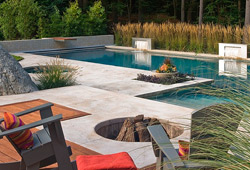 First, the rock salt was tortured: crushed, run through a sieve and mashed with tampers until no particle was larger than perhaps a half inch in diameter.

Then, the team broadcast it and made one more pass with a trowel, leaving the tops exposed a little bit, says Capachione, “The rock salt starts to break down when introduced to the surface, and we work to embed the rock salt. And then the next day it’s washed out of the surface. What’s left is a nice irregular indentation in the surface. At that point, we cut our custom pattern into it.”

This uniform square pattern was determined by the control joint placement, which had to be integrated into the pattern. “We typically cut the pattern in with a Soff-Cut X-50 hand-held saw and a series of custom diamond blades,” says Capachione.

His crew then waited five or six days before applying a mild acid wash. “This creates some color separation between the color hardener and integral color,” he says.

One week later, the surface was topped with a diluted acrylic sealer, which helped bring out the color.

Capachione offers on-site training to contractors who’d like to learn this custom technique. Terracing and water challenges
Among the project’s top challenges was the elevation. The pool sits much lower than the house and the rest of the hardscape. That meant major drainage hassles from a hillside lined with loam that washed into the pool during a fierce rainstorm early in the project. Two feet of mud had to be cleaned out of the pool, according to Capachione. The general contractor had to solve the problem with an effective drainage system before they could proceed.

The next challenge was the quantity and tonnage of all of the concrete stairs that had to be constructed to hold the tri-level project together.

“There were about 25 steps in all,” recalls Capachione, “some of which were as long as 20 feet. We poured all of the risers on-site, but had to precast the treads in our shop and set them in place with an excavator.” Heavy machinery was required because each precast tread platform measured 3 feet by 8 feet with a 4-inch thickness.

Since these massive structures would be subject to intense freeze-thaw during the harsh New England winters, Capachione’s crew had to set the footings 4 feet below the frost line. “That was pretty expensive form work,” he recalls.

Concrete waterproofing became even more of a factor with the several steps that led directly into the pool. “We had to find a sealer that could withstand that much water, and we found what we needed from Richard James Specialty Chemicals.”

Despite all of the time and effort with the stairs, Capachione is gratified by the results. “The 6-inch cantilevers on the steps give a nice reveal to it.”

The award-winning project took about six weeks in the summer of 2008. At the end of that time, the homeowners were rewarded with a grand setting that united the natural and the contemporary. Duration of project: Six weeks in the summer of 2008

Most challenging aspect: Just less than 5,000 square feet of tri-level backyard hardscape, including large steps, fire pit, pool surround and multiple stucco walls. The steps leading into pool made out of same concrete surface as patio.