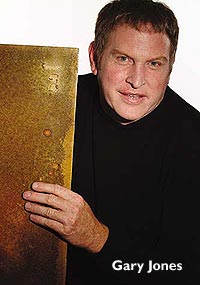 The meditation room in San Francisco’s new Asian Art Museumhas a domed ceiling, a single bench and a gurgling fountain cut from a basalt boulder.

No paintings hang on the walls of the tiny 6-by-12-foot space, but artwork of a different sort lies underfoot: a polished concrete floor, integrally colored with taupe, stained with metallic salt, and washed with a hint of ocher that plays off the patina of the rock.

The floor was created with a cementitious topping known as Pentimento, a product from Colormaker Floors Ltd., a small company based in Burnaby, British Columbia.

Designed by Mike Miller, The Concretist, it was hand troweled by Gary Jones, Colormaker’s president.

It’s really not surprising to find a Colormaker floor in an art museum, considering that Jones describes his company as “An artistic operation using concrete as our medium, versus a concrete company with artistic applications.”

Nor is it surprising to find Jones with trowel in hand at a client’s pour. “Not only do we supply the materials, we go along with the materials,” says Jones.

Jones and Miller are long-time associates, and Miller is part of Colormaker’s network of artisans. But in the case of the meditation room, Miller deferred to Jones’ skill with a trowel. “I’ve never found anybody who can trowel quite like him,” Miller says. 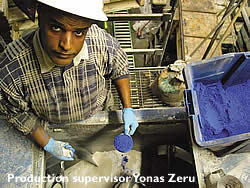 Colormaker generally sells its product to end users rather than distributors so that the company can provide training and support. In most cases, Colormaker relies on a small network of regular clients who act as consultants and trainers, but sometimes Jones goes himself. The company also teamed up recently with Bob Harris of the Decorative Concrete Institute in Atlanta, who will provide training and distribute its product line on the East Coast.

Colormaker’s overlays can be found throughout the U.S. and Canada in locations such as Starbucks, Whole Foods grocery stores, Sur La Table kitchen stores, Rainforest Cafe restaurant and retail outlets and the Bootleggers chain of restaurants and brew pubs. 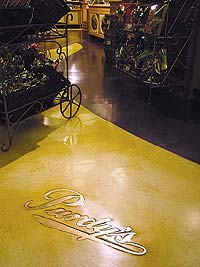 “Our main clients install floors for restaurants, clothing stores, high-end retail, art galleries and projects of that nature,” says Jones. “Residential is the smaller side of our business; I’d guess it’s about 30 percent.”

Skill with a trowel a plus
Colormaker’s overlays aren’t for everyone. They’re aimed primarily at artisans adept at hand troweling. “We’re a little different in that respect,” says Jones. “Everybody’s pushing for self-levels because it’s very easy on installers. We try to create more of an artisan finish. There’s more training on our side.” 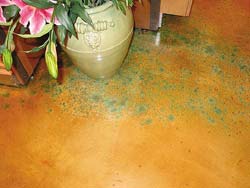 In fact, Jones won’t even sell Pentimento, Colormaker’s core product, to anyone who hasn’t been trained to install it. Based on an old Italian formulation that Jones has updated with modern admixtures, Pentimento produces a marbleized, highly polished finish. It goes on about 1/8-inch thick and can take multiple re-trowelings, with each pass giving the surface an increasingly polished appearance. One or more layer of Pentimento Finish can later be applied to enhance depth and color.

Jones regularly organizes seminars and workshops on Pentimento and its color possibilities, but the best training happens at a job sites, he says. “We have an agreement with some of our installers where we can bring somebody on and teach them,” he says. “You get two or three jobs under your belt, and you get so much more confidence than just seeing it go down at a seminar.”

For highlighted trowel textured concrete floors, Colormaker produces Sgraffino, which goes on paper-thin and has a grainy consistency. Trowels tend to skip over the surface, creating a chattered finish with subtle color variations.

The company’s newest topping is called Rotofino, which gives a polished finish but requires less skill to use than Pentimento. For polished concrete floors suitable for stamping, Colormaker offers Pasto, which goes on thicker than Pentimento. 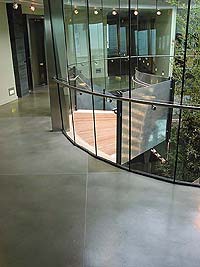 All of these overlays come in gray or white, and all can be integrally colored, stained, dyed or any combination thereof.

• Colorfast, a blend of iron oxide pigments and rapid dispersing agents that installers mix on site for integral color. Primary colors can be blended and load levels altered to produce thousands of different colors.

• Patina Etch, an acid stain that reacts with free lime in the cement to highlight irregularities. It creates variegated earth tones, similar to the patina of bronze or the oxidation of copper.

• Deco Graphic Dyes, solvent-based penetrating colors that are sharp and translucent, are suitable for overlays or existing concrete.

• Someru Dye, a water-based dye for a pastel watercolor look. It works well when layers of color are desired. 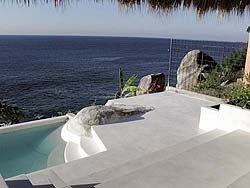 The company is currently developing a line of colors made with all-natural pigments, which allow for more variance within a color and a more natural look, Jones says. “Think of the age-old colors of Europe, in Italy and countries like that, where they use natural pigments mined from the earth as opposed to manufactured iron oxides,” he says. “We’ve started pushing down that road.”

The company has also started to push beyond North America, with Colormaker toppings now available in Japan and in Jones’ native Australia.

Rainy climate inspires shift in business
It was in Australia that Jones started working with concrete toppings, back in 1972. “We’d mix three shovelfuls of pebbles to one shovelful of cement, lay it down about a half-inch thick, then wash it off to expose the aggregate for exterior decks,” he says. From there he moved to installing slate tiles. In 1989, he married a Canadian and moved to Vancouver, where he opened a slate business. On the side he did stamped concrete, but the demand for concrete soon outpaced the demand for slate, and he shifted to concrete entirely in 1992. 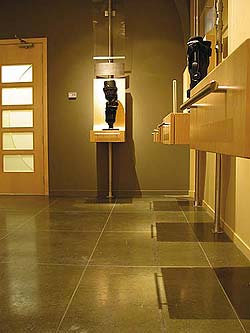 Before long British Columbia’s rain encouraged another shift. “I thought ‘how can you run a business by the weather?’” Jones says. “So in ’93-’94 we started pushing more into the interior market, and by ’95 we were solely doing interiors and just dropped doing stamped concrete altogether, although we still have the product range.”

Jones and Miller have been working on each other’s jobs since the early 90s, when Jones saw Miller’s work at a World of Concrete show and hired him to develop a stain formulation. Miller was impressed by the pioneering work Jones was doing with overlays.

At the time Jones’ overlay formulas were similar to the thinset formulas used to set slate, Miller says. “Where it was new technology for architectural concrete, it was old technology for stone,” he says. 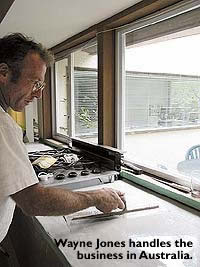 Like Miller, Jones embraces a freeform approach to decorative concrete, though he dislikes that term and prefers to call it “tactile and sensory concrete.” He looks at a floor as a starting point in much the same way a painter looks at a canvas. He likes the hand-crafted look, and would rather not spend a lot of time cutting grids, bands, borders and whatnot.

“We’re actually using the floor as a piece of artwork,” Jones says. “It seems destructive to cut up the Mona Lisa into squares. You leave her alone.”

For more information you can visit the Colormaker Floors Web site.