Project superintendent Chris Hampton had never used Skudo floor protection products before the Turner Middle School project in Kansas City, Kansas. Now, he says, he won’t use anything else.

“I heard about Skudo during superintendent meetings when we were discussing different products that could be used,” says Hampton, employed by the general contractor McCownGordon, a major construction company headquartered in Kansas City, Missouri. The team decided Skudo would best fit Turner Middle School’s needs.

In the past, when Hampton needed floor protection, he used Masonite, plywood or another company’s temporary covering. However, if these coverings shift, “You run the risk of contaminating or staining the concrete or not protecting it at all,” says Hampton, whose specialty focuses on K-12 schools. On this project, he needed to protect stained and polished geometric shapes in the commons — the showpiece of the school.

With the Skudo Heavy-Traffic (HT) Commercial System, the two-part protective covering stays securely in place. The system consists of a water-based liquid base coat applied first. This is followed by a coated commercial mat pressed into the wet base coat to form a heavy-duty, slip-resistant, breathable barrier. This barrier has earned Skudo Commercial the highest slip rating in both wet and dry conditions in laboratory tests.

Unlike other temporary floor coverings that just sit on the surface, Skudo HT Commercial adheres to it. This adhesion greatly reduces the risk of trips or equipment snags. It also doesn’t allow the covering to shift or move with site activity or high winds.

Skudo HT Commercial can stay in place for up to 12 months. Before framing the interior walls for the 95,000-square-foot school, Hampton completed polishing 25,000 square feet of concrete in the commons. He estimates Skudo HT Commercial protected the commons’ floor for seven to eight months without incident.

To keep the Skudo HT completely intact, “There was a tad bit of maintenance involved,” to damaged areas, Hampton says. “We were very diligent in switching out pieces.”

He explained that while the floor was covered, welding was happening overhead. Yet the Skudo HT endured. “It held up great. Nothing penetrated it,” he says.

When something like a ladder, power jack or pallet ripped the covering, the thick top layer stopped the damage from going all the way through. Subsequently, in those areas, Hampton’s crew would cut out the damaged square. They would then apply more base coat and press a new piece into it. “It all bound back together into one monolithic piece,” he says.

Once the patch was secured in place, it provided the same protection as the original covering. “There was no downside to having (the covering) patched,” Hampton says. “Nothing, not even water, got through.”

Hampton says when you order the Skudo system, order a 15-20% overage to cover repairs and scrap pieces.

Skudo representative Daniel Osden performed a 30-minute demo to teach the McCownGordon crew how to properly install Skudo HT Commercial. Involving specialists from Skudo from the beginning is crucial to a project’s success, as there’s no one-size-fits-all in terms of protection.

“He gave us a session on the ‘Dos and Don’ts’ of the product. He talked about the mil thickness of the base coat, stressing thicker is better than a thin layer,” Hampton says. Because it gives the top layer more to adhere to, it makes removing the covering that much easier, he adds.

Osden also explained the conditions needed for the base coat to set up properly. He said to hold off if certain water conditions were present. “My guys took it from there and had no problem with the rest of the job,” Hampton says. It took a three-man crew about a week and a half to install the 25,000 square feet of covering.

When it came time to pull up the Skudo HT Commercial, Hampton admits he felt a bit nervous. “I didn’t know if it would extract the stain on the concrete,” he says, as it was topically stained Midnight Black with Ameripolish SureLock. “But we didn’t have any issues at all.”

When the covering was lifted, little residue remained on the surface. “What was sporadically there, you could wipe up by hand,” he says. “We just ran a power mop over the top. The shine was great, there were no stains or imperfections, and the owner was extremely happy.” 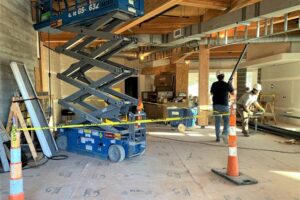 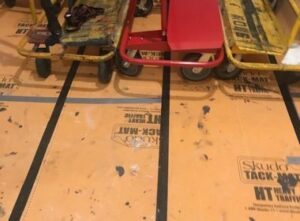