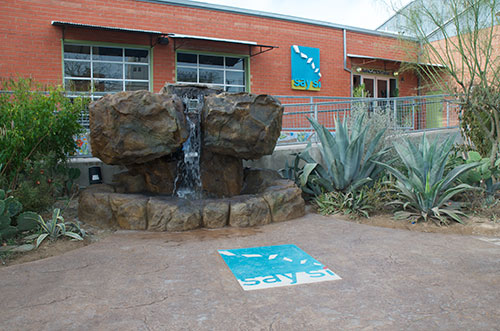 Transforming more than 5,500 square feet of flooring surfaces, creating a vertical sculpture and constructing a waterfall is no small task, especially when the majority of the work is done over just two days. However, that’s exactly what happened at SAY Sí, a teen art center in San Antonio, Texas.

The work was completed as part of the hands-on workshops at the 2012 Concrete Decor Show, held Feb. 20-24 in San Antonio. Rather than working on a temporary slab, students in these workshops got hands-on experience while creating long-lasting projects for the community.

Greeting guests to SAY Sí is an elaborate front garden, complete with hardscaping largely crafted by the students in Jason Geiser’s “High-End Stamped Concrete and Custom Features” workshop. Attendees joined a crew from Geiser’s Ohio-based company Deco-Crete Supply to stamp more than 600 square feet of concrete, add colored borders and bands with color hardener, and stain individual stones within the stamped pattern. To improve the surface’s high-end look, grout was applied between the stones before sealing.

The real highlight of the project is the approximately 100 fiber optic lights that surround a glow-in-the-dark SAY Sí logo. They were installed by Geiser’s team.

Adjacent to the lighting feature is a large waterfall constructed by StoneMakers Corp. Using their new LedgeFalls waterfall panel system, the New Hampshire company utilized poured concrete to construct the pool area and lower rocks, and they employed GFRC panels to create the upper-level rocks.

Just above Geiser’s stamped project is SAY Sí’s front entrance, which was made over as part of a preshow project (described in the February/March 2012 issue of Concrete Decor). A concrete bench constructed at a workshop led by West Virginia artisan Justin Burd was placed there as a final element.

At the back of the building, Nathan Giffin of Illinois-based Vertical Artisans was tasked with beautifying a space that will eventually be turned into a garden area. Playing off that theme, he created a faux wooden door textured with a skin from a tree native to southern Texas. On either side of the door are sculpted rocks, and a wood-like header completes the frame around the door.

“We took one of the most undesirable areas of the facility and turned it into something very desirable,” Giffin says.

After an initial grind and treating some particularly poor areas of the floor, the crew brought it up to 400 grit. Next, Rachel Knigge-Bruce of Floormap Stencil Designs helped apply a stencil to create four bands of dyed color, and the floor was brought up to a 3,000-grit finish. Henry also noted that the floor was treated with a sealer that is UV-stable because it is exposed to a large amount of natural light.

The colored bands in the Visual Arts Studio don’t end there. They appear to flow into colored bands that Bruce and Tennessee artisan Ryan Samford, of Epo-Floors LLC, created as a side project in the facility’s vestibule area, on the other side of a doorway from the studio. The bands and main floor surface in the foyer were epoxy rather than a polish and dye job.

Directly off the foyer is SAY Sí’s WAM (Working Artists and Mentors) room, where high school students mentor and teach middle-school students in visual and media arts. In that space, George Lacker of Florida-based GLC3 Concrete conducted a workshop that explored applying and polishing a 1/2-inch overlay.

“We had people from our class running and bringing other people over,” Lacker says. “People were amazed with what we could do with a half-inch overlay.”

The Black Box Theatre serves as a 2,000-square-foot performance space for the facility. There, Troy Lemon, president of Michigan outfit Cornerstone Decorative Concrete, applied various metallic epoxies and polyaspartics on three quarters of the floor.

Finally, Trevor Foster of Miracote and Bill Young of Utah-based Concept Art and Design made over a portion of SAY Sí’s art gallery with the use of polyaspartics. Because the space is used to display artwork created by SAY Sí students, it was necessary to keep the floor subtle to not detract from the work on the walls. With that in mind, earth tones were used in a simple design of circles and soft lines.

After just two long days, the renovations were complete. This accomplishment would not have been possible without the support of trainers and students — as well as the manufacturers who donated products.