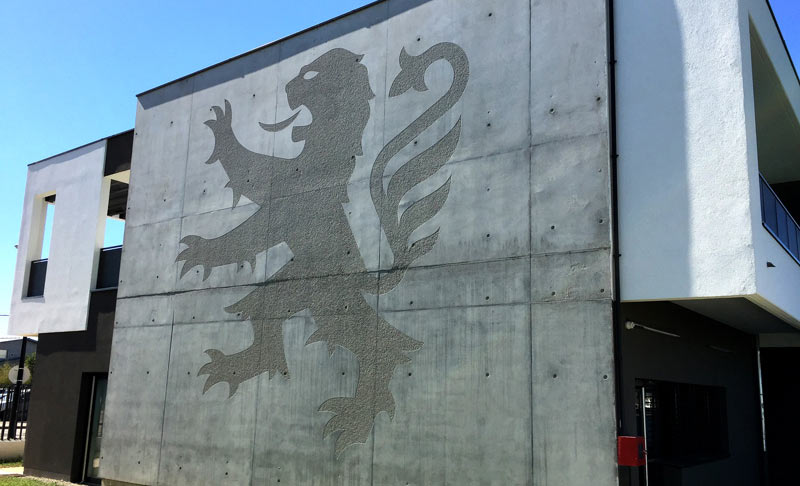 A glance around the globe reveals interesting concrete design interpretations with concrete as the medium. A couple of eye-catching entries…

A combination of specially designed concrete mix and highly skilled artistry produced a striking façade sculpture on the exterior of a new athletic facility in Meyzieu, France, outside Lyon.

Global concrete producer Cemex supplied a range of concrete for the structure and the artistic façade depicting the lion emblem of the Olympique Lyonnais football club. The facility is a training and residential center, known as France’s premier athletic mixed-training destination. It includes football (soccer) fields, training buildings, classrooms, a library and restaurant.

The lion sculpture was created by hand with stencils used to outline the shape. Two artists worked over a six-day period, using a serrated-edge jackhammer to lift a layer of concrete from the surface within the border of the design element. Precision with chisels was required to engrave detailed features such as the claws.

For the sculpture façade, Cemex supplied a bush-hammered concrete using a tailored mix of its specialty architectural concrete. The concrete was poured in 60-centimeter bands into metal formwork panels, avoiding blistering on the wall surface.

In Korea, an avian abstraction

In the category of “use your imagination,” a concrete home by South Korean architect Moon Hoon is billed as the house that looks like an owl.

Illuminated from within at night, the residence features a glaring owl.

The house in the South Korean port city of Busan “takes on a defensive and protective appearance with carefully positioned apertures providing external views out, while simultaneously providing privacy,” designboom adds.

While the exterior has been defined as “exposed concrete,” no further details have been given on the concrete material.

More images and comments by the architect are posted at dezeen.com.

No word of any hooting or hollering from the neighbors.