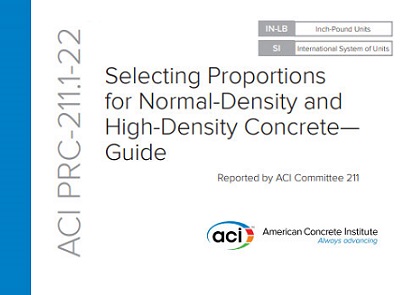 The American Concrete Institute has released an updated version of ACI PRC-211.1-22: Selecting Proportions for Normal-Density and High-Density Concrete—Guide. This guide to concrete proportioning provides background information on, and a procedure for, selecting and adjusting concrete mixture proportions. The update is a significant and timely major revision of the guide.

ACI Committee 211–Proportioning Concrete Mixtures has revised the entire guide to include the latest information on supplementary cementitious materials, chemical admixtures, particle packing, and more. Various examples incorporating binary and ternary mixes are provided as well as key mixture proportioning parameters, such as paste-to-void volume factor and cement efficiency factors. ACI PRC-211.1-22 is a convenient one-stop reference that provides novice users with the information needed to perform the outlined procedures.

“As the committee achieved this major milestone, I would like to take the opportunity to thank ACI Committee 211 for their continued support and dedicated efforts in pushing along this initiative. I also would like to express my gratitude to Jerzy Zemajtis from ACI staff, past chairs Tim Folks and Gary Knight, and past secretary Ed McGuire for their continued support,” said Ezgi Wilson, Chair of ACI Committee 211.

The goal of ACI Committee 211 is to provide basic guidelines regarding beginner level mixture proportions that will attain desired performance characteristics. The committee will reconvene at its next meeting on Wednesday, October 26, 2022, at the ACI Concrete Convention in Dallas, TX, USA.

To learn more about ACI and to get involved, visit concrete.org

The American Concrete Institute is a leading global authority for the development, dissemination, and adoption of its consensus-based standards, technical resources, and educational, training, & certification programs. Founded in 1904, ACI is headquartered in Farmington Hills, Michigan, USA, with a regional office in Dubai, UAE, and resource centers in Southern California and Chicago/Midwest. Visit concrete.org for additional information.