Charles K Nmai, FACI, is Head of Engineering at Master Builders Solutions Admixtures US LLC in Cleveland, OH, the leading provider of specialty construction chemicals used in the ready mixed, precast, manufactured concrete products, underground construction, and paving markets. He has been with the company since 1987. Additionally, he has active involcement in technology transfer/standards activities and specification efforts to advance the use of durable and sustainable solutions in the concrete industry worldwide.

He is a member of the ACI Foundation Board of Trustees, the Board of NEU: An ACI Center of Excellence for Carbon Neutral Concrete, and ACI Committees 130, Sustainability of Concrete; 201, Durability of Concrete; 222, Corrosion of Metals in Concrete (Chair, 1999-2005); 363, High-Strength Concrete; and E701, Materials for Concrete Construction (Chair, 1998-2001). Nmai is a member of ACI Subcommittees 130-A, Materials, and130-D, Rating Systems/Sustainability Tools.

Nmai served on the ACI Board of Direction from 2003-2006 and was a Board member of the ACI Foundation Strategic Development Council (SDC). He has also served on several other ACI committees, including the Financial Advisory Committee, Construction Liaison Committee, Educational Activities Committee, and Fellows Nomination Committee

A corrosion inhibitor patent holder, Nmai was honored in 2009 at the Ninth ACI International Conference on Superplasticizers and Other Chemical Admixtures for outstanding and sustained contributions in this field. He was awarded the 2013 ACI Arthur R. Anderson Medal for outstanding contributions to the advancement of knowledge of concrete as a construction material in the areas of corrosion and chemical admixtures.

Michael J. Paul, FACI, has more than 40 years of construction and engineering experience and is a recognized leader in the concrete industry. He currently serves as Principal Structural Engineer for Larsen & Landis, Inc., based in Philadelphia, PA. In this role, he oversees the engineering, documentation, and management of structural engineering for commercial, institutional, industrial, recreational, and residential projects. Paul’s experience includes troubleshooting, repair, restoration, and rehabilitation of existing concrete structures in addition to new structure design.

A Fellow of ACI, Paul’s leadership and volunteer efforts with ACI amass a long list. He presently serves as Trustee of the ACI Foundation, Chair of its Development Committee, Chair of the ACI Membership Committee, and on the ACI Financial Advisory Committee. His previous professional service to ACI, which extends nearly 40 years, includes the Board of Direction, Chair of the International Project Awards Committee and ACI Committee 124, Concrete Aesthetics, for which he continues to edit the “Notable Concrete” series produced for ACI conventions and excerpted in Concrete International.

In addition, he served on the editorial review panel for both Sustainable Concrete Guides of the U.S. Green Concrete Council. He is a member or past member of several other ACI committees including 120, History of Concrete. A frequent speaker and author on concrete topics, Paul has contributed several articles to Concrete International on projects involving the renovation or restoration of historic concrete structures.

In addition to his ACI activities, Paul is an active member of several ASTM International committees and is a past member of the American Society of Civil Engineers (ASCE), having served on the editorial panel of the Journal of Leadership and Management in Engineering, and ASTM International, serving on Committee E06, Performance of Buildings. His contribution to the industry is also evidenced by his 20 years of undergraduate teaching. Paul was the Coordinator for the Senior Design capstone course in the Department of Civil and Environmental Engineering at the University of Delaware, Newark, DE, USA. The course received the National Council of Examiners for Engineering and Surveying (NCEES) Engineering Award Grand Prize in 2010.

Before joining Larsen & Landis, Inc., Paul held engineering positions for Built Form LLC, Duffield Associates, Thornton Tomasetti, Guardian Companies, Gredell & Paul, among others. He has received numerous honors and awards from professional, technical, and community organizations including the 2018 ACI Strategic Advancement Award and 2008 Engineer of the Year from the ASCE Delaware Section.

Paul received his MSCE and MArch from the Massachusetts Institute of Technology, Cambridge, MA, and his BA from Dartmouth College, Hanover, NH, USA. He is a licensed professional engineer, a licensed architect (American Institute of Architects), and is LEED-AP accredited.

Robert C. Lewis, FACI, is the Technical Marketing Manager – Silica Fume, at Ferroglobe, PLC, which is headquartered in Madrid, Spain. He began his career as a field technician in 1978 for Tarmac Topmix in the UK. In his first year, he gained three qualifications with the Institute of Concrete Technology (ICT): Concrete Practice, Concrete Technology, and General Principles. Within 6 years, he progressed to running the regional laboratory and was the assistant to the two area technical managers for the south of England.

Lewis moved to Elkem Materials in 1986 to provide technical support to the international market. During his 32 years at Elkem, he involved himself in many varied projects worldwide—ranging from bridges to tunnels, skyscrapers to nuclear power plants, chemical factories to warehouse floors, and underwater placement—where the projects used high-performance silica fume concrete. He joined Ferroglobe in 2018 as Technical Marketing Manager – Silica Fume, working with the sales teams across the world.

Over the last 40 years, Lewis has written or co-authored numerous papers on silica fume and its use in concrete, most significantly for the ICT Advanced Concrete Technology Diploma course and the fourth and fifth editions of F.M. Lea’s The Chemistry of Cement and Concrete. He is a well-known speaker at seminars and conferences, presenting and passing on his knowledge of silica fume concrete technology. He is the UK expert to the CEN (European Standards) committee for silica fume, contributing to the development of the European Standard EN 13263, Silica Fume for Concrete.

Lewis has served on numerous ACI committees and currently is a member of the Committee on Codes and Standards Advocacy and Outreach, International Certification, Educational Activities, Education Award, International Conferences and Conventions, and the Personal Awards Committee; as well as ACI Committees 211, Proportioning Concrete Mixtures; 234, Silica Fume in Concrete (which he chaired for 7 years); and 552, Cementitious Grouting; and Joint ACI-TMS Committee 216, Fire Resistance and Fire Protection of Structures.

A key achievement of his service with both ACI and ICT has been collaborating on the creation of the ACI-ICT EN Standards Concrete Field Testing Technician certification program, which is running very successfully in the UK, Europe, and areas of the Middle East.

Anton K. Schindler, FACI, is the Mountain Spirit Professor and Director of the Highway Research Center at Auburn University (AU), Auburn, AL, where he has taught courses in engineering mechanics, structural design, and concrete materials in the Civil and Environmental Engineering Department. He has served on the AU faculty since 2002 and his students have selected him twice as the department’s Outstanding Faculty Member.

Schindler was elected a Fellow of ACI and the American Society of Civil Engineers (ASCE) in 2013 and 2019, respectively. He received the 2021 ACI Delmar L. Bloem Distinguished Service Award. He received the 2017 ACI Cedric Willson Lightweight Aggregate Concrete Award and the 2013 Erskine Award from the Expanded Shale, Clay and Slate Institute for his contributions to the use of lightweight aggregate in concrete applications. He was a Fulbright U.S. Scholar from 2015-2016 with the VTT Technical Research Center in Finland to perform research on nuclear concrete structures. Schindler also received the 2006 and 2011 ACI Wason Medal for Materials Research.

Schindler serves as Vice Chair of the ACI Foundation Scholarship Council. He is also a member of the ACI Technical Activities Committee (TAC) and ACI Committees 209, Creep and Shrinkage in Concrete, and S803, Faculty Network. Schindler is the past Chair of ACI Committees 237, Self-Consolidating Concrete; and 231, Properties of Concrete at Early Ages. He serves as the Faculty Advisor for the ACI Auburn University Student Chapter that he helped establish in 2014. In addition, he is Chair of the Transportation Research Board (TRB) Standing Committee AKM50, Advanced Concrete Materials and Characterization. He is a member of both  ASCE and ASTM International. Schindler is also a licensed professional engineer in Alabama.

Matthew R. Sherman, FACI, is a Senior Principal with Simpson Gumpertz & Heger, in Waltham, MA. He specializes in the intersection of construction operations, structural engineering, and construction materials. As a Senior Principal with Simpson Gumpertz & Heger, Sherman leads integrated teams of engineers, chemists, petrographers, and other professionals to solve complex interdisciplinary challenges. His work includes evaluating existing structures, assessing materials, conducting nondestructive testing, and supporting construction teams. He has extensive expertise in assessing and evaluating structural- and material-related issues and a passion for working with specialized structures, such as stadia, ice rinks, and swimming pools.

Sherman gives back to the industry in many ways, including writing and lecturing extensively on concrete construction, assessment, and repair; condition assessments and evaluations; and specialty structure repair. He is a Fellow of ACI, Chair of the ACI Financial Advisory Committee, and also a member of ACI Committees 201, Durability of Concrete; 221, Aggregates; and 349, Concrete Nuclear Structures. He is a Fellow of the International Concrete Repair Institute (ICRI)—where he serves on the Technical Activities, Corrosion, and Evaluation committees—and is also a member of the Concrete Society and American Welding Society.

Lawrence L. Sutter, FACI, is the Associate Dean of Research and External Engagement for the College of Engineering at Michigan Technological University (Michigan Tech), Houghton, MI. He also serves as a Professor in the Materials Science and Engineering Department at Michigan Tech and as Director of the University’s Applied Chemical and Morphological Analysis Laboratory (ACMAL). Sutter is a licensed professional engineer in Michigan.

He has over 40 years of experience in materials characterization and both testing and conducting research on concrete-making materials with a focus on durability. He has conducted research on various recycled and secondary materials including fly ash, slag cement, and municipal solid waste incinerator ash, in addition to conventional construction materials such as aggregates, concrete, and asphalt. Significant projects have included extensive studies of the effects of chloride deicers on concrete pavements and the development of tests for application in fly ash specifications.

He was also a member of the ACI Strategic Development Council (SDC) and past Chair of the SDC Accelerated Technology Implementation Team for Alternative Cementitious Materials. In 2019, he received the ACI-SDC Jean-Claude Roumain Innovation in Concrete Award and the Delmar L. Bloem Distinguished Service Award. He is a past member of the Educational Activities Committee (EAC) and also served as Chair for ITG-10, Alternative Cements, which was instrumental in forming Committee 242. He has also served in the past as an Examiner for ACI Field Technician certification.

Sutter is a Fellow of ASTM International and a member of Committees C01, Cement, and C09, Concrete and Concrete Aggregates, serving on the Executive Committee of C01 and also as incoming Vice Chair of C09. Additionally, he serves as Chair of Subcommittees C01.14, Non-hydraulic Cements; C09.24, Supplementary Cementitious Materials; and C09.65, Petrography. He is a member of ASTM Subcommittees C01.10, Hydraulic Cements for General Concrete Construction; C01.13, Special Cements; C09.27, Slag Cement; C01/09.48, Performance of Cementitious Materials and Admixture Combinations; and C09.50, Aggregate Reactions in Concrete. Sutter received the Award of Merit in 2019, the organization’s highest recognition.

The American Concrete Institute is a leading global authority for the development, dissemination, and adoption of its consensus-based standards, technical resources, and educational, training, & certification programs. Founded in 1904, ACI has its headquarters in Farmington Hills, Michigan, USA, with a regional office in Dubai, UAE, and also a resource center in Southern California. Visit concrete.org for additional information. 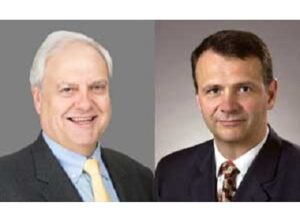