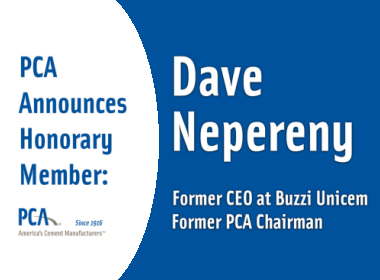 The Portland Cement Association (PCA), representing America’s cement manufacturers, recently announced their newest honorary member, Dave Nepereny. PCA reserves election to honorary membership for those who, in the opinion of the PCA Board of Directors, have rendered outstanding service to the cement industry and the association.

“Dave’s lifelong contributions to the cement industry are something to celebrate. We’re happy to have Dave as an honorary member,” said PCA President and CEO Mike Ireland.

Dave Nepereny was a former Chief Executive Officer at Buzzi Unicem. As a member of the PCA Board of Directors, he served as a former Chairman from 1994-1995.

“Dave was actively involved with multiple aspects of PCA, setting an example as a former Chairman and chair for multiple committees, including the Membership Development, Market Development Council, and the Administrative council,” said PCA Chairman and President of GCC of America, Ron Henley.

In addition to committee and chairmanship work at PCA, Nepereny also served as a board member to former PCA sister organization, CTLGroup.

The Portland Cement Association (PCA) began in 1916. It is the premier policy, research, education, and market intelligence organization serving America’s cement manufacturers. PCA members represent over 90% of U.S. cement production capacity and also has facilities in all 50 states. The association promotes safety, sustainability, and also innovation in all aspects of construction. It also fosters continuous improvement in cement manufacturing and distribution. Additionally, it generally promotes economic growth and sound infrastructure investment. For more information, you can also visit www.cement.org.