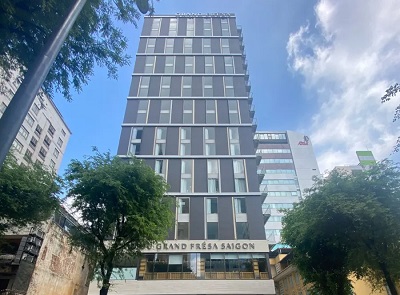 The newest addition to the Sotetsu Hotels Group, an international hospitality chain, the Grand Frésa Hotel in Hồ Chí Minh City is the Group’s first address in Vietnam. The 19-floor building is located in the bustling Bến Nghé ward within the downtown area of Hồ Chí Minh City (District 1). With a 790 m2 ground-floor footprint, resulting in 9,200 m² of total floor space, the Grand Frésa accommodates 120 rooms, in addition to a ground floor restaurant, and amenity areas.

Hồ Chí Minh City features a warm, tropical climate – and a generally high groundwater table – with a wet season that lasts from May to October, and a typhoon season that peaks during the July-November timespan. For Vinata International, the project’s general contractor, the local climate (and the conditions at the construction site) made a reliable waterproofing solution for the below-grade concrete structures a top priority.

“Penetron Vietnam has worked successfully with the Vinata construction team in numerous previous projects,” explains Kim Khanh Ngo Xuan, CEO & Managing Director of Penetron Vietnam. “After reviewing the project specifications, we agreed that Penetron Admix would work best for this new downtown hotel, thanks to the admixture’s ability to help the below-grade concrete structures resist the site’s high hydrostatic pressure and the ease of mixing during batching.”

Penetron Admix was added to the ready-mix concrete by Bach My Group, a Penetron-approved applicator, at the Mekong CC1 batching plant, and used for the structures of two basement floors, and the foundation slab, to counter the hydrostatic pressure from high groundwater levels. Penebar SW waterstop strips were used to seal the construction joints.

Once mixed into the concrete, the active compounds in Penetron Admix react throughout the entire concrete matrix, filling micro-cracks, pores, and capillaries with an insoluble crystalline formation. This prevents water and water-borne chemicals from entering the concrete structures, even under the high hydrostatic pressure generated by groundwater levels prevalent throughout Hồ Chí Minh City.

“An added benefit is the admixture’s ability to automatically self-heal any cracks that may develop during the lifetime of the concrete, resulting in waterproof and durable concrete for the service life of the structure,” adds Kim Khanh Ngo Xuan. “No further maintenance or treatment is required.”

About the Penetron Group

The Penetron Group is a leading manufacturer of specialty construction products for concrete waterproofing, concrete repairs and floor preparation systems. The Group operates through a global network, offering support to the design and construction community through its regional offices, representatives, and distribution channels.