Phys.org reported that the science magazine Rubin published research conducted by engineers at Germany’s Ruhr-Universität Bochum who have developed a shotcrete that can render tunnels, bridges and other structures more resistant against fires and explosions. The new formula enhances concrete with 140 kilograms of steel fibers per cubic meter, a figure that was thought to be impossible for shotcrete.

This is a critical number of fibers, because any more than that and the concrete would be too rigid to be be pumped or sprayed. The researchers used a trick to make the material mroe workable: they doamed up the concrete until it contained 20 percent air bubbles.That allowed the fibers to roll smoothly over the air bubbles, making the material flowing enough to leave a nozzle.

The shotcrete developed at Bochum can be applied to surfaces of any shape. In controlled blast experiments, project partners from the Fraunhofer Association’s Ernst-Mach-Institut in Freiburg demonstrated the capabilities of this protective concrete: It accounts for as much as 60 percent of the residual load capacity of the construction that has to be protected. By comparison, the residual load capacity of unprotected concrete in the same experimental setup reaches a mere 20 percent. 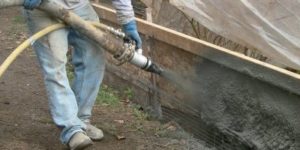 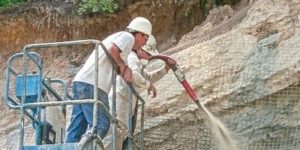 How to use Shotcrete to Create Artificial Rock