An electrical engineer at Missouri University of Science and Technology is using microwave energy to test concrete and rehabilitated aluminum, and in the future her work could lead to safer bridges and aircraft parts.

Kristen Donnell, an assistant professor of electrical and computer engineering at Missouri S&T, studies those materials using an active microwave thermograph (AMT) that highlights flaws that could compromise safety or effectiveness. It works by using microwave energy to heat a defined section of material, which is looked at using infrared thermography imaging. It’s a method of nondestructive testing (NDT) that is fairly undeveloped, Donnell said, but it’s being pioneered at Missouri S&T. 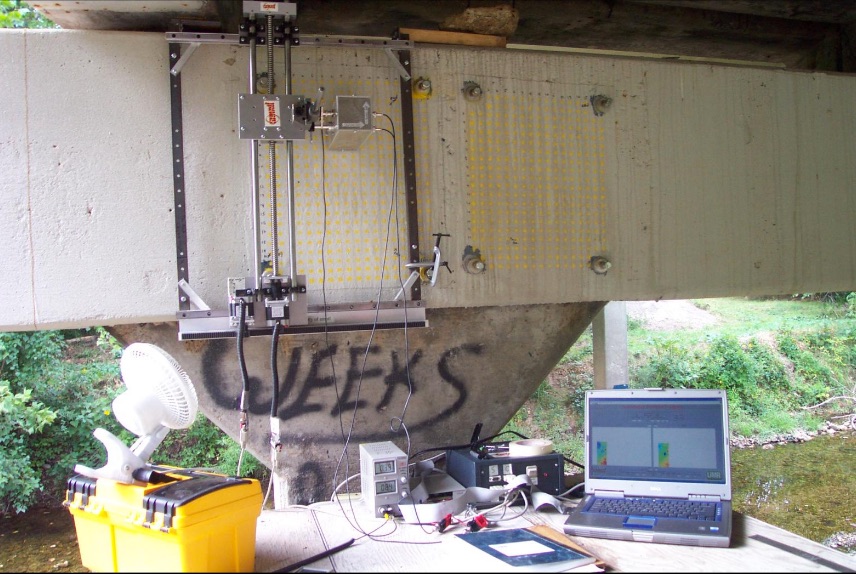 “It’s another tool in the NDT toolbox,” she says.

Donnell, who earned her master of science and Ph.D. degrees in electrical engineering from Missouri S&T in 2003 and 2010, respectively, began working on AMT about two years ago. She uses a 1- to 20-gigahertz high-frequency horn antenna to heat the objects, then view them with an infrared sensor that sends data to a computer.

Because the heat burst lasts only a few seconds, Donnell’s method reduces the risk of heat damage that can happen when using traditional flash heat lamps, and AMT is able to focus the heat at a predetermined depth instead of heating the whole object. For example, when using a flash heat lamp to look at a problem in a wall, the whole wall would need to be heated; in contrast, the AMT method focuses heat on only a small section. It’s not exactly an X-ray, “but it does allow us to look inside the interior of a structure to show defects or problems,” Donnell says.

Using AMT in the lab, Donnell can set the system to focus on the middle of a 4-inch section of concrete. When the images are produced on a computer, they can show if the rebar is compromised (rusted, corroded, broken) or still in good working order. She also can look at the concrete for cracks or other defects that could weaken it.

Donnell also can use AMT to look at materials that are wrapped in carbon fiber. The AMT can check the carbon fiber’s adhesion for areas that aren’t properly bonded. And Donnell can use the method to look at rehabilitated aluminum for weak spots.

The possible uses for AMT testing are many, Donnell says, from checking concrete bridges to aluminum used on aircraft. And it might some day be possible, she says, to use this method to detect cancer. But all of that is in the future.

“It’s probably a good 10 years away from use as an industry method for testing,” she says.

Donnell is a research team member at the Applied Microwave Nondestructive Testing Laboratory (amntl) and a senior member of the Institute of Electrical and Electronics Engineers (IEEE). She is also an at-large administrative committee member of the IEEE Instrumentation and Measurement Society, and she is the distinguished lecturer program chair. Before starting her Ph.D. program, Donnell worked in systems and electrical engineering for Raytheon.