The critical breakthrough in the creation of Rare Earth Labs' chemically reactive concentrated concrete stains came about five years ago as owner Marvin Dodson was working in his backyard in El Dorado, Arkansas.

Dodson had developed an interest in acid stains about a year earlier. He was trying to beautify his front porch. But little had been written about acid stains, and even less appeared to be known. A semi-retired, hazardous waste abatement contractor, consultant and speaker with experience in insulation, sheet metal and heavy construction for over 40 years, Dodson became interested in this great unknown. He approached the staining of concrete from an engineering background, not a scientific background. “I came into this from the back door, with no chemistry,” says Dodson, a high school graduate.

One summer afternoon in 1995, Dodson acquired a mineral rock used on the set of a performance of a Passion play in Hot Springs, Arkansas. He placed it on top of a stone in his backyard waterfall and artscape design. “It was divine intervention,” Dodson recalls. “All of the sudden, I noticed that stain was running out of the stone. I realized that stain was a mineral and it's a rock and that the same thing could work for me.”

He took the mineral rock, hit it with a sledge hammer and anvil to break it down and ran it through a sifter. From there, he formed his first compounds. “I quickly realized that I had to find a better way to do it,” he says, laughing at his early efforts.

A Seemingly Endless Array of Colors
Since that first primitive creation, Dodson has created about 20 compounds for sale through Rare Earth Labs. Unlike his competitors' batch products, Dodson sells concentrates, which provide contractors greater flexibility. A contractor can use as much or as little as he needs by mixing water with the proper amount. He also can establish a variety of ratios, which offer a seemingly endless array of hues.

His color chart shows eight main colors — Ozark gray, etruscan gold, coral moss, mocha stone, jade, sandstone, topaz and red slate. By mixing and matching the ratios of concentrate to water, Rare Earth Labs' color chart shows six gradients of each color for a total of 48 colors. More are possible just by changing the ratios, something any contractor can experiment with, says Dodson.

In addition to being easier to store and handle, Rare Earth Labs' stains are made of about 85 to 90 percent minerals, meaning less acid and greater success in application to either green, old or new concretes. Because more minerals are involved, the appearance and effect is more natural, says Dodson. “Our concentrated stains are really like a parachute, because we try to pack as much as we can into them,” he notes.

Dodson says he prefers to apply his company's stains at lower concentrations to allow the minerals to be transported more cleanly, in successive applications. The appearance is more natural than what happens with higher concentration. “If you want a painted look, get a bucket of paint,” Dodson says.

Rare Earth Labs' stains, as Dodson explains, cause a nearly natural reaction with the calcium carbonate in the concrete to “develop” color. Dodson likens the process to developing film; as time ticks by, the colors become more apparent. Therefore, more applications of lower concentrations create a better result, he says.

Other stains create lots of fizz. Rare Earth Labs' stains create less fizz, which at times leads to calls to the company from contractors asking if something is wrong. Dodson's answer to callers: “Wait a little longer, it'll happen.”

Becoming an Artist the First Time
The stains allow neophyte contractors to create brilliant effects. Dodson says textures are easy to create using textured rollers and mats. For what Dodson calls “a neat effect,” users can apply multiple colors, blending them together by applying a second color next to the first while it's still wet to create a blended appearance. Another method is to hand spray one color, then doing the same to the second. The stains will appear to flow together. For a sharper contrast, Dodson suggests allowing one color to set for about 15 to 20 minutes before applying a second color. Dodson favors using Quick Imprint rollers, especially on brick edges to create a natural flow to the colors.

“You're actually getting closer to a real stone look because of the minerals that we are employing. As a result, you get away from the stark, painted, hard color look and get to an easier, softer, natural feel,” says Dodson.

No matter what affect is sought, Dodson says contractors will find his products easier to use than other acids. Rare Earth Labs offers contractors test kits which include detailed instructions, a color chart, some suggestions for use, and 2 ounce bottles of all eight main color stains. An instructional videotape of application techniques and educational training seminars are planned for later this year, Dodson says.

Application can be done between 18 and 72 hours on green and new concrete, because of their concentration. Dodson has used his company's stains to penetrate right through old sealers and hard trowelled finishes with good results. However, all surfaces require proper preparation. No sanding is needed; but the concrete must be free of waste and debris. “You really need a good, clean surface. That's it,” says Dodson.

Dodson practices what he prepares. The first time he used the stains was on a severely chemically damaged concrete patio area outside a pool deck at a house in Arkansas. The 2,800-square-foot patio and pool deck had four large places where the finish on the concrete had been eaten down to the large aggregate road mesh. Dodson sawcut and ground the concrete to look like laid in stones and created a series of blue and brown hues with his stains. “I saw it recently and it still looks as good as when we did it in '96,” Dodson says.

Another great success was in El Dorado, Arkansas. He created a patterned paver look by utilizing engraving along with his stains on the 100-year-old concrete at Courthouse Square, a four-block area of 6,000 square feet used by people coming and going from the courthouse. The completed project was recently named a top 15 finalist in the Great Main Street Award competition.

New Colors, New Markets
Since selling his first stain in June 1998, Dodson has developed a four-employee company responsible for creating and shipping his products. Shipments have gone all over the United States, as well as to Canada, Europe, Denmark and Australia. Most of the interest for his stains has come from the company's website at www.rareearthlabs.com.

As word spreads, Dodson sees business expanding at his El Dorado base. He pictures between 10 and 20 distributors around the world. He has the capacity to significantly expand production and has already stored several months worth of product ready for shipment as interest grows.

Dodson is guarded about future developments because of their revolutionary and proprietary advances for the industry; fearing competitors' counter-attacks.

He says the company has developed about 200 colors, which Rare Earth Labs will begin to unveil later this year. “A lot of them are very unique, really exciting. And some are crossovers,” he says. New effects using new techniques and a new line of application tools in development at Rare Earth Labs are also planned for the near future, Dodson says.

“What we hope is that when someone uses our products, he can use his creativity and his skills to make each job his own creation, something uniquely his. That's what we offer to contractors.” 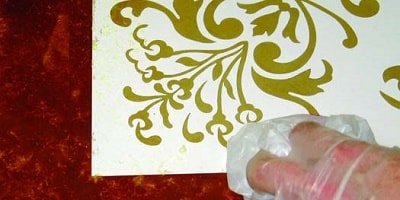 A look at sandblasting, stenciled overlays and the new gelled-acid etching techniques. 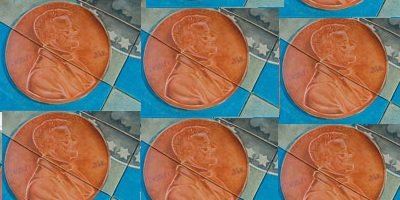 Each layer will soften the contrast between the lights and darks as the metallic surface becomes stronger. This enables the metallic to be clean and crisp without being muddied by other pigments.