Right after the clerk in the orange vest the high-polish concrete floor greets you at Home Depot. Super smooth concrete, buffed to a gloss, seems too nice for a hardware store, much less a warehouse place. Don't be fooled. The near-mirror finish not only looks good and is tough, it also saves money by dramatically cutting the labor and materials needed to clean and maintain it.

Polishing concrete is a relatively new art that is fast finding an audience of willing contractors and many customers. Architects and designers who build high-tech structures, chain stores, auto showrooms, restaurants, and many homeowners have included such floors in their plans. Even the Pentagon ponied up the dough for a spit-shined floor in its boot camp gymnasium at Great Lakes Naval Training Center near Chicago.

Some customers opt for polishing to a high gloss-by removing the top 1/16-inch of the cream. Others have the contractors grind deeper, removing the cream and exposing the aggregate. Some even have special rock, bolts, and pieces of glass added to the mix to be exposed during grinding.

Virtually any structurally sound concrete floor can be polished to a very hard, durable, and nearly maintenance-free finish. While the grinding and polishing add significantly to the cost, these outlays are easily recovered in the years to come from considerably lower maintenance costs.

"Polished concrete can still breathe to let gas and water vapor through," said Bill Kulibert, North American regional sales manager for VIC International. "It resists staining by fluids, oils and certain chemicals, as well as the marks laid down by forklifts and other industrial equipment driving across it."

Kept clean, a polished floor is not slippery. However, when the surface has dirt, dust or water on it, these contaminants can have a ball-bearing effect. If a customer wants an ultrashiny and extremely safe floor, such a surface can be coated with various products that keep it from being slick.

Epoxies and urethane coatings commonly used to protect concrete and give it a high gloss will eventually crack, flake or separate, and have to be removed. Polished concrete suffers from none of these problems. If the gloss ever fades, "only the last few polishing steps are needed to bring it back to a shine," Kulibert said.

Among the downsides are the initial equipment costs. The grinding/polishing machines range upward from $3,000. The disks can range from $12 for a three-inch model to $7,000 for a set of three each of seven grits. Slabs that are not level will suffer from exposed aggregate or areas that are not polished as highly as others. Vertical surfaces can be polished, but the job requires hand-held polishers and the work is very taxing. Cochrane polishes such surfaces by using a grinder that is held to a wall by suction cups.

While estimates of the area that can be polished in a day vary widely, most agree that a well-experienced crew can polish several thousand square feet.

Polishing: Just Like Sanding a Piece of Wood
In an ideal world, a polished floor will be specified by an architect in the original plans. Then the concrete contractor would ensure an appropriate mix is prepared and delivered. Pains would be taken to assure the floor is very flat and extremely smooth.

But construction is not an ideal world and many polishing jobs are on slabs that were poured years, if not decades, ago, and whose flatness and smoothness are questionable. These problems often mean the cost will rise and the job will be longer and harder.

Once the pour has cured anywhere from seven to 30 days, a 40-grit diamond grinder is employed, according to Greg Ferchaud, U.S. sales manager for SASE Company, Inc. "Typically, during the first, most aggressive steps, we recommend using diamond disks with a metal binding. This step takes the longest because it is about 75 percent of the work."

"The initial grinding is the most important," contractor Doug Demmert of Demmert and Associates in Glendale, California, added. "It takes a lot more time than subsequent passes, but taking that time and care is worth it. If you grind too deeply or the floor is uneven, or if you leave some scratches, they will still be there when you finish up at 1,800 grit."

Mile Cochrane of Diamond Tool Products-Canada noted, "The plugs remove up to 4 mils at a time. A disk can remove only 0.6 to 2.4 mils." Virtually all of the diamonds are synthetic.

Then, just like sanding a piece of wood, using progressively higher grades of sandpaper, finer grinding disks are employed. The second and third steps employ metal disks that are 100 and 200 grit, respectively.

Next, Ferchaud said, it is wise to switch to resin or plastic disks. "The concrete has become very smooth and non-aggressive after the 100 and 200 disks which means the metal disks can't be worn away, and thereby keep the diamonds sharp. The diamonds can become ineffective, glazed over." When switching to resin disks, many contractors will return to a grit one grade rougher than the texture on the last metal disk. At this point, they will often spread sodium silicate on the concrete to make it more dense and harden it.

"If you miss one step in the process, you might have to start again," Cochrane said. "Skipping a step means that the next disk is overworked. Polishing will take longer and the next disk will wear more than it should."

Knowing when to switch to the next-finer grit is a bit of an art. Cochrane gauges when to change by looking at the milky gray slurry of water and concrete dust. "If the water is clear, the diamonds are not abrading the floor and you probably don't have the right machine in terms of weight, speed, motor power. Once you have created a slurry and the water becomes clear again, it is time to switch disks."

About the only consistent problem is too-soft concrete. "We polish a lot of floors with different aggregates and have managed to polish most of it," Demmert said.

"Concrete that's 40 or 50 years old can be densified," Kulibert added, "which will chemically reform it to be much harder and denser. Densifying saves the customer the labor and cost of laying a new pad down. Any pad can be polished, but preparing the newly poured one will make it quicker and easier." 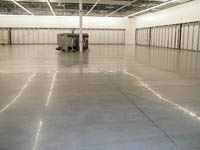 The wet-or-dry question is about the biggest bone of contention amongst contractors, dealers, and manufacturers. Demmert does both. "Metal disks can be used wet or dry. Resin disks have to be done wet. Otherwise, friction will burn them out," he said.

Cochrane insists on wet because concrete dust is carcinogenic (cancer-causing). "By using water as a lubricator, it and the dust become a slurry. The dust is not discharged into the air."

Like so many other tools, diamond disks and plugs last longer when employed properly: on the right kind of concrete and with a little care. 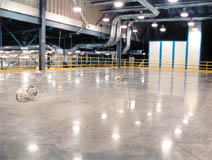 Contractors, distributors and manufacturers generally agree that most disks are good from 5,000 to about 40,000 square feet. Those numbers, of course, can change dramatically based on the hardness and roughness of the concrete, the disk's grit size and binding material, etc.

"Metal bond diamond disks last 10,000 square feet or more," Kulibert said. "And the finer the grit, the longer they last."

Because polishing is such a new service, it is still going through its growing pains. Since each floor is different — age, composition, hardness, intended use — one problem is selecting the right diamond and binding combinations. Some 40 different combinations of diamonds and soft, medium, hard or extremely hard bindings are available.

Hardening: Necessary or Wasted Money?
The polishing process does not harden concrete. Since the hardness and density of each pour varies, different chemicals are used by some contractors to ensure the concrete is sufficiently solid in order to be polished. The most common is sodium silicate.

Failing to use a hardener is a mistake in the eyes of Vernon Talbot, sales director of Advanced Floor Products in Provo, Utah. "Without a hardener, either you put a coating over the concrete or the shine will deteriorate or 'walk off.'"

Hazards
Just like all construction, polishing concrete has its hazards. They include the mundane, the possibility of slipping on a wet floor. If electrical polishers are used, the wiring requirements must be met.

Because concrete dust is carcinogenic, proper precautions must be taken to control the dust and to protect workers from breathing it. Control measures include water systems to control dust and vacuums to remove dust or slurry or both.

Costs
The costs of polishing concrete can range from a few cents per square foot to several dollars for materials, plus the costs of the equipment.

According to Demmert, these costs can be easily recovered because he is able to charge his clients 25 to 50 percent more for a slab that is polished.

However, he said, "the cost of the equipment and the consumables will keep a lot of people out of the business."

Concrete polishing is a new trick that is still being pioneered. If you want to try it out, Cochrane suggests grinding your own garage floor. "You can become competent in one or two jobs, and it really helps if you find someone who will guide you, tell you everything you need to know." 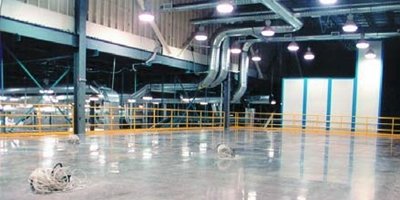 Polished concrete is a lot more than just a shiny floor. Floors that are burnished to a high gloss are considered polished, but of course a lot of work, skill and technique goes into achieving that look. 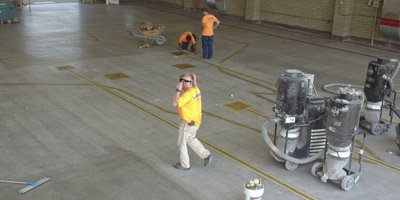 Who would have thought polished concrete would come to the aid of the U.S. Air Force's newest fighter jet?