Coloring concrete is nothing new, according to Mike Miller, decorative concrete installer and founder of The Concretist, of Benicia, Calif. “Contractors have been using stains and integral color with concrete probably since the early 1900s,” he says.

Dyes are a different story – comparatively new to the market and growing in popularity. Dyes took off in the ’90s and demand for them has been increasing ever since. Why? If stains and integral color were good enough for all those years, what’s so special about dyes?

Reaction vs. penetration To put it very simply, dyes penetrate the deepest, while stains react or bond. Dye particles are smaller than colorant particles in either acid stains or water-based stains, so they can get deeper into a concrete surface.

Gary Jones, creative director for Smart Surface Technology Inc., compares dyes to acid stains. Acid stains are developed with heavy metal salts in an acidic solution, he says. They depend upon a chemical reaction with the calcium hydroxide in cement to create color, and they are sealed to protect the color after the reactive solution has been neutralized and rinsed clean.

Dyes are made of much smaller particles than acid stains – about 1,000 times smaller than iron oxide pigment particles, Jones says. They are borne into the concrete by a carrier, either water or solvent. “The color wedges itself between the pores.”

Dye powder mixed with solvent produces a colored solution, says Scott Thome, director of product services with L.M. Scofield Co. Upon application, the colored solvent absorbs into the substrate. When the solvent evaporates, it leaves the powder dye behind. No reaction, and no bond or seal is created either.

What sets dyes apart from water-based stains? Aside from the size of the pigment particle, it’s the binding that makes the difference. “Water-based stains generally have some kind of a binder,” Miller says “Something acts like a resin to bind.”

Water-borne reactive stains contain pigment, silicate, acrylic, co-solvent and water, Thome says. The reaction with the calcium hydroxide is only part of the story. As most of the water evaporates, the co-solvent is allowed to mix with the acrylic. Then, as the solvent evaporates, an acrylic film is developed in the pore structure of the substrate near the surface, locking the pigment in.

There is one exception to the rule that dyes don’t react – “reactive dyes” intended for polished concrete. More on those later.

The advantages
Experts say that, besides depth of penetration, a dye’s biggest advantage is speed of application.

“Dyes are fast,” says Jones. “An acetone-borne dye can be applied to a 2,000-square-foot concrete floor in about half an hour, and it can be sealed about half an hour later. There’s no waiting for the color to be cleaned and dried like there is with acid stains.”

While contractors can buy dyes in powder form, most are delivered as universal concentrates. Miller says there are a variety of choices in regard to what is used to cut the concentrated solutions. “The fastest drying solution is acetone-based, but you can go a little slower with something like alcohol or paint thinner or even slower by mixing the concentrate with water.”

The pace at which the solution dries has an effect on depth of penetration, Miller says. The slower the solution dries, the deeper it penetrates. So, ultimately dry time – and by extension, your choice of carrier – affects the richness of the color. Your carrier choice is also going to be affected by weather conditions. “In hot weather you want to ensure the dye has time to penetrate. In cold weather, you don’t want the solution to freeze.”

Another plus – some dyes are environmentally safe, says Les Davis, president of American Decorative Concrete Supply Co. “Our carriers that are mixed with dyes, including acetone, are exempt from the Environmental Protection Agency’s Volatile Organic Compound (VOC) list or have a very low VOC content. Acetone is highly flammable, and only experienced contractors should apply solvent-based dyes carried by acetone. Water-based dyes are an excellent choice for less experienced applicators or if the job site does not offer good ventilation, fresh produce is present, or odor is a concern.”

Dye disadvantages
Nothing is perfect in the decorative concrete industry, and dyes are no exception.

The biggest disadvantage to dyes is that, so far, no one has developed a way to make them as resistant to ultraviolet (UV) light as stains are. “Some companies make claims about their dye being UV stable, but when you read the product description you learn that it is not really a dye, but a pigment dispersion. Pigment dispersions are typically more topical by nature than penetrating dyes,” says Davis.

“Dye, by its nature, is subject to fading when exposed to UV rays over time,” he continues. “We recommend only interior applications with our dyes. Dye is used in carpet, automotive interior, clothes, and many other products, but they should not be used on exterior concrete.”

However, manufacturers are working toward closing the UV gap between dyes and stains. “We’re constantly working to identify materials that have greater resistance to (UV) light,” says Davis. His company introduced a new reactive dye system for polished concrete at World of Concrete that contains a UV stabilizer. This system is an important advancement for polished concrete because it not only addresses UV resistance, but also moisture resistance.

Chris Sullivan, vice president of sales and marketing for ChemSystems Inc., points out some of the other downsides of dyes. “For one thing, the most commonly used carrier for dyes is acetone, a highly flammable material – if you can’t guarantee good ventilation and the absence of any potential igniters, you can’t use it. Dyes are also very intense and very permanent, which is an aspect that people like about them. But if you spill or drip by mistake, that’s permanent too.”

Dyes can have performance issues with regard to the pH levels of a given slab. The extent of the problem will vary by manufacturer.

Finally, too much moisture in a slab, and dye particles will be drawn into the concrete, gradually getting sucked out of sight and fading the color on the surface.

That’s where reactive dyes come in. With a reactive dye, a chemical agent attached to the dye particle reacts with trusty old calcium hydroxide in cement. The reaction binds the dye in place so nothing can make it migrate. Again, these are marketed to concrete polishers.

Part of the team
In the final analysis, dyes have their limitations, but there is no question they also have their place.

They do a nice job supporting other colorants, says David Tatom, sales and marketing director for Chem-Coat Industries Inc. “Dyes can stand alone in many applications, but they also work very well in conjunction with reactive stains. Sometimes, for instance, a contractor will use a reactive stain and, for any number of reasons, portions of the concrete won’t accept the stain. In a case like that, dye is an excellent solution to filling in the gaps.

“Dyes are also a great choice for things such as logos or very defined artistic work.”

Peter Wagner, an industry veteran who is helping with the introduction of Deco-Pour Inc.’s water-based line of dyes and tints for polished concrete, says dyes have increased in popularity over the past four or five years, and there is good reason for that. “Advances in densifier technology, along with the advent of water-based dyes, has made it possible to use dyes in applications in which they couldn’t previously be used.

“In essence, the newer dyes have eliminated much of the guesswork that has always been part of the reactive stain industry. With dyes, a contractor can be much more consistent with his colors, yet can still offer the variegated look of a stain, in addition to having the option to adjust colors as the base concrete color changes. He can present options to customers with more confidence and consistency.” Miller views dyes as a valuable addition to his inventory. “You can use dyes as a stand-alone product, or mix and match them with stains or integral color. The only limit is your imagination.” 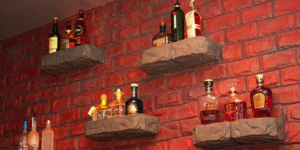 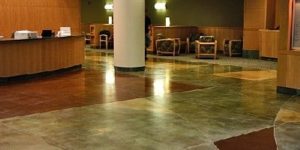 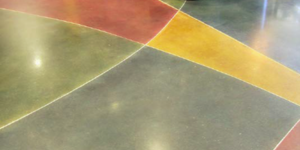