Decorative concrete contractors know having multiple tricks up their sleeves can lead to steadier, more lucrative work. But with so many types of decorative concrete applications out there, from coating to precasting to staining, mastering not just one, but several or all of them is a momentous feat.

Nevertheless, great numbers of contractors, craftspeople and artisans around the world have done exactly that.

How do contractors figure out how to expand their arrays of services offered and which skills to choose to master next? Does being a jack-of-all-trades pay off in the end? And does having certain skills mean learning new ones will be easy?

Here, five veteran contractors and artisans provide insight by explaining where their decorative concrete journeys began, how their skill sets grew and how diversification has affected their careers.

When Gregory Mata first discovered colored, stamped concrete in the mid-’90s, he was hooked. Since then, he’s explored and perfected other facets of decorative concrete, such as overlays, staining and countertops. He says intrigue — not dollar signs — spurred his motivation to learn.

“It was really just all about the material,” Mata says. “The expansion came naturally. It was more of a drive to learn more, get more information and get good quality training.”

However, Mata believes there’s a limit as to how many branches of decorative concrete someone can successfully practice. He says that perfecting multiple skills can be costly and time-consuming. “When I first got information about countertops, I was so enthralled that I almost forgot everything else I was doing. I realized it’s impossible to do everything perfectly.”

He adds it’s important to build relationships with other decorative concrete industry professionals who can be called on if their skill is needed on a project.

Mata says the advantages of offering a diverse list of services are the same as they’d be in any industry — when you know more, you’re more likely to land high-profile work in your field.

“Because of the time that we’ve invested, we can handle very complex projects and stimulate the client to go a little further with concrete products,” he says.

Mike Meredith didn’t plan on working with decorative concrete when he first launched his artificial-rock and waterfall business 20 years ago. But when the recession hit, business slowed. He decided to expand his services to include decorative concrete work such as countertop, kitchen and barbecue installation.

“I had to diversify,” Meredith says. “There is not enough work in one trade alone.”

To develop his decorative concrete skills, Meredith took a course and met with industry veterans. He said learning the new trade posed challenges. For example, he found that while a carving mistake in a jagged rock formation is easy to fix, the slightest goof could ruin a concrete countertop.

But his rockwork background also gave him advantages. “Working with colors and knowing which ones go together helps, and so does knowing how weather conditions affect when you can work,” he says. Meredith’s expansion has helped him build his clientele, but he says it still takes work to get work. “With countertops, it’s all about networking and meeting people,” he says. “You have to work hard on the sales.”

Doug Carlton and his crew bill themselves as experts in three branches of decorative concrete — colored concrete, stamping and staining. They’ve developed skills aside from these core three over the years, but because they were just good at them — not great — Carlton chose not to practice them professionally.

When a project calls for a skill not related to colored concrete, stamping or staining, they bring in an expert from their networking pool of contractors. Carlton says this process has been a smart business move because it leaves his clients with the highest-quality results.

“Each and every facet of decorative concrete must be installed by the best you have available,” Carlton says. “By forming a networking team, it’s easy for us to match the client’s expectations, because every one of us is skilled at what we do.”

Colored concrete installation was the first skill the Carlton Concrete crew mastered. Carlton says his decision to add stamping and staining to his repertoire was business-related.

“We were looking for a way to separate ourselves, and it was the best move we ever made,” he says. Carlton says the skills required for his crew’s three core services cross over with one another in that they each start with a design and follow a similar work process.

“They are all interwoven,” he says. “Each one has to be put into the same machine of educating the client, seeing if decorative concrete is a good fit for them, giving the information to your crew, and ordering the products.”

One secret to Becker Architectural Concrete’s success is its diversely skilled staff. Each member of Chris Becker’s 10-man crew has a specific talent, and together, they complete full-service projects using a spectrum of decorative concrete applications from floor coatings to precast furniture, Becker says.

“We place a high emphasis on design and look at a project knowing we have different tools to work with,” he says. “We’re known for helping our clients create a space.”

Becker began in the staining and traditional stamping branches of decorative concrete, then explored concrete countertops, overlay systems, stamped overlays and microtoppings. (Cold Minnesota weather forced him to focus on indoor applications, he says.) Today, he and his crew offer a range of services and produce high-quality results, which has led to many referrals and a coveted reputation in the industry.

“It’s about being very skilled and successful at all of these things, and for me, it developed over time and took years,” Becker says.

Of course, it’s not just an impressive skill set that leads to success in the decorative concrete industry, Becker says — it’s passion.

“We’re really concrete addicts,” he says. “This material gets you hooked.”

Acid staining was the first skill Zac Coletti perfected as a decorative concrete contractor, and shortly thereafter, he began applying overlays and microtoppings and coloring them with stains and dyes. “It was really a necessity,” Coletti says. “Not all slabs were going to fit the bill to be acid-stained.”
He also learned to install epoxy coatings and polished concrete, as well as a skill that would become his favorite type of work — concrete countertop formation.

While formed concrete is his focus, Coletti offers a range of services, making his business a versatile one-stop shop. “We oftentimes have clients who want us to make their countertops or vanities and are at the same time looking for a polished concrete contractor or someone to acid stain and seal their floor,” he says. “When they find out we do that too, it’s really a no-brainer.”

Coletti says his versatile skill set helps ease the learning curve when he attempts something new. He says many applications, such as polishing concrete countertops and polishing concrete floors, require similar skills. So do fixing spider cracks in a microtopping and applying slurry to a countertop, he adds.

“If I’m trying a new or different technique — something I do all the time — I can always draw from similar applications to get an idea of what’s going to happen,” he says. 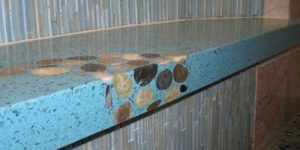 How to Create a Shower Bench out of Concrete 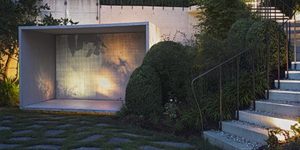 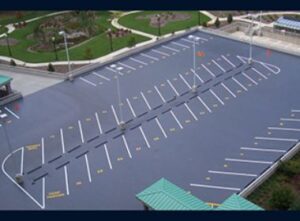