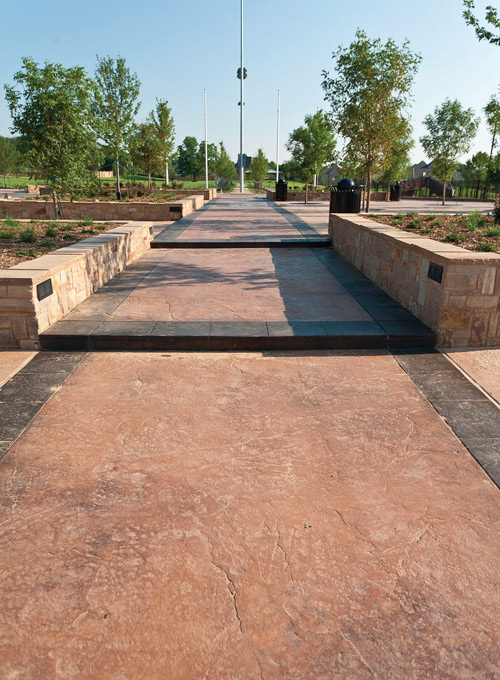 Celebrating its silver anniversary this year, Texas Bomanite has been performing high-end decorative concrete work across much of Texas since 1987. With more than 3,000 jobs under its belt, many of them high-profile, the Dallas-based company has built a reputation of delivering top-quality work.

“We have a few core beliefs that we follow religiously,” says Scott Balch, president and owner of the company. “Simply put, we believe in ourselves, our abilities, and our ingenuity in finding solutions to challenges.”

North Texas Bomanite Inc. was established as a Bomanite franchise in 1987. If you know decorative concrete, you’ve heard of the Bomanite brand. Brad Bowman, who passed away in 2000 at age 90, is credited with inventing the stamped concrete process. In 1970, he patented his process for imprinting and coloring concrete and formed Bomanite Corp., which quickly began franchising contractors.

Balch and a partner left the civil contractor they were working for and bought the North Texas franchise in 1990. Though his partner moved on fairly quickly, Balch has never looked back.

“When we started out, we concentrated primarily on exterior architectural concrete, with a little interior staining,” says Balch. “Over the years we’ve expanded with the industry, adding thin toppings, seeding and exposing decorative aggregates, exposed aggregates, polishing, Grasscrete (Bomanite’s pervious system), and chemical staining and sealing. Now, interior polishing comprises about 50 percent of our business.”

Over the past several years Texas Bomanite has had the opportunity to work on some pretty noteworthy projects in its home base of greater Dallas — Arlington Stadium (where the Texas Rangers baseball team plays), the AT&T Performing Arts Center, the Museum of Nature & Science and NorthPark Center (one of the largest malls in the Southwest). At the Dallas Cowboys Stadium, they did virtually all of the exterior walkways, over half a million square feet of concrete.

“Outside Cowboys Stadium, we installed a decorative seeded aggregate into a matrix of integrally colored concrete with an exposed aggregate finish,” says Balch. “We also constructed some integrally colored broom-finished concrete with decorative cuts. I suppose in terms of high-profile work, that job would be one of our signatures, but in terms of complexity it wasn’t particularly difficult.”

How they ended up with the Cowboys contract is illustrative of how the company’s solution-oriented approach leads to more work.

“Cowboys Stadium started out with just a phone call from the contractor, Manhattan Construction, who was in charge of the entire project,” recalls Balch. “They were struggling with coming up with mock-ups of the seeded, colored concrete that was planned for outside the stadium.”

Balch went out to take a look at the stadium work and recognized an opportunity.

“I made a deal with them,” he says. “We agreed to pour the mock-up for free provided Manhattan would give us the opportunity to bid on the job. The funny thing is, Manhattan was close with their own mock-ups. They had tried about 10 separate pours and they were just missing it. We tweaked their mix design a little and we hit it on the first try.”

The company poured all the concrete between the stadium and the parking areas, more than half a million square feet. The job took about eight months to complete, and the team has estimated that they poured about 20,000 square feet of concrete per day to stay on schedule.

Balch says logo work with microtopping is some of the more complex work Texas Bomanite has done. “We did a map in an elementary school in central Texas in which different ecological regions of the state are shaded in different colors. It also depicts the route of an old trail that was established by European visitors about 300 years ago.”

The Texas map, at Camino Real Elementary School in Niederwald, Texas, is an example of how the company works with owners and architects to help bring their ideas to life, says Central Texas Division vice president Kristy Keith. “The architect contacted us early in the design stages to provide input on materials and finishes. The map was created using 15 colors of Bomanite Micro-Top. A high level of detail was required. The school dedication was held on top of the map in 2008. In addition to the map at the school, we installed their polished and dyed concrete floors.”

This complex project also serves as an example of how a successful company can grow. “That job has led to a lot of other work for the school district,” says Keith. “Since then we’ve done several polishing and coloring jobs for their schools. That’s pretty typical. One job often leads to more jobs.”

Balch is justifiably proud of the work his company does, but he doesn’t necessarily see one type of concrete application or technique as the company’s signature.

“I think what we’re known for more than anything else is that we go the extra mile to understand an entire project, not just our part of a project,” says Balch. “Because we tend to be very solutions-oriented, we’ve developed a strong reputation within the design side of the business. If designers are working in a vacuum, the specs or budget don’t align many times. By getting in on a job early and working with the design team from the start, we can suggest solutions to drawings and specifications issues as well as options when it comes to matching desired end results with budget.”

“We’re a full-service company,” adds Keith. “We do a wide range of work from stamped concrete on Texas Department of Transportation road and bridge projects to special finishes such as the Camino Real Texas map. Our ability to do both has been a plus for our company.” 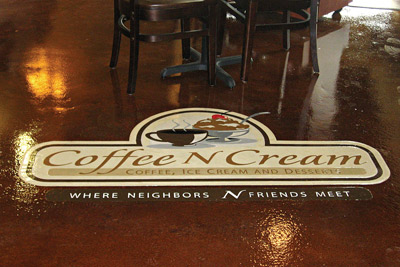 Balch feels fortunate to have grown his company parallel with the meteoric growth of the decorative concrete industry. “Polishing is a great example of how the industry has taken off,” he says. “Over the past 10 years, polishing has really taken hold. Now it is embraced by almost every sector: retail, offices, residential. Part of the reason is that it’s unique when it comes to flooring. There are a lot of green aspects to polished concrete flooring and, when you think about it, it is far easier to restore to its original look, after 10 years or so, than any other type of flooring. Other areas of decorative concrete are growing in much the same way.”