Deborah Taylor’s late husband, Wade, professed his love for her in an unusual, though highly tangible way. Dimes at a time.

He would hold onto dimes that collected on countertops or desktops, and stash them away. Then, once a year on the couple’s anniversary, he’d give Deborah what he’d gathered.

It was Wade’s way of showing his love for Deborah. After all, he reasoned, he loved her so much, he would give his last dime to her.

“She wanted to do something with the porch,” Thorn says in discussing the concept. “Originally it was just going to be colored. But she had seen a pool deck I did, and she decided she was ready for something else.”

Thorn and Mrs. Taylor talked about other ideas, including a cross or perhaps three crosses, in an image evocative of Calvary. And Thorn’s portfolio of work included similar designs.

“I’ve done projects where I create a wood-grain look,” Thorn says. “But she was concerned about people walking on a cross and her reluctance about that.” Thorn and Mrs. Taylor also agreed that a cross perhaps wasn’t the most original concept and maybe didn’t make a uniquely personal statement.

Then she mentioned the idea of doing the likeness of a dime.

“She decided it would be a great honor for her husband,” Thorn recalls.

“To everyone else, it just looks like a dime, but for her it was something personal, and I was proud of that part.” 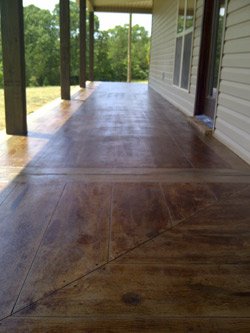 Minting the design
Thorn started work on the project by preparing the surface with a phosphoric acid etch. Phosphoric chemistry was a better choice than a hydrochloric acid, which could adversely affect coloring of the substrate by attacking the mineral content of the concrete, he says.

Then, he and apprentice Skylor Smith neutralized the acid with an ammonia-and-water solution, followed by a 4,000-psi pressure wash with water. After vacuum and blow-dry, the surface was allowed to stand for 24 hours. Then came the coloring.

For a 10-inch border around the perimeter of the concrete porch surface, Thorn cut a grout line and applied a dark-colored acid stain outside of the grout, using a color called Black Walnut from Concrete Resurrection, an Engrave-A-Crete company.

Inside the border, Thorn and Smith applied three stains — a Cola acid stain from Kemiko as a dark-toned undercoat, followed by the simultaneous application of two other stain colors from Concrete Resurrection, Honey Oat and Mountain Road.

With the simultaneous application, Thorn and Smith created a variegated color appearance.

“We wanted to see what it would do,” Thorn says, adding that Mrs. Taylor liked the idea of subtle variation rather than a monolithic look. The colors delivered the neutral, earth-tone appearance she also wanted.

The coloring process was completed with the cleanup of residue using an ammonia solution, buffing and vacuuming.

The dimes are cast
To create two 18-inch-wide dime images on opposite ends of the porch, Thorn used Silver Stencil Spray from Concrete Resurrection and an Engrave-A-Crete Wasp engraving tool, which he calls a “tattoo gun for concrete.”

For the dime pattern, he ordered a customized steel template from Engrave-A-Crete emblazoned with the year 1967, representing the year the Taylors were married.

Thorn applied a light spray coat of the solvent-based silver finish to get the metallic color of the dimes. He then engraved the features using the template. He put his artisan skills to work for much of the engraving, following the stencil design but doing a good deal of the work freehand.

As a final touch, he applied a second coat of the silver finish, using a hand-application technique to render a hammered metal look. 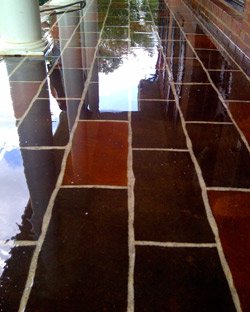 A meaningful memorial
Thorn views the project as a test as much of his conceptualization talent as his craftsmanship skills, citing the collaborative approach with the client and his novel approaches. “I guess you’d say I had to use that creative side of the brain,” he says.

Since her husband’s passing three years ago, Mrs. Taylor speaks without hesitation about her belief in the continued presence of his spirit — in a very literal way. She keeps finding dimes in odd places around the home. In one instance that struck home in a very powerful way, a dime fell from a cross she was hanging on a wall.

Religion and spirituality figured prominently in their long and loving marriage, she says. “I was 15 and he was 20,” she says, reminiscing on their youthful ages at which they began their four decades together. “He preached at a little country church for 20 years. He was a minister in United Church of Christ.”

Both were longtime teachers, focusing on special education.
“We had some hard times, but it was a wonderful marriage. We were definitely soulmates.”

Then, pondering the uniquely personal memorial Thorn had produced, she adds: “When I see the dimes out there, I think good thoughts.”