Brian Oberman, who has been in the concrete industry for 25 years, merged his company with Life Deck Coating Installations about three and a half years ago. Today, as general manager, he’s had the chance to work on projects such as Coasterra, the Beach Terrace Inn and Westroot Tavern.

Coasterra, a “restaurant, lounge and floating event center” that specializes in modern Mexican cuisine, opened for business last summer. Situated on Harbor Island with beautiful views of the bay and San Diego skyline, it’s part of the Cohn Restaurant Group that operates more than 20 eateries in Southern California and Maui.

For this destination dining experience, the long-established restaurateurs wanted a sleek, minimalistic setting that would complement, not compete, with the location’s stunning panoramic view. They also wanted stylish flooring that was long lasting, durable and easy to keep clean. A simple, smooth grind-and-seal concrete finish was selected.

As is the case with most commercial jobs, scheduling was probably the most challenging aspect Oberman says they encountered. Since the crew couldn’t do the job all at once due to logistics, it was segmented into five or six phases and later tied in together. The job was completed in a two-to-three-week span in November 2015.

An upscale shopping center called for new construction of a 2,400-square-foot two-level gastropub called the Westroot Tavern. It features two large patios with fire features, weekly live music, two full-service bars, 30 beer handles and a chef-driven menu. Like most popular requests for projects, the bar owners opted for a grind, stain and seal process. For color, Oberman used Westcoat’s SC-36 Gray Fast Stain, a deep-penetrating dye that dries to the touch in seconds when used with acetone.

To start off, the concrete was initially ground and patched with Westcoat’s TC-29 then colored with SC-36 Fast Stain. It was then sealed with two coats of water-based polyurethane SC-67 in semi-gloss, the same sealer used on the Coasterra job.

From the dining area and bar to the bathrooms, a small crew of two performed this job in segments in a span of two weeks.

“We work around other trades,” says Oberman, with this one in particular very challenging because of a tight schedule. “We always come in at the end and that’s the prime time when it’s the most hectic.”

Located on the cliffs by the beach in Carlsbad, the Beach Terrace Inn is graced with an entryway that literally bubbles over with uniqueness.

The design was requested by the boutique hotel’s manager who was smitten with a similar floor pattern he’d seen during a trip to Arizona. He showed a photo he had taken to the project manager and the Life Deck team was tasked with coming up with a way to replicate the look for the inn’s 400-square-foot entryway.

The extremely challenging project started with removing the existing coating and then prepping the surface with grinders and scarifier to achieve the perfect adhesion profile. Texture-Crete, Westcoat’s textured concrete overlay, was applied next along with Westcoat’s water-based stain in Onyx. The area was then sealed with Westcoat’s SC-70, a very quick-drying acrylic lacquer sealer.

Next, using various sized grinder attachments and following a mapped out custom design, each bubble was created by hand. Similar results could have been obtained with stencils or tape, but they chose that method because “We wanted it to look consistently inconsistent,” says Oberman.

Oberman recounts that it was extremely challenging and tedious for the installers. Creating and coloring each bubble individually by hand ensured the pattern didn’t look uniform. After the grinding process, each one was stained in Ivory to create a strong contrast to the Onyx water-based stain that was first applied. Lastly, the entire surface was sealed again with SC-70. 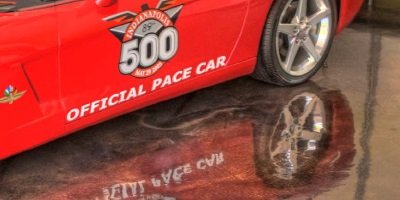 In 2005, race-car driver Dan Wheldon received the first-place title at the Indianapolis 500-Mile Race (also known as the Indy 500) and, along with it, the 2005 Indy 500 Pace Car, a new Corvette convertible.

Dishing Up Decorative Concrete One Restaurant at a Time 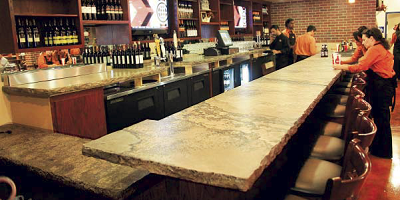 To sample just a few of the flavors of decorative concrete that can be found in the newest restaurants, follow us to Modesto, Calif., San Diego, Calif., Covington, La., and St. Louis, Mo.