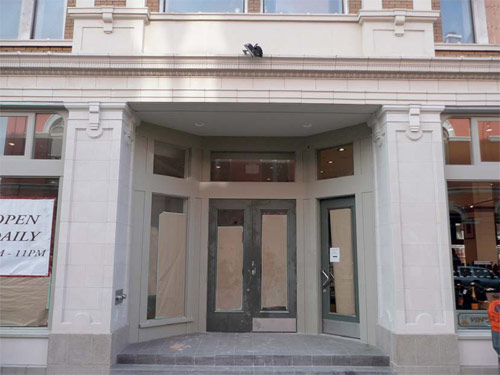 The Hotel Rialto (originally known as the Prince George Hotel and later the Hotel Douglas), built in 1911 in Victoria, B.C., suffered years of exposure to the elements. Efforts at maintenance and rehab often made things worse rather than better.

The Rialto is an excellent representation of the commercial style of architecture common in western Canada during the period leading up to World War I. That, coupled with its downtown Victoria location and the fact that it has remained a hotel as originally intended, made the building an attractive restoration prospect to the City of Victoria’s Heritage Committee. Renovating the Rialto was something of a pilot program for the committee.

“Until the Hotel Rialto, all the Heritage projects involved tax incentives to convert upper floors of commercial buildings to residential use,” explains Steve Barber, senior Heritage planner for the City of Victoria. “The Rialto is unique in that we wanted it to remain a hotel. The upper floors will still be hotel rooms and the first floor will still be retail shops.”

The challenge
Early in the assessment stage, the Heritage Committee determined that the upper four exterior stories of the Rialto, which consist, for the most part, of brick cladding, were in good enough condition to require only cosmetic repairs. The first story was the problem.

The first floor of the building was designed with an open look, achieved with masonry columns faced with terra cotta that make the hotel look as if the upper floors are supported solely by the columns. During previous attempts at renovation and repairs, nearly all the terra cotta was removed. Most of the corners and details were either knocked off or damaged over the years. While terra cotta is a building material that has stood the test of time, replicating and replacing it is an extremely expensive proposition. Alternatives needed to be explored.

A Szolyd solution
Founded in 2006, Szolyd (pronounced “solid”) Development Corp. in Victoria, B.C., has already garnered a reputation for making innovative use of environmentally sustainable materials while creating stunning architectural features. It’s no surprise that the proposed Hotel Rialto restoration, located in their own backyard, was attractive to them.

Nolan Mayrhofer, owner and president of Szolyd, says the Rialto project intrigued him from the start, and he was pretty sure he had an answer to the challenge of finding a material that would realistically mimic the original terra cotta cladding.

Szolyd has used Ductal to create precast architectural features as well as sinks, concrete countertops and furnishings. Ductal, developed by the LaFarge Group and available through Lafarge North America, is a high-strength, flexible, durable and virtually impenetrable alternative to concrete. “It’s an amazing product,” says Mayrhofer. “When I first became aware of Ductal, I had to try it.”

Before the Rialto restoration, Szolyd used Ductal to create ornate architectural features on a fairly small scale. Mayrhofer saw the potential to use it in the Rialto project. “Because it was a restoration, everything was different. We couldn’t use traditional concrete, for instance, because it would be too heavy. Though we had never done a project of this scope, in theory we knew Ductal would work, and we knew we were capable of doing the job.” 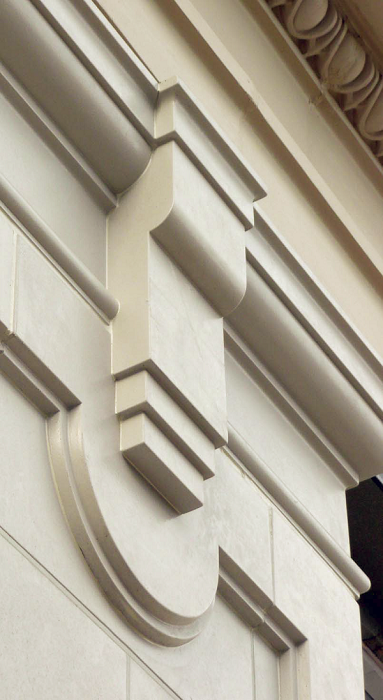 Putting theory to practice
Being awarded the contract was only a small aspect of the challenge, according to Joel Blaicher, lead fabricator for Szolyd. “We had to create a replacement for the original terra cotta as well as the plinths and curbs on the building,” he says. “Fortunately, there was one undamaged original column inside the building. That column, combined with historical research, photos and drawings, served as a kind of template for all the exterior columns and enabled us to create accurate molds.”

Some original terra cotta details on the upper stories gave the team an additional benchmark to work from, Blaicher says. Four large columns are 35 3/8 inches across and 146 1/2 inches tall with a 35 3/8-inch return, while seven small columns are 25 3/8 inches wide. Referencing the data they had collected from their research, Szolyd built wooden composite versions of each column. Once they were convinced they had created accurate depictions of the columns with wood, the next step was to manufacture molds.

The original columns consisted of 4-inch-thick terra cotta over a masonry substructure of stone and brick. “Ductal is strong enough that we were able to cast the new column facing at only an inch thick … and realistically, three quarters of an inch would have been strong enough,” says Mayrhofer.

Because the Ductal columns would be only 25 percent as thick as the original terra cotta, Szolyd had to come up with a means to fasten the new column facing to the existing brick and stone substructure. They decided upon a system by which they attached quarter-inch plates to the back of the columns with half-inch stainless steel bolts embedded in the Ductal. Ultimately, they used 19 fasteners per column. Regarding the fastening system, Blaicher says: “It helped that the building was built very robustly for its day. That enabled us to attach the Ductal facing to the existing substructure with confidence. We worked closely with engineers to achieve acceptable mechanical strength and to meet attachment requirements.”

Two major challenges remained: matching the original color and determining what to use to depict the mortar that was originally used with the terra cotta blocks. “We had to nail the color first and then, because graffiti had been an ongoing issue at street level, we had to come up with a translucent coating that would discourage future graffiti,” Blaicher says. After a good amount of research, experimentation, and trial and error, Szolyd was able to accomplish both goals with an epoxy-like proprietary coating. In fact, the coating they used tended to replicate the original glaze and seems to have richened, or warmed, the subtle impregnated tones in the Ductal. The “mortar joints” were replicated via a flexible construction adhesive, which was also coated with antigraffiti glaze.
The original plinths and curbs were not built with terra cotta. Szolyd created replicas of them with traditional concrete and an exposed fine aggregate.

The final analysis
A satisfied customer, in this case the City of Victoria, tends to be the best barometer of the quality of a project. “Szolyd did an amazing job,” Barber says. “They were thorough, kept us up to date, and were easy to work with.”

Mayrhofer and Blaicher seem to be equally pleased. “We’re pretty proud of what we did,” Mayrhofer says. “As far as we know, no one in the world has ever done this before. There is huge potential here with cladding projects from a restoration standpoint.”

Blaicher echoed those sentiments. “We believe this is the first building of its kind to be restored in quite this way and using these materials.”

Mayrhofer pointed out an added advantage: “By virtue of Ductal’s durability, this renovation should last for generations. When you think of that, and the fact that it enables a contractor to use so much less material, by default it’s a green product.”

Smooth Sailing at the Yacht Hotel with Penetron Waterproofing Treatment