Chances are good that by now you’ve been on a job site with other trades using cordless tools. You may even have a few of your own — and with good reason.

While the concrete industry has a reputation for being slow adopters, not only do cordless tools offer the convenience of not being tethered to a plug, but thanks to continued improvements to battery and charger technology they’re holding their charges longer and putting more power into their motors.

The result: manufacturers are not only developing batteries capable of driving heavier equipment, but most see corded tools as a vanishing breed as they direct more and more of their research-and-development efforts toward everything cordless.

No lightweight
Even a couple of years ago, the perception of cordless tools was they were mainly for lightweight uses. While sales were strengthening, corded tools were still outselling cordless.

That’s no longer the case, and it’s all being driven by the technology that makes more mobility possible — and the convenience of mobility itself.

“Increased mobility is a big advantage,” says Babacar Diop, product manager for batteries and chargers for Brookfield, Wisconsin-based Milwaukee Tool. “It can’t be taken for granted how much that impacts productivity. Mobility has completely transformed what users are able to do on the job site.”

Mike Dougherty, vice president and head of sales for Concrete Arts Inc. in Hudson, Wisconsin, says not only does his company save on everything from the time it takes to unwind and rewind extension cords to not having to buy the cords themselves, but it contributes to increased productivity.

He compares it to a couple of decades ago when a hammer and nails were the most common way of assembling forms.

“I started bringing my drill and started using screws to attach the form work,” he says. “People were reluctant to use it until they saw how much more efficient it was and how much power they had, especially when we were trying to pull forms apart in a timely fashion.”

Dougherty believes the big reluctance to switching to cordless tools has come from concern about the problem of batteries dying at inopportune times and the time it takes to recharge them.

Obviously, part of that problem’s solu­tion is good battery management. Concrete Arts uses all Makita Corp. tools, so the batteries are inter­change­able. However, it goes well beyond that.

“We bought 32 new batteries at the end of last year,” Dougherty says. “Each kit we buy has its own two-post battery charger, and we bought five four-post battery chargers to have in our shop so when the guys get back, they can plug them in each night.”

In addition, each of the company’s 23 trucks has at least two battery chargers.

“The ones we keep at the shop are the regular-pace chargers because they can charge overnight,” he adds. “The ones in the trucks are the quick-chargers. We pay a little extra for them, but they’ll charge a battery in 15-20 minutes.”

Leaps and bounds
Dougherty says it’s still common for his crews to have to change out their battery packs at least once a day, but battery technology is improving by leaps and bounds. Depending on the tool manufacturer and the job, change-outs get fewer and farther between.

“They require a lot of energy, so they’re focused on delivering good power density out of the cells,” he says. “They’re using the same size package but getting more power out of it.”

“The cell manufacturers are learning how to make the cells denser,” Sherrod explains. “They’re able to increase the amount of power out of a cell due to improved lithium-ion reaction within the cell.”

Because different tool manufacturers emphasize different features and sizes with their batteries, it’s difficult to do an apples-to-apples comparison between companies. However, Milwaukee Tool has just introduced its new M18 line of RedLithium High Output batteries that Diop says allows users to replace a large segment of corded tools.

These batteries are also completely compatible backwards and forwards with the company’s M18 Cordless System, which now numbers more than 175 tools.

“What we’ve been able to do with these high-output batteries is not only replace some segments of corded tools but provide the power to replace and surpass the power in 15-amp tools — which are the most-powerful tools you can have on a breaker,” he says.

“Table saws, reciprocating saws, a new circ saw we launched last year — when you pair them with our batteries, you’re able to get more power than the best corded tool can provide.”

At DeWalt, the company’s Flexvolt batteries can be used with power table saws, miter saws and other high-powered tools, including the new Flexvolt 60V Max combination hammer. The batteries are also compatible with DeWalt 20-volt tools.

Cacchiotti adds that Flexvolt is the world’s first battery system that automatically changes voltage when you change tools.

“The tools and batteries are more intelligent and sophisticated than they’ve ever been,” he says. “We’re able to tune them and get them to do things we never would have been able to do with corded tools.”

Power management
It’s that sort of power management that’s behind why batteries can hold a charge longer and recharge faster than ever.

Still, some of that run time depends on how the tool and battery are used. Bosch’s Sherrod observes that using a grinder, for instance, requires signifi­cant and constant runtime, while using a drill driver or table saw is more sporadic.

“With a grinder, you’re not only distributing a lot of power, but it’s constant power, which gives the cells the opportunity to warm up,” he says. “It’s important to make sure your batteries are kept as cool as possible, which is why we have our Coolpack technology to dissipate heat away from the cells so the battery will run longer.”

The other issue with batteries is charging times. While manufacturers design to different standards, Sherrod notes that what used to be the limitation was the battery cell’s ability to accept the charge from a charger, but now the limitation is the charger itself.

That’s the main reason Bosch introduced a new charger that will recharge a single-layer battery to 50 percent charge in about nine minutes, or 80 percent in roughly 26 minutes. And, Milwaukee Tool just launched its own Super Charger which charges batteries up to four times faster than its regular chargers.

The bottom line: “It’s really up to individuals to pick their preference,” says Milwaukee’s Diop. “It’s a matter of per­sonal preference, the tools they’re using and the applications. Then they have to prioritize weight versus run-time.”

However, Diop is quick to note that on many job sites he visits these days, a charger is the most-common thing plugged into an electric service.

Of course, retooling is costly, but DeWalt’s Cacchiotti says in many cases the cost of new bare cordless tools is about the same as corded ones. And, once buyers have a couple of batteries and a charger, individual tools can be bought without those extras.

Perhaps even more worthy of consideration is that over time, at least some of these manufacturers expect to go totally cordless. For the industry overall, tool sales are already close to 90 percent cordless.

That’s not necessarily the case with all these companies. DeWalt, for one, is still seeing growth in its corded tool line, but Cacchiotti says a lot of that is coming from overseas and developing regions of the world, where cordless tools are just now being introduced. DeWalt continues to support its corded line while expanding both its 20V and 60V Max systems, which now encompass some 200 tools.

Diop says he believes there’ll always be a few corded tools sold, but the best opportunities and innovation now involve cordless. Mikwaukee is also applying its cordless technology toward other job-site solutions, such as LED lighting and sprayers.

“Concrete sprayers have always been either manual or something that’s a big investment for users,” says Diop. “Our new concrete sprayer gives users the convenience of treating their concrete with a cordless option, which is great depending on how much area you have to spray.”

Concrete Arts’ Dougherty isn’t necessarily sold on the idea that the job site of the future will be totally cordless. He cites larger demolition hammers as tools that he doubts will be able to get the job done with battery power.

“If they did come out with one, I’d want to see a demonstration before I’d buy one,” Dougherty says. “You never know.” 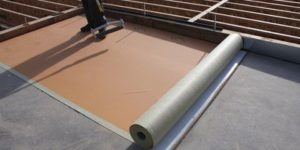 How to Protect Your Concrete Work Surface on the Job Site 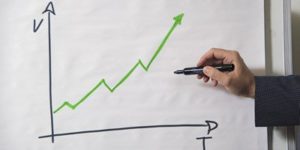 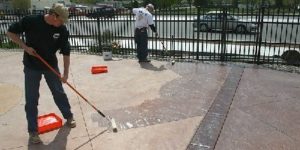 How to Store Partially-used Concrete Sealers