The New York Times recently reported that hemp fibers are being worked into concrete to form a mixture called hempcrete. While no one would want to smoke this stuff, it does seem particularly useful as a building material.

James Savage, a former Wall Street analyst from Stuyvesant, New York, grew disturbed by the news reports of uninhabitable, moldy buildings coming out of New Orleans following Hurricane Katrina and Haiti following the massive earthquake there. Savage used hempcrete as insulation on his first project, his own home.

Hempcrete is made with hemp fibers, lime and water, and while it is not structurally sound, according to this article it does provide natural insulation that is airtight yet breathable and flexible. It is free from toxins, impervious to mold and pests, and virtually fireproof. Hempcrete was developed in the 1980s in France, although it was first used centuries ago. The material is often used in Europe, and in fact some insurers offer discounts on homes insulated with the stuff because it is so fireproof. 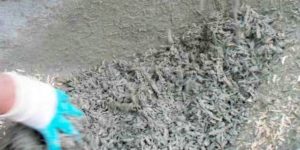