Featuring architectural concrete of utmost quality, three pavilions exquisitely extend the presence of the Kennedy Center for the Performing Arts. Aptly called The Reach, the inviting trio in Washington, D.C., consists of the Welcome, Skylight and River pavilions.

“The buildings are strikingly white,” says Yvonne Nelson, then the formwork manager for Lane Construction, the project’s concrete subcontractor. “There are sunny days when you need sunglasses on to look at them.”

The expansion with its beautiful finish, geometrically graceful curves and demanding high-strength performance has received numerous accolades. Among them is the 2020 Overall Excellence Award from the American Concrete Institute. ACI selected the project because it best united creative techniques with innovative technologies.

On the inside of this sprawling complex, the Reach’s 72,000 square feet delivers open studios, rehearsal, performance and also educational spaces. The three pavilions, situated on a 4.6-acre campus along the Potomac River, are interconnected below grade under a green roof.

The pavilions’ bright-white façades appear smooth from a distance, rising transcendent above the center’s south lawn. However, up close visitors can appreciate a wood-grain finish made from forms lined with tongue-in-groove planks of Douglas fir.

“The exterior walls of each structure feature titanium-white board-formed concrete, sweeping curves and clean crisp lines that complement the existing monument,” Nelson says. Instead of a curing compound, the subcontractors coated the surface with Thompson’s WaterSeal. This is a waterproofing agent typically used on wood floors, she adds.

Getting the mix design right was of primary importance, emphasizes Nelson. The project not only involved complex geometry featuring high-strength performance but also the added requirement of producing exacting finishes. It also had to match color and optimize design formwork pressures for the self-consolidating mix. They tried different iterations of white sand, light-colored aggregate, titanium dioxide and Aalborg White portland cement supplied by Lehigh White Cement Co. before landing on the right combination.

It turned out to be the perfect medium for this project. “Not only could the white concrete be used to create the asymmetrical shapes and various textures envisioned by the architect, but it could also emulate the white color of the marble on the original structure,” Nelson explains.

The white mix was used for all exterior walls, fulfilling both structural and architectural roles. Whereas many of the inside walls were painted, she says, the outer walls featured the white color of the cast-in-place concrete.

In addition to the cast-in-place walls, the  concrete mix with Aalborg White cement was also used as shotcrete. “The project has some challenging conical roofs,” says Nelson. The Welcome and River pavilions both feature conical roofs, along with curved walls and vaulted ceilings.

“We spent many hours figuring out how to place the two layers of concrete in the conical roofs. And we were unsure if shotcrete was going to provide an acceptable finish on this project,” she recalls.

Ultimately, the conical roofs were placed using a combination of formed and shotcrete placement methods with a waterproofing membrane in between the two layers. Using shotcrete enabled them to produce a hand-smooth finish and also follow the roof’s curvature to form a consistent shape. In addition, the color was perfect.

The Skylight Pavilion, Nelson acknowledges, is the project’s crowning achievement with a 145-foot-long, 42-foot-tall “curling” wall on one side. Peri Formwork Systems Inc. produced much of The Reach’s formwork, including a specialized 3-D form for the wall and several tried-and-tested systems. Peri used a CNC machine in Germany to cut the gussets for the single-use formwork. The unique formwork sections were then fabricated in the U.S. and shipped to the site.

The Skylight’s feature wall was formed in three 145-foot-long by 14-foot-tall lifts with placement made from the top. The project team originally contemplated pumping the concrete from the bottom of the forms. However, following several mockups and concrete pressure trials, the team determined that top placement would produce the desired finish. This method would also reduce the overall cost and minimize the design pressure requirements of the formwork system.

A slotted roof atop the curved wall lets in natural light and creates an elegant gathering space. On the backside, audiences can watch live or recorded video of performances projected outdoors for all to see for free.

Nelson reveals her favorite aspect of The Reach is the “crinkle” concrete lining the walls of both the rehearsal and performance spaces. Guaranteeing excellent sound quality indoors, 11,570 square feet of the 3-inch-deep profile diffuses sound, breaks up sound waves and also mitigates echoes with its random folds. The bottom line is that multiple events can take place simultaneously, each with excellent acoustics without disturbing the other.

Steven Holl, The Reach’s architect, came up with crinkle concrete’s unique form pattern by bending sheets of metal. Subsequently, he worked with Fitzgerald Formliners and Form Services Inc. to transfer the irregular pleated textures to elastomeric form liners. The 4-by-10-foot formliners were then placed in a staggered bond pattern. Together with Aluma Systems’ beam gang system, they formed the 22-foot-tall cast-in-place walls of the interior performance spaces.

Overall, the crinkle concrete walls offer several benefits. First off, they are both decorative and sound enhancing. They also serve as primary structure supports for the portion of the buildings where they reside. The brilliant use of both texture and light combines to create a warm and inviting atmosphere to this monumental project. 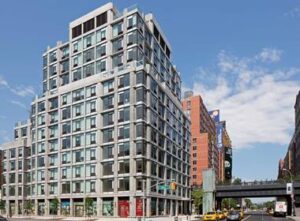 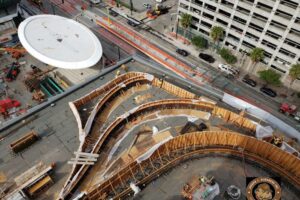 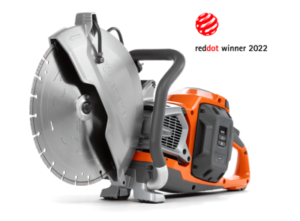