Analysts have been dissecting the residential and commercial construction industry for months, and though some predict a rebound soon, no clear end to the rollercoaster ride is in sight. But as many in the decorative concrete sector have discovered, a change in the market doesn’t necessarily mean a dramatic decline in business. Many have experienced loss, but for some manufacturers and contractors, this has meant only a slight shift in sales or a marginal decrease in bids. More than anything else, it has been a learning experience. It has been a time of reflection, a time to rethink business strategies and reshape companies, not only to survive the downturn but ultimately come out on top.

When the market does actually rebound, Jim Niehoff, director of the Portland Cement Association’s Residential Programs, suspects the decorative concrete industry will be more successful than ever before. During his 11-year tenure with the PCA, Niehoff has witnessed great growth, particularly in the commercial and high-end markets. Although he says the housing downturn has had an effect on the decorative concrete industry — as it has every segment of the new-construction residential market — it hasn’t made a significant impact on demand, because of decorative concrete’s frequent use in custom and high-end projects.

“Relatively speaking, I suspect that decorative contractors have been affected less than many of their traditional flatwork counterparts,” Niehoff says. “Our perspective from attending trade shows and receiving inquiries on our Web site is that consumer interest in decorative concrete hasn’t declined at all. This is an industry that has shown extraordinary growth in recent years, and I think decorative concrete will be very well positioned to capture market share in the future.”

Brickform’s Harry Freis echoes Niehoff, suggesting that while the industry has been affected, there are pockets of strength, particularly in public projects and high-end residential work. “It is difficult to separate seasonality from overall business trends, which include competitive pressures and geography as well as the economy. The days of 30-percent compounded growth in our business will probably not be seen again for a while, but we should continue to enjoy healthy sales. Of more concern is continued inflation on the expense side — energy and materials — which is a serious squeeze on profitability.

“I am also optimistic that the redecoration market will open up quickly as mortgage credit becomes more available. Buyer caution, however, will put a damper on business as usual.”

This buyer caution, suggests MAPEI product manager Todd Miller, is a result of a general tightening of the economy, and there is only an indirect correlation between the housing slump and the concrete industry. Location is yet another driving force behind the success or failure of the trade, adds Miller. “In some regions it doesn’t appear the economy has slowed down at all, while in other regions — e.g., Florida and Southern California — there has clearly been a downturn. However, when it comes to restoration work, we (at MAPEI) are almost entirely focused on the commercial market. To date, this market is perhaps just a little shy, but there remains plenty of activity, and we are experiencing very positive growth.”

Manufacturers catering to the commercial market may be staying alive, but some contractors — even those who have residential and commercial clients — are singing a slightly different tune. Michael Miller, principal of The Concretist in Benicia, Calif., has experienced the reality of an unstable market for the first time since starting his decorative or “sensory” concrete business 18 years ago. Before the 2007 holiday season, Miller and his team had a steady flow of residential and commercial jobs based solely on referrals, with little to no money or time spent on advertising or proactive marketing. By Thanksgiving, that had all changed.

Miller used the slowdown as a way to develop better relationships with clients. “I still don’t advertise, but I have tried to make it a point to take time with the homeowner, designer or contractor to explain everything we do, because many of them don’t always know about all of our services,” he explains. By building on existing business partnerships, The Concretist has kept afloat while gaining better business practices along the way. “We went from being dead between Thanksgiving and Christmas, and being really concerned, to being comfortable again. For me, all it takes is a simple thing. Make that extra effort to say, ‘By the way, this is what we do. You seem to like it, so take a look at what else we do and know about it for the future.’ We have missed out on previous jobs because we never took the time to fill our clients in on the entire range of what we do. It’s not like it costs a lot or takes a lot of time. It just takes a little discipline to do it.”

Contractors aren’t just battling the market — they’re battling competition, notes Bev Garnant, executive director for the American Society of Concrete Contractors. To compete, particularly in an unpredictable economy, one must be skilled and business-savvy. Over the last 10 years, more and more contractors have entered the market, making it harder to stand out in a crowd. “Good contractors develop relationships with designers and owners, deliver a high-quality product, and offer a high level of customer service,” she says. “When you have the total package, you have a better chance. I’m not a prophet, but the better contractors will hold on and do fine. We will lose contractors who are not as well-trained, and the better contractors will rise to the top and get the work that’s there.”

One mistake a lot of businesses make when the market is down, Garnant notes, is to cut things such as marketing budgets and customer service becasue they see them as frills. “That’s when you need to be promoting the most,” she says. “You want to be seen so customers know that you’re out there.”

Garnant suggests exploring diversification without losing control of the business. One possibility is the pervious concrete market, which she says is becoming more popular and could be a good choice for a mid-sized contractor.

Regardless of the approach, she cautions: “If your head’s underwater, it’s too late. You have to consistently do things right. If you’re treading water now and somehow you pull through, you need to do prevent this from happening again. Ask yourself, ‘What can we learn from this down market and from those who didn’t succeed?’ This isn’t just in the construction industry. This is basic Business 101.”

Water Brothers Construction Inc. of Eugene, Ore., is no stranger to Business 101. Husband-and-wife team Ken Froebig and Susanne Weiss, who began the company in 1996, attended a small business management class for three years, time Weiss considers well spent. “We recommend the class to anyone who wants to start a business. It’s like a support group.”

While they learned many tactics from the class and their mentor, Weiss says she and her husband also practice many principles he carries with him from previous experiences, including surviving a downturn in 2003. One of the most significant, she says, is to build a positive image for your company. This includes paying your employees on time and offering them health insurance. Their philosophy has paid off, and the couple has kept more than half their team on the payroll for 10 years. Weiss stresses that this is more significant than paying for print ads.

Despite these sound practices, Water Brothers hasn’t necessarily coasted through the downturn. Jobs are down and people have held out or canceled, particularly at the end of 2007. But Weiss notes things are looking up. During times like these, she says it’s important to remain flexible. “We learned a lot in 2003. Be in touch with the market. Attend home shows. That’s how we keep track of the market. Keep track of every phone call. Find out how people hear of us. And stay flexible. Survival is not to be afraid to go into new territory.” 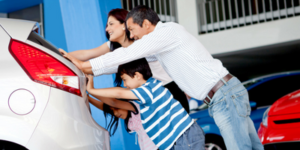 Don’t Get Pushed Around by Clients – Get Paid 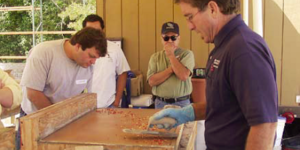 Pros and Cons of Specializing in Decorative Concrete