For those who don’t work with concrete on a daily basis, there’s an impression of it being either an ancient medium, as in the Pantheon and other Roman ruins made out of concrete or a modern industrial building material that gets covered up somehow. We know that’s not true! Concrete is also increasingly being used as an art medium. One exhibit currently on display in the Perez Art Museum in Miami, Florida, uses concrete circles that were cast in a swimming pool.

Artist Nicolas Lobo, who was born in 1979 and grew up in Miami, saw a side of the city that was crumbling tract homes and ethnic workers who had little choice but to serve the rich tourists and part-time residents from colder northern climates. His latest exhibit, called “Leisure Pit,” opened on April 16 and will be displayed through December 13. “Leisure Pit” consists of large concrete sculptures cast within a swimming pool and displayed within a concrete room. He has said in interviews that the concrete-on-concrete aesthetic was originally inspired by what Lobo saw as Miami’s ruined landscape—how this area that was historically swampland has been transformed into a land of swimming pools for rich people.

He cast the concrete circles in swimming pools to help make that statement. The difficult process of casting underwater is meant to highlight the environmental strains of private leisure activities on public infrastructure and ecosystems.

The concrete rings were based on a design for storm drains and have different things embedded in the outer ring, such as the Versace logo and a Medusa head. The circles were linked together to form the complete sculpture, with flip-flop shoes placed around it to make a further statement about leisure and service. “I was really interested in displaying concrete work in a concrete room,” Lobo says, “so we kind of pushed it from there.”

In this interview, with Interview magazine, Lobo describes experimenting with the casting process and mixing together a pound of aluminum powder, 8 pounds of concrete and concentrated pool water, resulting in a big metallic explosion! 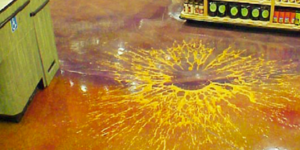 Bubbles, Balloons and Broken Glass: Concrete Ideas from Outside the Box