Troy Oliver graduated from the Concrete Industry Management program at Middle Tennessee State University in 2012, and was able to help pay for his degree by selling his extensive collection of vinyl records and other music memorabilia. Vinyl records became an important part of his senior project and are now the basis of his start-up business.

Because of Oliver’s early interest in skateboarding, he wanted to get a CIM degree to help him get a job designing and building skateboard parks. Oliver lives in Nashville, where 60 percent of the world’s vinyl records are made. When his senior project involved either creating a fictitious business or conducting research, he chose research.

“I had to do something with the concrete and I didn’t know what to do,” he says. “I passed a record plant here in town and asked them if they had scrap. They said yeah so I took some. I took 23 percent sand out of a mortar mix and put in 23 percent vinyl records. That’s how that all started.”

Oliver settled on the 23 percent number based on the three day’s time it took to sit in front of the mortar mixer to get the amounts required to make the sand replacement from crushing the vinyl scrap. After he tested his mix and submitted his paper, his research adviser told him his work was publishable and that he was onto something he should stick with. 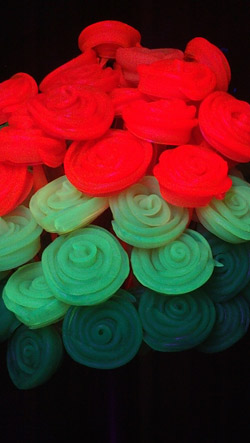 The finished strength of his “record-breaking” mix was very comparable to that of the control (full-sand) mortar mix. The control on a 28-day compressive strength results was 10,099.17 PSI and the 23 percent replacement came in at 9,954.67 PSI. After deciding to create an actual business selling vinyl aggregate, Oliver collected more scrap, which can range from basic black, clear and blue to green, orange, neon and even glow-in-the-dark.

He invested in a granulating machine, which allows him to process the aggregate more quickly and efficiently. This method turned out to be much more effective than a chute rigged onto a lawnmower blade, which is what he was doing to get started!; 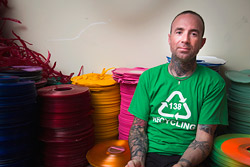 Oliver calls his aggregate line Music City Aggregate, and his business name is 138 Recycling, named after a song by one of the punk bands he used to collect and also George Lucas’ first cult-classic move “THX 1138.” He’s starting small, selling bags of aggregate and concrete coasters and skateboard decks made from his vinyl-enhanced mix.

“The aggregate is available in whatever colors I’ve got on hand, because I’m restricted to what happens at the plant and whatever color might be getting pressed that day,” he says. “But, there’s a lot to choose from. I have glow-in-the-dark vinyl and three different colors of neon that will glow with a black light.”

Oliver has twisted some of the vinyl scraps into the shape of roses which he is selling in bouquets shipped for $50 per dozen (glow-in-the-dark is $75 per dozen). Concrete coasters made with Music City Aggregate are $30 for four, and he’s already received orders from different organizations for dozens of coasters for events. Uses for the aggregate are unlimited. Whatever it is, it’s sure to sound as good as it looks. 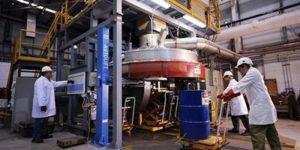 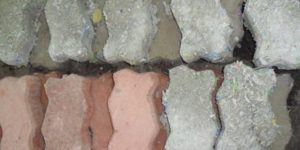 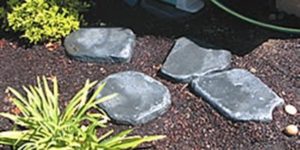