To simply call the Mission Inn Hotel & Spa in Riverside, California, “historic” doesn’t truly do it justice. Originally an adobe boarding house dating to 1876, much of the structure encompasses a city block. It includes wings added between 1903 and 1931.

Built in the Spanish Mission style, the inn has welcomed a host of presidents and celebrities over the years. For instance, Richard and Pat Nixon married there, and Ronald and Nancy Reagan spent their wedding night at the inn. A National Historic Landmark, it has 238 rooms and suites, with no two alike.

In recent years, keeping the aging beauty in tip-top shape has fallen to TFR Builders Inc. The San Clemente, California-based contractor is fairly new to the commercial and hospitality renovation and remodeling scene. However, before CEO and president Todd Rogers founded TFR some five years ago, he spent decades as a senior project manager for some of the largest developers in the state.

Now Mission Inn’s general contractor for going on five years, Rogers says they began their relationship with room renovations. “Then, we did the areas around the spa,” he says. “In this last round, we ended up doing the floor in one of the smaller bars, so they had us do another bar. Then, they asked us to do the main kitchen.”

Just about everyone acknowledges that COVID-19 has had a positive side — as hard as it is to find sometimes. With indoor dining prohibited off-and-on for much of 2020 in the hardest-hit areas of California, the pandemic provided an ideal opportunity to repair approximately 3,000 square feet of continually used floor.

In fact, Paul Anderson, TFR’s staff architect — and a man with a background in renovating hospitality-related spaces — calls it “perfect.”

“It’s hard to repair the vehicle when it’s driving down the freeway,” Anderson says. “This gave us the chance to go in, take our time and really redo that floor.”

Scott Kummer, the technical sales manager for Los Angeles-based Green Chemistry Innovations, believes it had been more than 20 years since anyone evaluated and recoated the floor. “We’re talking about a cementitious-style urethane floor that had seen major abuse,” Kummer says.

“It had really been abused and patched to keep things running,” agrees Anderson. “This is the main kitchen for multiple food service outlets here at the hotel. So not only does it get a lot of use, but a lot of rigorous cleaning as well. All that tension tends to take its toll.”

The floor needed a serious recoating, he says. Consequently, Kummer’s business ended up providing its GSPEC epoxy-urethane coating with quartz for the job.

Anderson says the decision to use the GSPEC product wasn’t difficult at all. Licensed to install GSPEC, TFR Builders has used its products on other, smaller jobs.

“We felt this was a perfect fit in terms of what the hotel needed relative to long-term durability,” Anderson says. “It provides the ability to withstand abuse for another 20 years.”

Kummer believes it’s not just GSPEC’s durability that makes it so attractive, though. Because it has ultra-low VOCs and no isocyanates, it’s safer for both the installers and those working around the job.

“Being an epoxy-urethane hybrid, you’ve got a little more strength with the epoxy. But (the product) still exhibits the same flexibility as a urethane,” Kummer explains. “You have the ability to bridge microfractures, but you have greater scratch resistance than with a standard epoxy.”

In short, he says, the GSPEC system provides the greatest protection against open flames, hot grease and heavy foot traffic. The flooring system also tolerates the thermal impact of cleaning the floor daily with hot water.

Due to the years of wear and hot grease, prepping the floor was an especially important step in the process. A dedicated four-person TFR crew — under the supervision and with advice from Kummer — prepared the floor and installed the system.

“The unknown was just how strong that pre-existing floor was,” Kummer says. “We really couldn’t get in there with heavy grinding equipment. So, we brought in a 4,000-psi power washer with 220-degree water to clean and degrease the area.”

Then, to cut down on the amount of dust generated, the crew power-sanded the floor while keeping it wet. From there, they lightly washed it with a mild degreaser to eliminate any remaining slurry from the sanding.

After a thorough cleaning, the application began. The crew first applied a 1/8-inch GSPEC slurry coat. Next they broadcast Clifford W. Estes Co.’s Permacolor Quartz in red to the point of refusal.

Once that cured, the application team came back with a flood coat of the GSPEC resin. They followed this again by broadcasting the quartz to refusal. Finally, they finished the job with a topcoat of GSPEC clear resin.

Kummer explains they used a notch trowel squeegee to apply the first coat to guarantee the proper application thickness. They then applied the flood coat and resin topcoat with regular flat squeegees and back-rolled.

Along with the floor’s age and condition, everyone agrees the hardest part was working around the kitchen equipment. It was simply too big to be moved.

“We’d try to get under them as much as we could,” says TFR’s Rogers. “Other than that, it wasn’t that bad.”

“We did a lot of that work on hands-and-knees using tiny rollers and brushes,” Kummer says. “We’re talking monotonous and slow moving. It really tested my patience.”

In all, the job took about 10 days at the end of May into early June. This was also a high point for COVID infections in Southern California.

“There were a few people working, but companies were unsure of what to do or how to do it,” says Kummer. “We used every precautionary measure we knew to protect the TFR staff and the people who work at the hotel. I think the people at the Mission Inn had a lot of faith in TFR to let them come in.”

However, Anderson says the company treated the job much like it does its other projects.

“We approached it as if the room next door was full of diners and the rooms above were full of guests,” he says. “Other than the ability to create a little more noise than normal, we kept the kitchen hermetically sealed. And we kept the dust way down.”

The challenge: The Mission Inn is a National Historic Landmark and the floor hadn’t been worked on in more than 20 years. 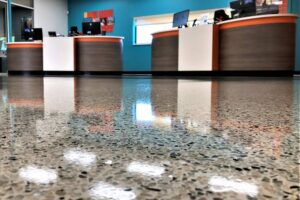 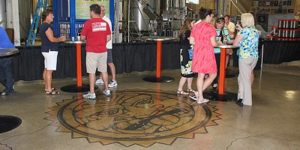