When Wynn Las Vegas opened its doors in April 2005, the $2.7 billion resort was the most expensive hotel and casino in the world. No expense was spared building the 52-story megaresort, erected on land where the legendary Desert Inn once stood. The Wynn boasts 2,716 guest rooms, a 110,000-square-foot casino, entertainment venues, restaurants, a shopping esplanade, and an 18-hole golf course designed by Tom Fazio.

Complementing all the glitter and glam are concrete creations that make heads turn. A mountain 144 feet tall peaks above the resort’s sprawling 192 acres. Seven waterfalls and five lakes holding 2 million gallons of water have also helped transform this desert land into a modern-day oasis.

Installing a mountain
The mountain was built by Rock & Waterscape International using a relatively new system of Mechanically Stabilized Earth retaining walls, explains Fred Lokken, the project’s general superintendent.
“The whole mountain is made of stacked-up nylon baskets filled with small chunks of rock 1 1/2 to 5 inches in diameter,” explains Lokken, who had been with Rock & Waterscape for 22 years before accepting a position with his current employer, RDC Recreation Development Co.
Building the mountain, the falls and the lakes took a full year with a crew of 25 men. “The job called for 50 people,” Lokken remembers. “But I did it with 25 who knew what they were doing. I can’t say enough about all my guys. You can’t do this quality of work without great people.”

Facts about the falls
The waterfall that attracts the most visitors — one of two visible from The Strip and a popular place to pose for photos — is the 52-foot-high cascading Sugar and Ice Falls, says Dave Russell, front features systems manager for Wynn Las Vegas. As the water comes down, it’s separated into two streams by planters with trees. It then rejoins in a basin, drops again and ends up in a lake.

Next to Sugar and Ice Falls is the 62-foot straight-dropping Angel Falls. More than a dozen underwater white lights tucked into niches illuminate the falls from behind and at the base for dramatic effect. “Each of the falls is equipped with underwater lights that light up the stones at night,” Russell says.

Behind these two highly visible falls lies Retail Falls, a smallish creation only 13 feet tall that can be seen from inside the Wynn home store in the Retail Esplanade, as well as from the Sugar and Ice patio.

The largest cascading falls, with four drops, is near the resort’s nightclub. Tryst Falls, which towers at 97 feet, can also be viewed from the Okada Restaurant and Okada Lake.

Inside the Japanese restaurant is Okada Falls. The 35-foot-high waterfall empties into a pond full of colorful koi. Visitors may dine on a patio next to the falls to enjoy it close up or view it from the nightclub below.

Next, there’s the Lake of Dreams Waterfall that descends into the expansive theatrical lake. Standing 45 feet tall and 90 feet wide, the rock creation behind this waterfall is made of individual pieces of limestone block imported from Turkey. The white stones, which Lokken estimates are about 1 1/2 inches wide and a foot long, create a wall “like a big screen,” he says. “They’re stacked together to make a sheer face for the waterfall. When the water runs down, it creates a rippling effect like white water.”

The stacked rock make an interesting backdrop for a waterfall during the day, Russell says, and at night it becomes a projection surface for multimedia shows that run every half hour from 8:30 p.m. until 2 a.m.

In addition to these six waterfalls, there’s a seventh waterfall near the 18th hole at the golf course, which gives a whole new meaning to the term “watering hole.” These falls are 37 feet tall and approximately 50 feet wide.

Carved in stone
Lokken, a Wisconsin native who moved to Las Vegas from Florida in 1988, is no stranger to rock work on the Strip. He’s had his hand in everything from The Mirage’s volcano and Treasure Island’s skull carving to the jungle and coral reef at Mandalay Bay and the lion habitat at MGM Grand. The stonework at Bellagio was done on his watch, as were the statues and buildings of New York, New York Hotel and Casino. The list goes on and on. “I’ve got my name all over the most famous strip in the world,” he says with obvious pride.

In addition to Las Vegas, he’s worked on projects in places from Orlando and Nashville to Hawaii and Guam.

“Steve Wynn’s vision to build a volcano in the middle of the desert kicked everything off,” Lokken says of the extensive rock work done in Las Vegas in recent years. “And if the end result doesn’t match his vision, you rip it up and do it all over again.”

Such was the case of Sugar and Ice Falls, he recalls. “I had to build off a model which supersedes any drawing. When the crew was pouring the slab I didn’t see the proper opening and told my men that it didn’t look right. They argued it was close enough, but I told them if it didn’t look like the model we had to change it. We had to move quite a few walls to get that one right. At least we made the changes before the falls were completed, and we didn’t have to do it all over again.”

Angel Falls, which Lokken describes as “ungodly high with a straight drop,” was pretty difficult to create, especially considering all the shotcrete that went into that waterfall. “That was a monstrous job,” he says. “I can’t say enough good things about the shotcrete crew having to drag those heavy hoses around.”

Lokken explains that the entire MSE wall is a minimum of 8 inches thick. “Most walls on the mountain are 14 to 18 inches thick so it’s like real rock. There’s a lot of concrete on that baby,” he says. You won’t find a hollow rock at Wynn. They’re all filled with shotcrete.

Under Lokken’s supervision, the crew first covered the whole mountain (made out of those baskets of rock) with 8 inches of concrete. Then they epoxied in the rebar, added and shaped chicken wire and shot the structure with another 2 to 2 1/2 inches to fill in the void behind the metal. Next, they applied a structure coat of another 4 to 6 inches, encasing all the steel with concrete. Finally, they shot another 3 to 6 inches for texture, giving them plenty of concrete to carve so the structures could have substantially deep cracks.

The falls were constructed in a like manner. “The waterfalls really take the desert out of Vegas,” says Scott Lokken, Fred’s son, who was in charge of painting the waterfalls during construction and is now engineering paint shop manager for Wynn Las Vegas. “It’s added a whole new dimension to this town. With the lush pine trees and the roar of the huge cascading waterfalls, you lose the idea you are in Las Vegas. Wynn takes you away from it all.” 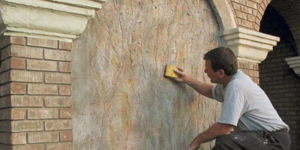 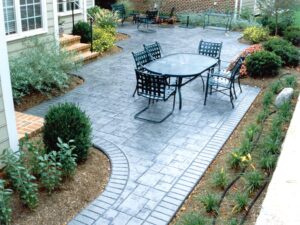 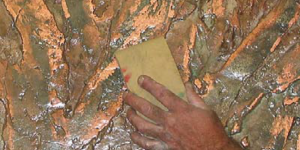