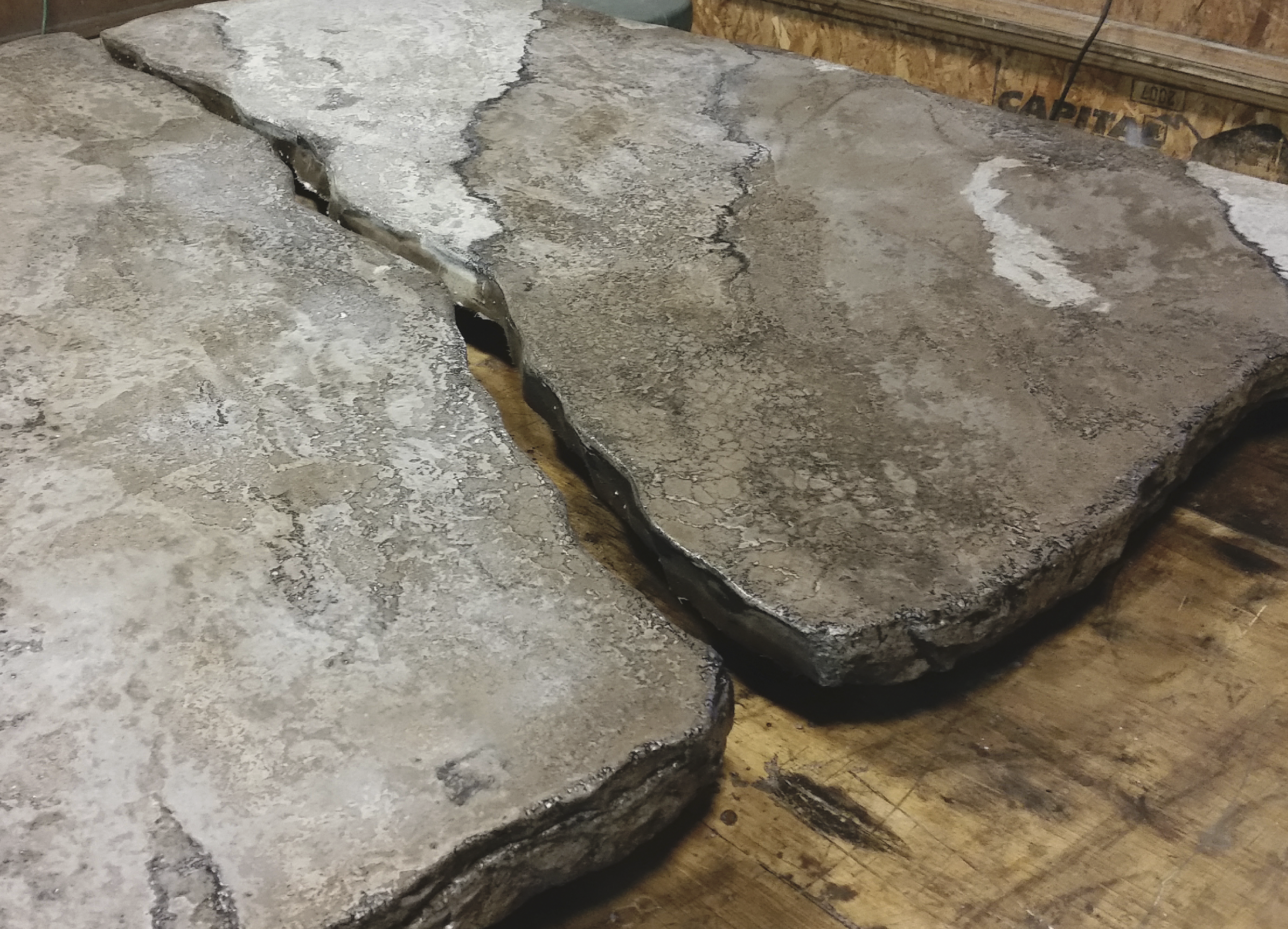 Generally speaking, you’ve got to be really good at what you do to have your methodology named after you. That’s the case with Ben Ashby, creator of the Ashby Countertop System line of products that are available from StoneCrete Systems in Orem, Utah. And, in particular, his bilevel concrete countertops.

Ashby, who is a member of the Decorative Concrete Hall of Fame, grew up in the concrete industry. His father was a concrete contractor and his mother was a professional artist. When the younger Ashby was a teenager, he worked as a full-fledged form setter and finisher.

His father’s influence shows in his work, he says, but so does his mother’s in equal measure. The combination of the two skill sets is how this artisan comes up with his remarkable countertops. 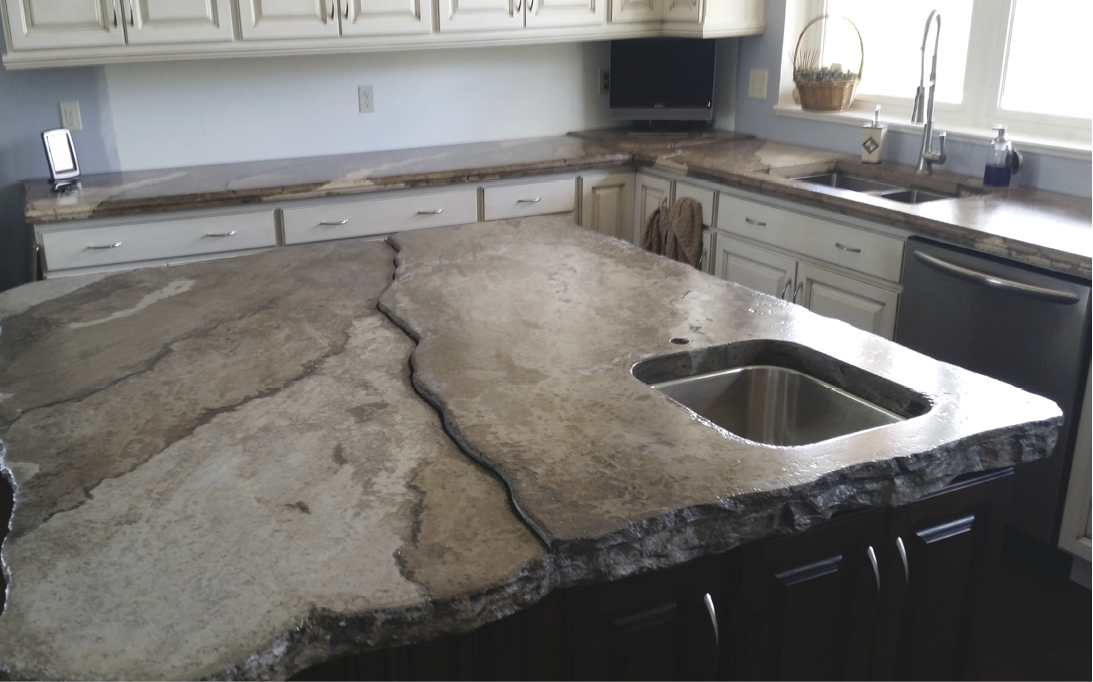 A bilevel is born

To explain bilevel, it’s best to picture a normal flat countertop. Countertops are supposed to be flat and one level, right? Well … not so much, once you see Ashby’s design. Picture a countertop that’s flat until about midway or so. At that point, there is an interruption on the surface where a raised edge (that looks a little rocky) and marks the beginning of another flat surface … just slightly raised. That’s an Ashby bilevel concrete countertops.

Ashby says he didn’t come up with the design because he had an eye toward being super innovative. “It was really born out of necessity as a result of my desire to pour all my countertops in the controlled environment of my shop,” he says.

Because his counters aren’t poured in place and some are really big, “There were countertops that I simply couldn’t fit through the doors of a house,” he says, and he needed to make them in two sections. He figured no one would want a seam running down the middle of their kitchen counter, so he had to come up with a way to make one attractive.

His solution was to position the seam — not a straight-edged seam but one that had rock-like characteristics — where the surface elevation would change. 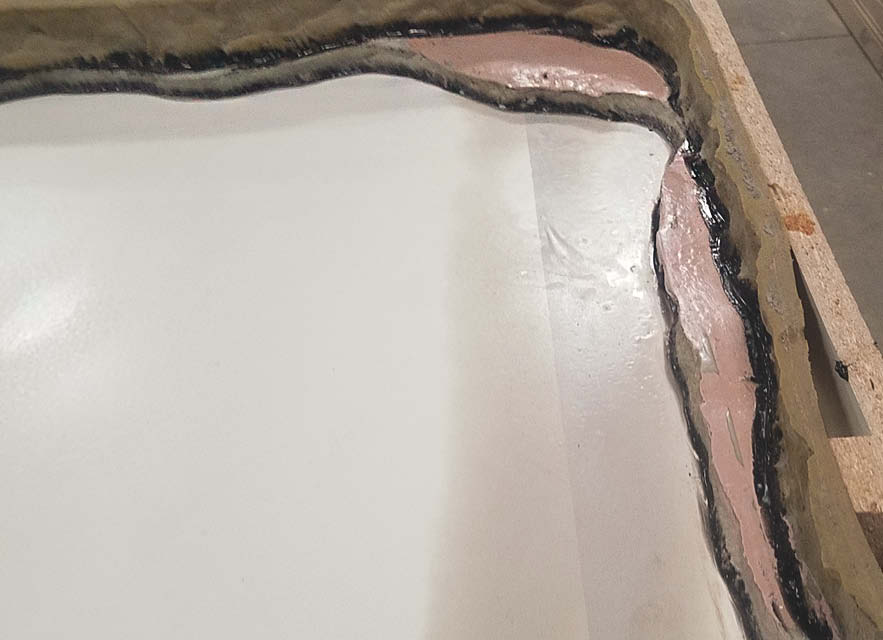 Some of his bilevel concrete countertops are one piece, with the height difference built into the form. Others are two pieces that vary in thickness. The joint then happens during the installation process. The offset from one level of a countertop to the next is generally about three quarters of an inch, but Ashby says he can easily adjust that to fit a customer’s desire.

The need for control

Part of the unique aspect of his countertops is in the colors and textures he uses. He achieves these partly because he developed his techniques in static conditions. Plus, Ashby says, “That’s just the way I’ve always preferred to do it. I like the additional control I have with precast versus poured in place.”

Ashby says the last thing he wanted to do was pitch countertops with seams down the center to customers. “I couldn’t imagine that customers would want that. Instead, it occurred to me that a bilevel countertop with about a three-quarter inch differential might work. It’s not necessarily to hide the seam, though it functionally does that.”

He admits that selling a customer on the idea of a bilevel concrete countertop wasn’t all that easy. People balked at the idea at first. For instance, they questioned whether there would be problems with glasses spilling.

Somehow, Ashby talked the fledgling bilevel countertop customer into the idea. “Even I was surprised at how happy she was with the design and how it didn’t affect the way they would normally use their countertop in the least. No extra care had to be taken to avoid spills or to avoid any other concerns. She was especially happy with what a conversation piece it was.

“A countertop as a conversation piece? Imagine that,” says Ashby. “Every customer I’ve done a bilevel counter for has been pleased with the result.”

The concrete countertops are suggestive of water-worn rock in a river­bed or patterns in beach sand at low tide, but without the ridges and unevenness of real riverbeds or beaches. Ashby’s system mimics that look primarily with colorants and a proprietary product called Marbleizer. The bilevel aspect simply enhances the effect. 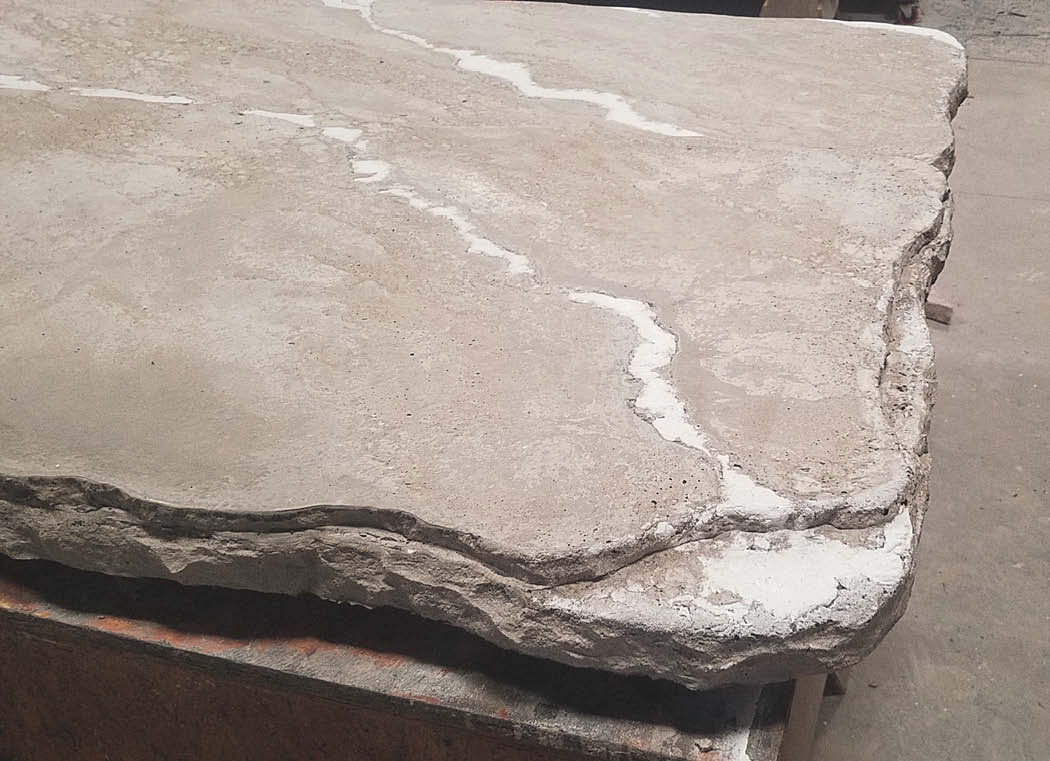 StoneCrete has developed some additional products that Ashby uses in the countertops. There are three admixes available. All three work for precast and one works for pour in place if needed. Two are GFRC, while the other requires steel reinforcement such as rebar.

Ashby points out that one advantage is that you don’t have to spray the counters, therefore eliminating the time and labor of cleanup. Plus, it’s a much faster process than other methods. As for colorants, Ashby almost exclusively uses Davis Colors dry pigments.

“From an artist’s standpoint, I’ve found that I can do things with dry pigments that I can’t do with liquid colorants,” he says. “We can get amazing color bursts simply by manipulating the ratios of different pigments. You just can’t get the same effect with liquid pigments.”

Speaking of art, the edge molds Ashby has designed are truly distinctive. “Broken Flagstone” mold is his mold preference on most of his countertops. This mold is available in two sizes. It isn’t really a pattern, he says. It perfectly mimics the look of a broken edge of stone, accentuating the look of stone influenced by the forces of nature. For his forms he uses melamine board because it releases well from GFRC.

Ashby says there are two reasons he uses Davis Colors. The company has been around forever, and its products are readily available at many local concrete supply stores.

“I’ve used Davis Colors for so long that it makes it easier to explain coloring questions to students in my classes. If a student asks how I achieved a certain color, I can explain it in Davis Color terms,” he says. 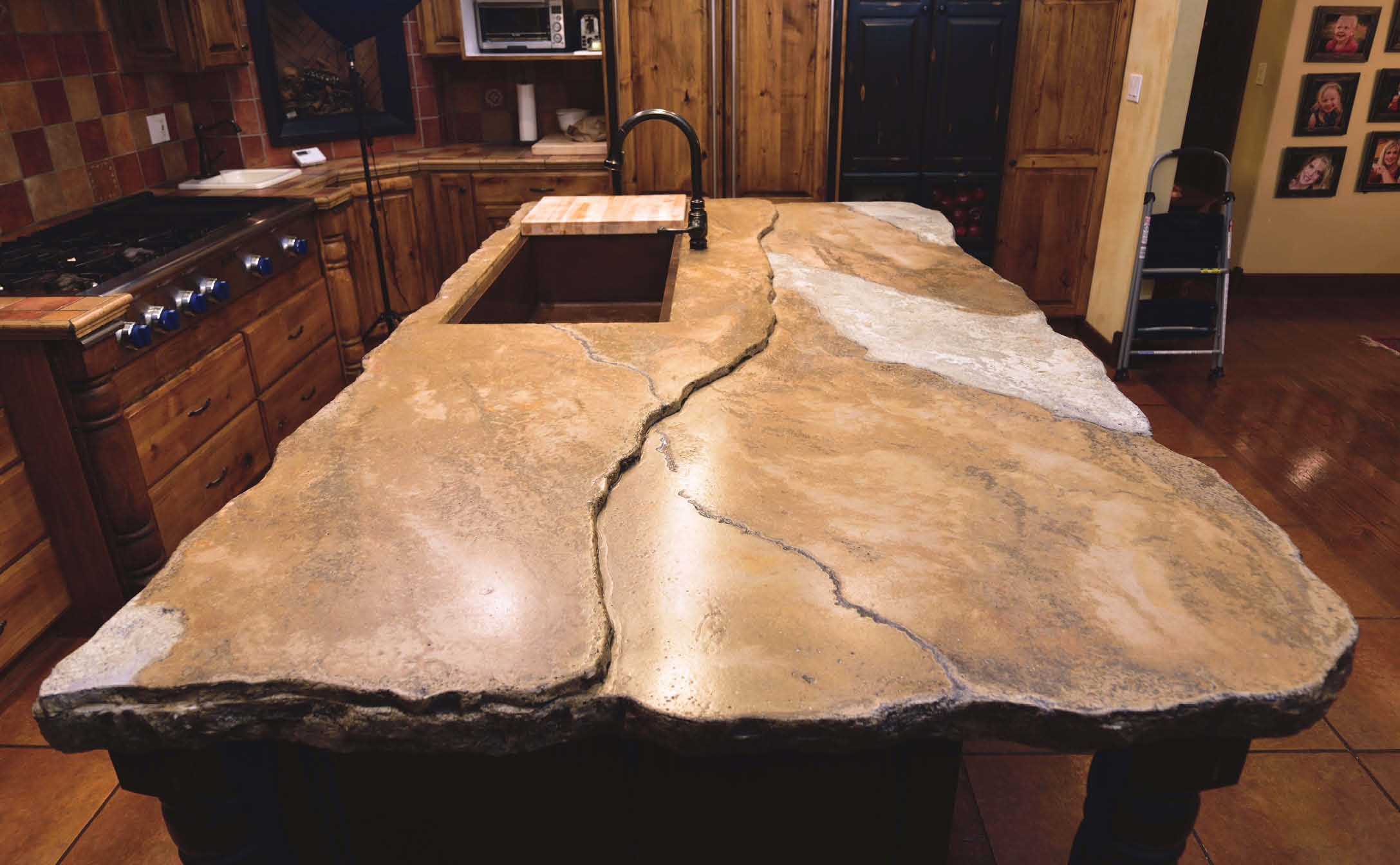 Ashby uses exclusive sealers to finish his countertops: Ashby Super Seal (it pops the color, he says) and Counterseal 3. Both are water-based and are available on the StoneCrete website.

Even though Ashby’s techniques are unique and proprietary, he enjoys teaching others how to achieve the same results. He holds three-day seminars at his shop in Farr West, Utah, teaching his methods to fellow contractors. He also offers a series of videos, so artisans can learn off-site.

Ashby offers advanced courses twice a year. Part of the curricula in the advanced course is teaching concrete contractors how to make countertops using materials that can be found in nearly every local hardware center. StoneCrete Systems sells Ashby’s specialty products that aren’t available at local centers.