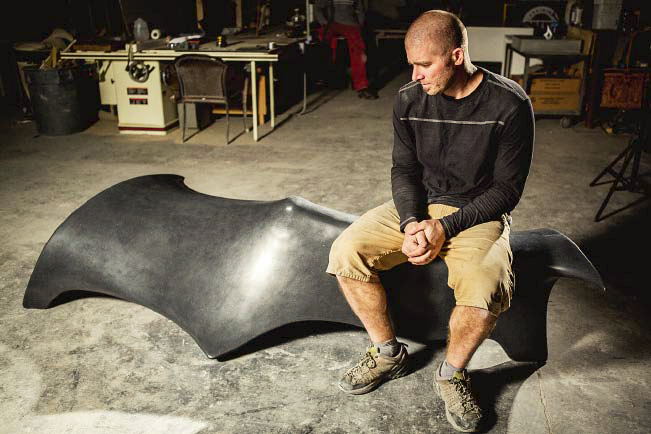 Bars and countertops are “anticlimactic” to this month’s artisans in concrete, Justin Burd and Nathan Smith. “We’ve been trying to push the limits of what concrete can do as a medium by creating good design and shapes that are not often seen within our industry,” says Smith.

Burd, 36, who is originally from Chattanooga, began working with concrete while living in West Virginia. He had his own business called Tribe 1 Customs, which he started in 2006. “I was remodeling a friend’s house who wanted to install concrete countertops,” says Burd. Buddy Rhodes’s first book on concrete countertops was loaned to him to get him started. “I cast my first piece for the first kitchen I worked on, and my friend really liked it. Somebody else saw it and they wanted it too and that’s when the snowball started rolling downhill.”

Smith’s back story is similar. Smith, 32, installed a concrete countertop when he was building his own home in 2007. Someone saw it, liked it and wanted one too. That’s when Smith realized that concrete installation could be a profitable business.

Burd says at the time there was no one else in his area of West Virginia doing concrete work. “This was right when the form was getting popular,” he says. “I had pretty much laid down as much concrete as I could where I was, so I needed to move on. I started out with countertops, but then when I started to grow, my mind took me other places. I started thinking about the possibilities of furniture and sculpture.”

He had his business for nearly three years, then moved back to his hometown of Chattanooga. He joined forces with Smith in 2009, becoming a co-owner in Smith’s business, Set In Stone. The two friends inspire each other and push each other to greater possibilities.

“Once I hooked up with Nathan I got another creative brain to bounce ideas off of and work with,” says Burd. “Everything kind of fell into place here. It’s a real good partnership.”

Burd and Smith are both avid outdoorsmen. “If I’m not in the shop or asleep I’m usually outside in the woods or rock-climbing or power-boarding,” says Burd. “I feel like one of my most inspiring places to be is outside. I do a lot of my best thinking out there.” When Burd is out in nature, his eyes notice the shapes and patterns around him, such as flowing water and rocks. “Both of those elements appeal to me and it really comes out in my work,” he says.

For Smith, the element that continually inspires him and manifests through his work is steel. “Nathan is very inspired by minimalism too,” says Burd. “He definitely has a belief that less is more, and you can see that in a lot of our work.”

The future will be fabric-formed
Smith and Burd do a lot of custom work for both residential and commercial spaces. They also have their furniture and other objects in galleries. “We’re kind of speckled all over the place,” says Burd. “We’ve built a reputation to where people have an idea and they’ve seen our work and they want us to put our twist on whatever it is they want.”

These two creative minds are putting their effort into building up their online presence through a Web store. They plan to focus more on sculpture in the future. Whatever they make, it’s likely to be fabric-formed. “We feel fabric-forming is so great that we’ve changed our mix designs to pretty much use GFRC all the time,” says Smith. “GFRC allows us to build more complex shapes easier. Justin and I started using wet-cast, and we still do that every once in a while, but for the most part we’re using GFRC every day.”

One sculpture, a detail of which is on this issue’s cover, was an early experiment in fabric-forming. That 5-foot-by-3-foot piece, called “Absolution,” is now a public art piece in downtown Chattanooga. “Absolution” was created using a Buddy Rhodes Concrete Products mix that is “another tool in the toolbox,” Smith says. “We’re using that for countertops that are 1-inch thick or 3/4-inch thick instead of casting 2 inches thick. It’s enabled us to go lighter — less material and lighter weight.”

Smith and Burd are head trainers for Buddy Rhodes Concrete Products. And they are increasingly excited about sharing the possibilities of Buddy Rhodes materials.

“We’re really trying to bring training back to life because we’ve felt that training has gotten a little diluted,” says Burd. “We’re trying to bring in new twists. That’s always what we try to do.” After a brief pause, Burd continues on. “No, we don’t try, we do. We set ourselves apart.”

The trainings typically teach people how to make concrete countertops and other concrete objects using Buddy Rhodes mixes and Rhodes’ signature techniques. “We’ve evolved the program to include techniques that we’ve personally come up with,” Burd says. “We don’t just do countertops. I’ve added to the curriculum to create different objects, not only to make it fresh for me to teach, but also so the students see other things besides countertops.”

Larger and lighter
The pair’s customers give them a lot of creative freedom, whether it’s for a functional installation such as a full-scale shower or for a decorative garden sculpture. “Now that we have these GFRC mixes it’s expanded our reach of what we can do,” says Smith. “We’re making 20-inch-long pieces without a seam. It’s bringing a whole new dynamic to the industry.”

One of the “wildest” things that Burd says they’ve done was a massive 700-pound fabric-formed concrete headboard embedded with fiber optic lighting. “Cool things like that,” Burd says.

Another of their projects was a 22-foot waterfall. It was cast in two large pieces and placed on top of a building for the owner of a penthouse apartment. “We cast it in our shop and had it craned onto the rooftop,” says Burd. “He had an open rooftop space and it was on one of the exterior sides of the building. It had a kind of infinity edge.”

Another memorable project was the Elements Bench made at the Artistry in Decorative Concrete demos at the 2011 World of Concrete. The bench is an homage to the elements of fire and water and the idea of rest, incorporating a fountain and a fire floating up from a bed of lava rocks. “That’s definitely pushing the limits of GFRC concrete,” says Burd. “It’s 1 inch thick and 22 feet long.”

A chair, formed from a combination of bent metal and concrete, is actually a lot more comfortable than it might look, Burd says. The pair made several mock-ups to make sure the chair was ergonomically correct. “And there’s storage under it because it’s hollow,” Burd says. “So if you get cold you can always throw a heater under it!”

Each summer in Chattanooga, the pair host “Nightly Build” classes from 6 to 8 p.m. one night a week for a month. Their hope with the Nightly Builds was that people who work full-time day jobs could pick up some tools and do something creative. Participants in the workshops get to make something useful that they can take home with them at the conclusion of the class. Set In Stone has also offered concrete-making activities for special events in Chattanooga. These activities are aimed at children, although Smith and Burd find that adults are enthusiastic about them as well.

“I think that Nathan and I are an awesome combination for what we do,” says Burd, “because if two people are going down the same road you don’t have room to grow. Nathan and I are similar but we’re also different and I think that’s key to the things that we have done and what we will do. I’ve learned a lot from Nathan and hopefully he’s learned from me too.” 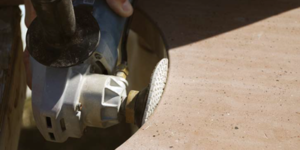 How to Excel at Concrete Countertop Sink and Edge Fabrication