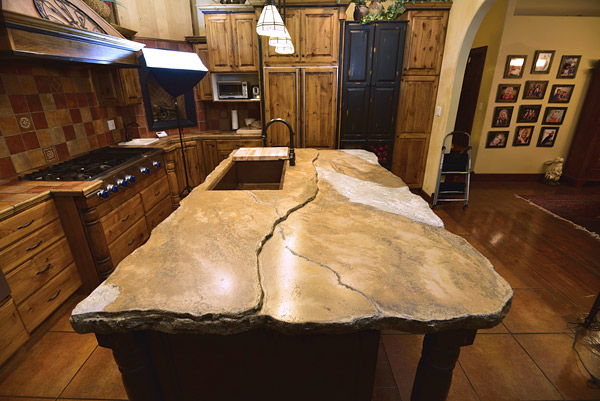 Ben Ashby got an early education in concrete from a father who he says was “stubborn as a mule and tough as nails,” but who also provided the young Ashby with the drive and motivation to succeed.

His father, who recently passed away last December, was an “old school” concrete worker who taught hard work. “I remember my first day on the job because I was 5 years old carrying around a 4-foot level,” Ashby says. “I don’t think he actually used the level I was carrying around but it gave me something to do and my father wanted me to do it because that’s how you learn to work hard.”

It’s always been concrete
At 12 years old Ashby went to work full time for his father and never considered any other career. “I just knew concrete was something I was going to do from day one,” he says. “In ninth grade I started doing a work study program and only going to school half a day because concrete was what I was going to do so I didn’t need to take unnecessary classes.”

By 16, Ashby was a full-fledged form setter and by 18 was a qualified finisher. Decorative concrete was barely emerging — Bomanite had just started — but Ashby did do some hands-and-knees decorative work including a simulated flagstone pattern that he drew by hand.

Ashby’s mother is a professional artist, and his older brother is a professional guitar player, while his other brother is also a musician and artist. Ashby himself started playing in a band in the seventh grade and still does. He ended up going to college, but only because he was offered a full scholarship if he played in the school band at Weber State University in Ogden, Utah. While in school, he ended up traveling around the world with the USO and coming back home to work with his father in concrete during breaks.

At 21, Ashby approached his father and told him he wanted to run his own crew. His father rebuked this notion and told him he would never split his crew and he was the only boss the crew would ever have. Young Ashby bristled at this reply and right then and there decided to strike out on his own. On his birthday in November 1984 — right as the work season in Utah was winding down and winter was taking hold — he headed to Arizona.

He never looked back
“My dad told me to go ahead and play with my own crew but that I’d be back,” Ashby recalls. “I made sure I never had to go back just because he told me I would come back. That was the type of guy he was and that was how he motivated me.”

Within one week in Arizona, Ashby was a foreman and within five years he had moved up to superintendent. He spent 20 years in Arizona slowly developing the system for concrete countertops that now bears his name, the Ashby System. His technique involves using mostly standard ingredients to create a look of aged concrete or stone.

Ashby says the first thing he searched on the internet was “concrete countertops,” where he found >— and purchased — a book by FuTung Cheng. Cheng’s modern, clean look did not resonate with Ashby, however, and although he admires his style and the installers who create it, it’s too “loose and earthy and organic” for his taste.

“It just didn’t work for me,” he recalls. “I had my wife’s kitchen knives out in my shop trying to carve (concrete) to make it look earthy. Almost everybody out there is trying to make concrete perfect. Perfect mix design, perfect aggregate and perfectly flat so when it comes out it’s like perfect glass. I can’t do it that way.

Establishing his own system
Although Ashby’s work was successful, he also didn’t want to pay to ship aggregate across the country or buy proprietary ingredients, so he developed his own glass-fiber reinforced concrete mixes and techniques using mostly what was available in any local hardware store. Today, he shares these finds through classes he offers on the Ashby System.

In 2008, Ashby teamed up with Gerry Sadleir, vice president of Concrete Solutions for 25 years and a trainer for 14 years, to create Countertop Solutions. Ultimately Countertop Solutions became StoneCrete Systems — the emergence of new and innovative flooring systems required a name change. The company offers its line of countertop mixes, colors and molds with Ashby’s sink, edge and decorative molds, along with new sealers and polishing spray products. The Ashby System utilizes only one proprietary product, Ashby’s Marbleizer.

Although the concrete resulting from Ashby’s System looks like stone, it’s not because of faux finishing or any painting technique. “You don’t need to have any skill as an artist to do this,” Ashby says. “This is all about just manipulating the concrete to let it be concrete and do what it does.” 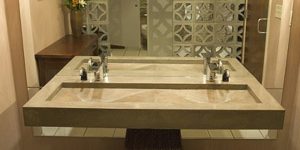 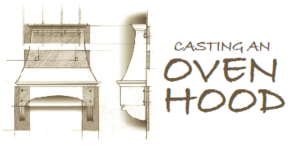 How to Design, Cast and Install a Concrete Oven Hood – Part 2 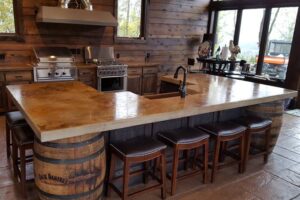 Whiskey Themed Kitchen with Barrels and a Concrete Countertop