We usually don’t post photos of people just goofing around with samples of decorative concrete, but these pieces are wild.

DiGiacomo calls these effects “lava colors.” They’re metallics swirled into water-based acrylics, which are apparently custom blends. “Can’t disclose what kind of stains I’m using yet,” he tells us, “until I know what the heck they are myself. All from scratch, from mismatched stuff.”

The sink is an old one, resurfaced with an overlay and hand-colored. A red and black counter is an overlay over Formica. They were samples for a show in Maui, he says. “Came up with my own products here using banana skins, coconut oil, tea leaf wax and pineapple juice — just kidding, but as scarce as products are here, I almost have to. Going to start high-end training on Maui soon … It’s taken one and a half years on Maui now to finally get some stability and for locals to trust the newcomer. Looks like I’m finally earning their respect.”

The Phoenix-based Academy’s website says DiGiacomo “has been an established artisan for over 30 years and helped pioneer the introduction and unbounded applications of acrylic concrete coatings here in the Valley (of the Sun).” 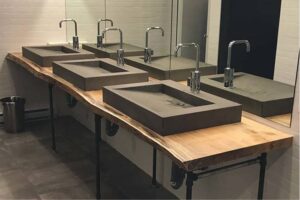 Sealer is the Most Critical Success Factor for Concrete Countertops 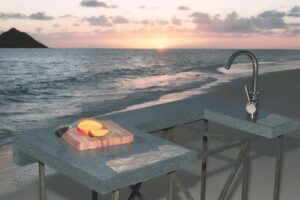 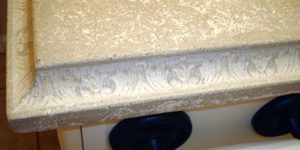 How to Combat Common Misconceptions about Concrete Countertops