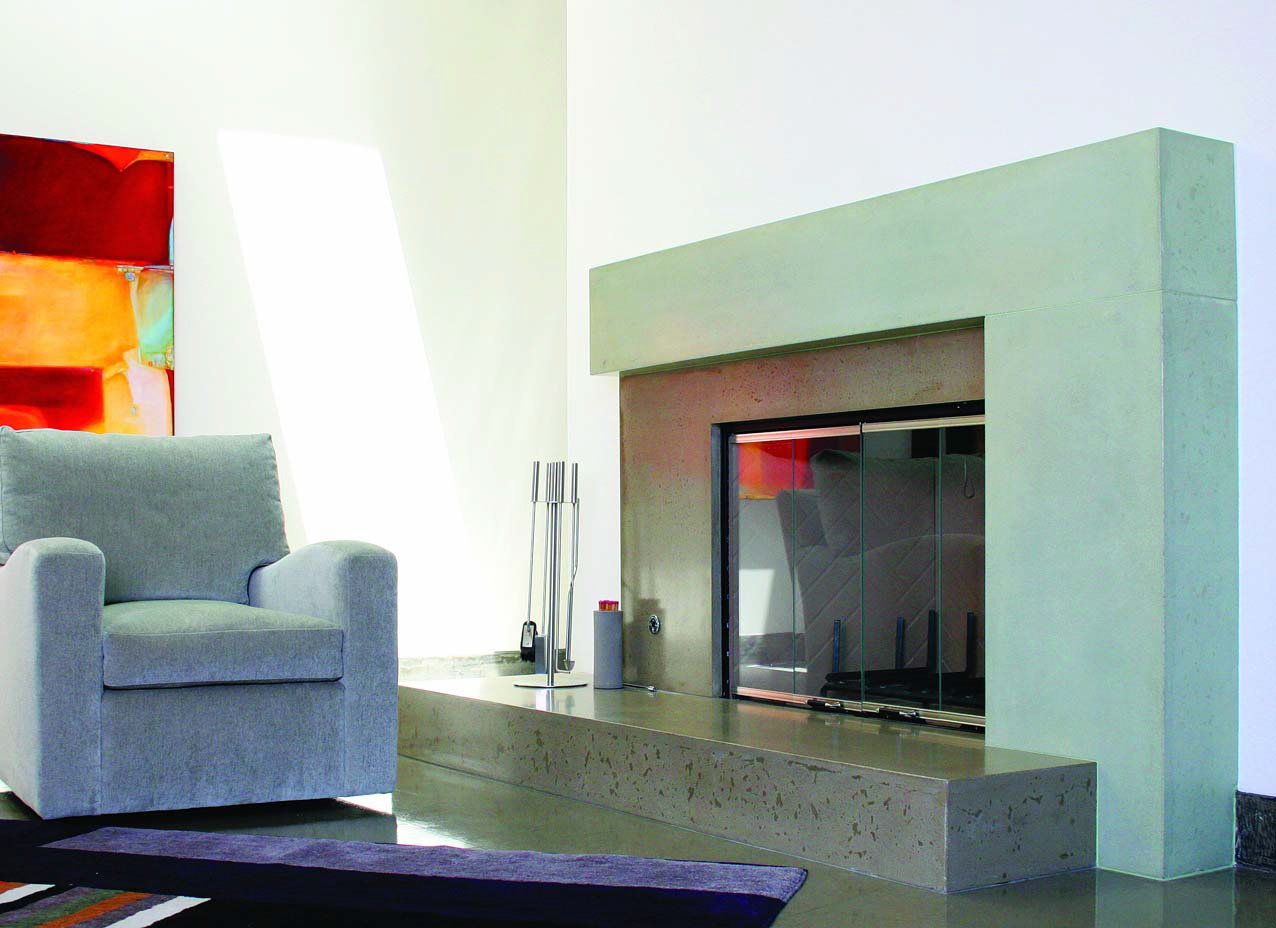 Interior decorative concrete is all the rage for countertops, floors and bathtubs, but nowhere does it pack more design punch than in fireplace surrounds and hearths. Fireplaces are inherently the “heart of the home,” and a striking concrete surround takes that role to a higher level. “You can make concrete forms look more three-dimensional and massive than wood,” says Buddy Rhodes of Buddy Rhodes Studio in San Francisco. “The fireplace has a presence in the room — it becomes the dominant force.”

Blayde Penza, president of Advanced Concrete Enhancement Inc. (ACE), in Sun Valley, Calif., feels the same way. “People love concrete for the look you can achieve,” he says. “The first impression is not, ‘Oh, that’s concrete,’ it’s ‘Wow, that’s stunning — what is it?’ A concrete hearth becomes a conversation.”

Mark Lesnick of Mark Concrete, in Moss Landing, Calif., likes the natural look of a concrete fireplace. “Traditionally, fireplaces were masonry or stone for fire resistance. Concrete is made of similar natural materials and has that same feeling. It makes more sense than wood or marble.”

Concrete properties
Concrete has unique properties that set it apart from wood or stone hearth materials. “The primary advantage of concrete is unlimited design options,” Penza says. “There is so much we can do with concrete to make it suitable for any type of décor.” 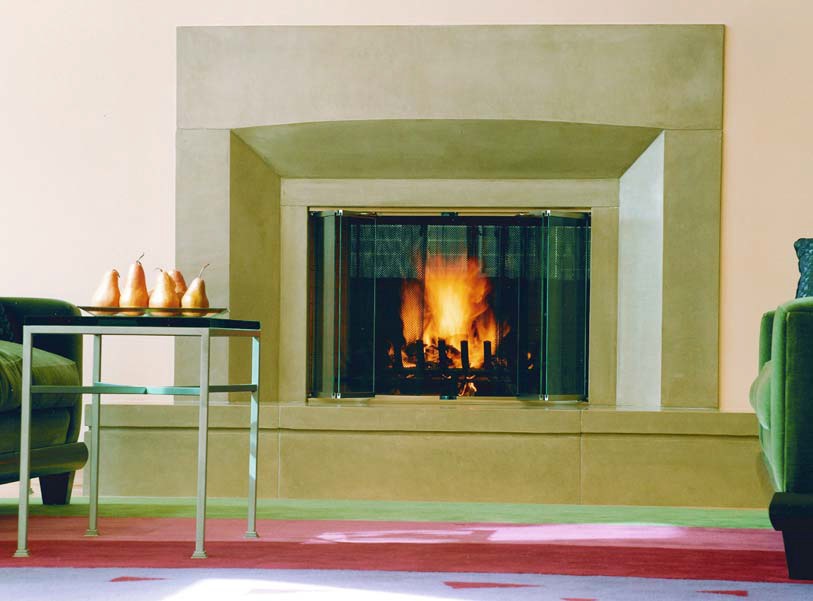 Dana Hochberg of Get Real Surfaces Inc., Poughkeepsie, N.Y., says, “Because concrete is cast rather than carved, you can get more complicated shapes — any shape you want.” Dave Pettigrew, of Diamond D Co. in Capitola, Calif., likes the fact that he can color the concrete to match any décor or designer’s color scheme. “They have a hard time doing that with other materials.” While there are some contractors who create molds and reuse them for certain details or standard openings, the consensus is that the biggest advantage of concrete is the ability to create one-of-a-kind architectural elements that complement the design of the whole house or structure.

This versatility also makes concrete cost-effective for elaborate designs. “With marble or granite, you have to tool the shapes in stone,” says Fu-Tung Cheng, principal at Cheng Concrete Exchange, a division of Cheng Design in Berkeley, Calif. “We tool the mold material (polyurethane or casting plaster) instead and that is less expensive than carving and polishing stone.” Hochberg points out that it is difficult to compare material costs directly because there are so many other variables. “Comparing the cost of a concrete fireplace to stone or brick depends on the design. A flat rectangle is comparable to natural stone. When you’re dealing with a shape, concrete is more economical because it takes less time to achieve the shape.”

Pettigrew also likes concrete because it is warm and inviting. “Concrete hearths radiate heat and they are comfortable to sit on.”

The mix
Fireplace surrounds can be made from the same mix used for countertops and other interior applications. Cheng recommends a high-quality countertop mix — a 6.5 sack mix that he says “is a little creamier than the usual 5.5 sack mix. That gives more definition to details.”

Some artisans develop unique mixes for the look and performance they want. “Most people who do this well have developed their own mixes,” Penza says. “We developed a mix design with eight different components. It is very stable — it won’t warp or curl. We guarantee it won’t crack. There are many ways to make concrete stronger — water reduction is one of them.”

Rhodes also keeps water in his mix to a minimum. “I’ve developed a mix to make massive hollow forms,” he says. “The concrete is just an inch-and-a-quarter thick. The mix is like dry pastry dough and I use an additive to make it plastic. I pour it into a negative mold and butter it up the sides. I pack it into the mold and make hollow forms. Then I trowel the surface the next day.”

Pettigrew likes concrete with a “real low slump,” so he uses a water-reducing additive. He says, “Don’t use a lot of water — water is the enemy. Too much water will make concrete crack or shrink or curl.” He also adds fiber of manmade material similar to that used to construct Stealth aircraft. “It makes a web in the concrete to help prevent cracking,” he says.

For aggregate, Rhodes likes to use marble chips, dolomite and silica sand. He says these make the concrete buttery to trowel — and the exposed marble creates a nice look for polished surfaces. He uses a finer aggregate than a normal bag mix and also uses white cement.

Keeping weight down is a factor when creating massive forms such as fireplace hearths and surrounds, and that sometimes dictates the aggregates that are chosen. “We’re not looking for a heavy structure,” Cheng says. He hollows out forms with foam to cut down on weight and then uses pea gravel for better detail. Further, he says, “If necessary, we’ll go to lightweight expanded shale as well, to achieve a 20 percent reduction in weight per volume.”

Mark Lesnick uses a similar technique. “We use expanded shale aggregate so the weight of our units is about two-thirds the weight of typical concrete,” he says. “This makes them easier to install.”

Precast or cast-in-place?
Whether an artisan creates fireplace hearths and surrounds by casting them on-site or precasting in the shop seems to be a matter of personal preference and experience. Cheng’s fireplaces are usually an element of a larger overall design. He builds forms or uses molds on-site, using plastic to create a barrier between the wall and the pour.

A large proportion of Pettigrew’s business at Diamond D Co. is remodeling. He builds forms or Styrofoam molds over existing fireplaces and casts in place. He also uses microtoppings in certain remodels. Microtoppings easily cover brick or masonry and can be finished like concrete or troweled to resemble stucco.

On the other side, Penza says that his company precasts in a controlled environment. “This allows us to control curing and the overall process,” he says. “It is also more convenient for the customer and for the other trades working on a project.”

In either case, it is critical that the structure of the house be adequate to support a concrete hearth and surround. “Make sure the foundation can handle the load,” Cheng says, “and don’t cantilever the hearth too far over the floor joists.” He casts around bolts tied in with wire and rebar that are then lagged to the framing. In a similar technique, Rhodes casts in a brick tie or metal tab that can screw into the stud. In addition he uses mastic or construction adhesive, a “belt and suspenders” approach also favored by Hochberg, who recommends installing a plywood frame around the fireplace and using masonry fasteners and thin-set adhesive to fasten the surround.

Finishing
It seems there are as many color and finish options for concrete fireplaces as there are artists to dream them up. One school of thought tends toward an understated, natural look. “We use integral pigments to achieve fairly muted art tones for fireplaces — earth tones, browns and grays,” Hochberg says. “Brighter colors become dated. Generally all our work is finished by sanding to a low sheen.” Rhodes uses mostly gray, with some tan, black and smoky colors. His finishes range from hard-troweled to ground and polished. He also specializes in a pressed surface where he backfills voids with colored concrete paste and polishes the surface.

Cheng also belongs to the “natural look” school. “Colors that evoke the bottom of a riverbed or leaves in a stream tend to be timeless. We don’t use white cement and we don’t have a big color range, based on my feeling that if you offer too many bright colors it’s all very trendy and it becomes difficult for the client to settle in on a color.”

At the other extreme, Pettigrew uses every technique known for coloring concrete and says, “I’ve never had a color I couldn’t match,” an ability that plays well to the remodel market. He adds Davis Color’s integral color to the ready-mix if he is pouring more than a yard of concrete. Otherwise he mixes integral color on-site. He also uses chemical stains to create unique surfaces in blue, brown, black gold and green. He favors penetrating pigments to match Pantone colors. “The pigments are not opaque, so the concrete looks like a natural piece of stone,” he says. “You can look through the color and see the nature of the concrete.” 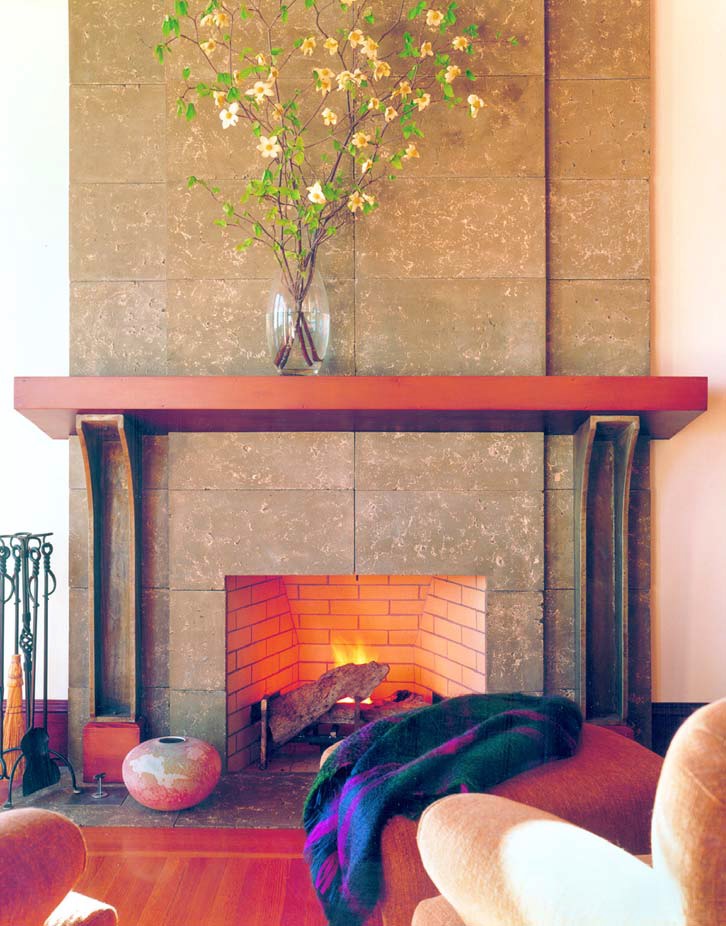 Lesnick likes to use iron oxide pigments. With a palette of about 150 colors and five or six different finishing techniques, he offers customers a lot of variety. He uses a light diamond polish to make concrete shine, and more aggressive grinding to expose aggregate. He offers a natural finish with air holes, the way the concrete comes out of the mold, for an industrial feel. He says acid-etched surfaces look like sandstone and sandblasting looks rustic and aged. His company also offers a unique crackle surface, which he achieves by manipulating the mix to force surface microcracks and then using stains to create an antique look. He first developed the technique to match a customer’s crackled-glazed tile.

Advanced Concrete Enhancement also offers a large color palette. Penza recommends always showing customers samples. Further, he says, “You have to be able to control and reproduce colors. Documenting is very important. We once poured five different pieces for the same project — it was Murphy’s Law at its best! One piece was broken, one was measured wrong, one was recast because the customer wanted to add something. In the end, five different pieces were poured at five different times and every one matched. That’s when we said, ‘Wow, we’ve got the colors figured out.’”

The final finishing touch for most concrete fireplaces is a sealer. Many fireplaces today are gas, but in the case of a wood-burning fireplace, there is a chance for a log or ember to fall onto the hearth and char the concrete. A sealer offers a sacrificial surface: If it chars it can be sanded off and new sealer applied with no damage to the concrete. Any sealer suitable for interior concrete may be used.

Every job is unique
Surrounds and hearths offer more opportunities for expression than almost any other interior concrete project. Pettigrew tells a story that perfectly illustrates the agony and the ecstasy of creating fireplaces from concrete: “I had one lady who wanted her hearth ‘smooth, but rough.’ Now how was I going to do that? I woke up one morning and I remembered one time I rolled up excess concrete in plastic to dispose of it. It had rough grooves, but was shiny-smooth on the face. So I put plastic on the forms and made some creases and wrinkles. I rolled concrete over the top, weighted it with cardboard. When I pulled the plastic off after cure, I had rough depressions and cavities and a smooth surface. When she saw it she said it was exactly what she had in mind.” 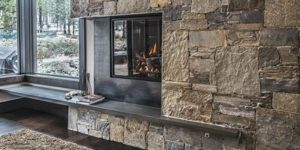