Dan Lynch, a concrete artisan known for his concrete floors that look like wood, grew up in Southern Louisiana, near New Orleans, with five sisters, three brothers and a father who did concrete work. In his N’awlins drawl, Lynch says he’s “53 years young,” and he’s the only one of his siblings who still does concrete work.

“I grew up in the business,” Lynch says. “I’ve been in business on my own for about 20 years. I left my dad in ’98. If you’re talking concrete work in New Orleans or in the surrounding areas, the name Lynch is going to pop up without a doubt.”

His father’s business was installing traditional wooden floors, but at one point a 14-year-old Lynch went with his father, Jim, to Destin, Florida, to do a job for an architect who wanted concrete floors in his condo. 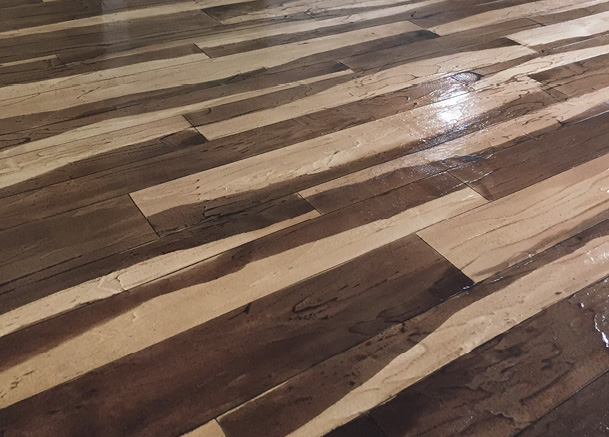 Two months later they did another concrete job. That was in 1979 and it took off from there, with one concrete job a month and then two. His father sold all his wood floor tools and equipment and went into decorative concrete.

Of course, back then, it was different. “We used a chemical acid stain,” Lynch recalls, and sealing those concrete floors was labor-intensive. Dipping into a 5-gallon bucket, “We’d scrub the stain on our hands and knees with an acid brush and then we’d buff wax everything with a paste wax. We really didn’t know.” 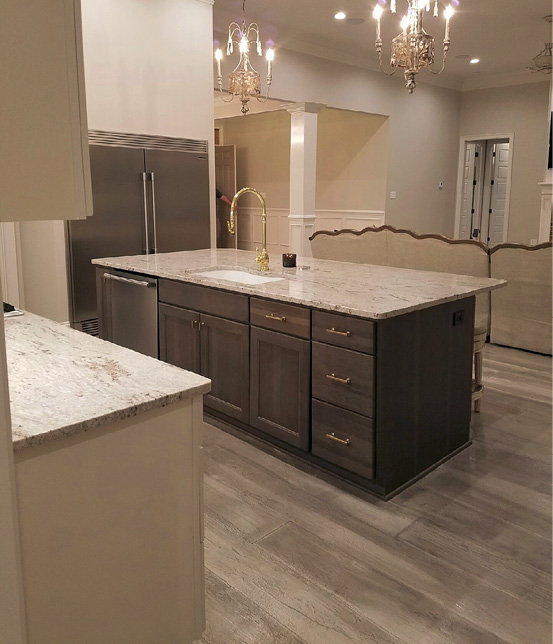 Branching out on his own

Lynch describes leaving his father’s concrete business as a situation of being in an old school and wanting to do things his own way. “When I left I got to be more creative and change things up a little bit,” he says.

Lynch started doing overlays six years ago, using self-levelers and microtoppings. He used to be against overlays, because he had seen so many of them fail. Then he figured out the issue was the installer going over the expansion joints and not properly prepping the concrete. 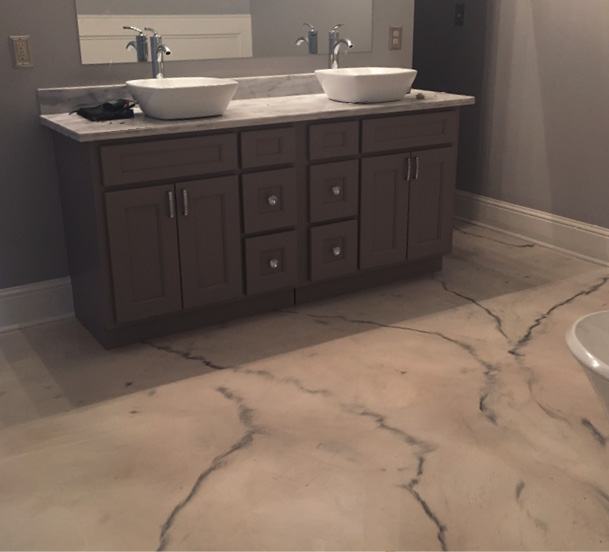 Now, he does more overlays than stains. “It’s a trend that’s going to be around for a long time,” Lynch says. “And the overlays on the market now have come a long way.”

His primary market is high-end residential, and he enjoys meeting with the homeowners and walking them through the design process. Last year, Lynch installed 65 stained floors in new homes for one builder. All had a similar color palette and only seven of them were scored. 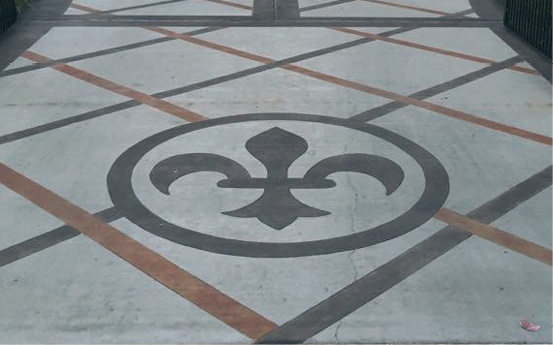 “When you walk into a house you should have a good flow,” he says. “Borders, I like them, but I don’t include them in a lot of my houses because I think they close rooms in. The biggest trend now is people want open spaces. To me putting patterns around dining rooms, kitchens and living rooms is like building walls.” 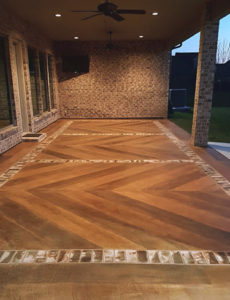 In one recent case, though, the pattern decorating part of an 1,800-square-foot floor was reflected in other decorative elements, and that made sense. “I put 12-inch white diamonds and 2-inch weathered-wood basket weave just in the foyer,” Lynch says. 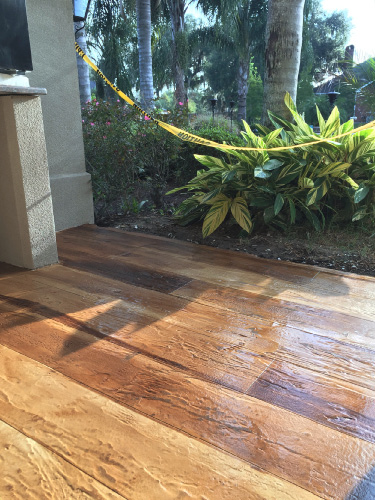 One of the jobs Lynch loves most is in his own office. He installed a Jack Daniels floor using an overlay made to look like old oak strips. He put the Jack Daniels logo in the middle of the floor, with barrel heads around it. One of his employees, Elkey Burlette, is a graphic designer who did all the stenciling.

The customers who hire Lynch for his wood-look floors pay a premium for that look. They can sometimes save some money by using stains or other designs in other rooms or in part of the rooms. He charges $3.50 per square foot for designs such as in the foyer described earlier and $4 per square foot for stain. He uses water-based stain, which he feels comfortable with after a lot of trial and error.

“I get nicer colors with the water than the acid,” he says. 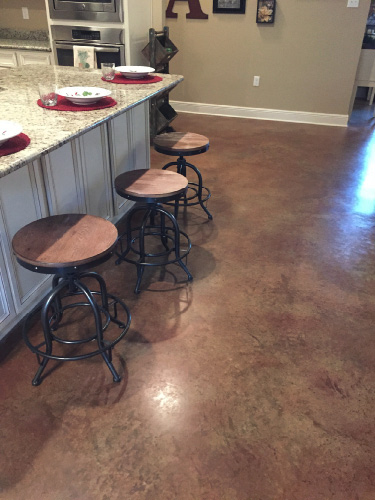 Homes in Louisiana are good candidates for concrete floors that look like wood. “They’re less expensive than real wood floors,” he says. “Also if you have a hot water heater bust, you just wet vac it up and you’re good. If you have laminate and your house floods, you’re looking at trouble.”

After Hurricane Katrina devastated the area in 2005, Lynch revisited some of his older jobs. “All we had to do was clean them up and they were as good as they were before the flooding, so that’s a selling point for me,” he says.

“People got tired of the acid stains somewhat and the wood floors are the latest and the greatest. I think they’re beautiful. They have longevity and they’re only going to get more popular.”

Last year, Lynch quit installing for several months to open Ashley’s Concrete Products in Harvey, Louisiana. Named after his daughter, the supply business is now able to operate without his daily oversight, so now he’s installing a few more floors.

He’s also busy training and doesn’t worry about competition from others knowing how to install the wood-look floors. “I know everybody here and in surrounding areas,” he says.

“I can call any one of the installers and if I have a problem I know who to call to fix that problem. They lean on me and I lean on them. We work pretty well together down here.” 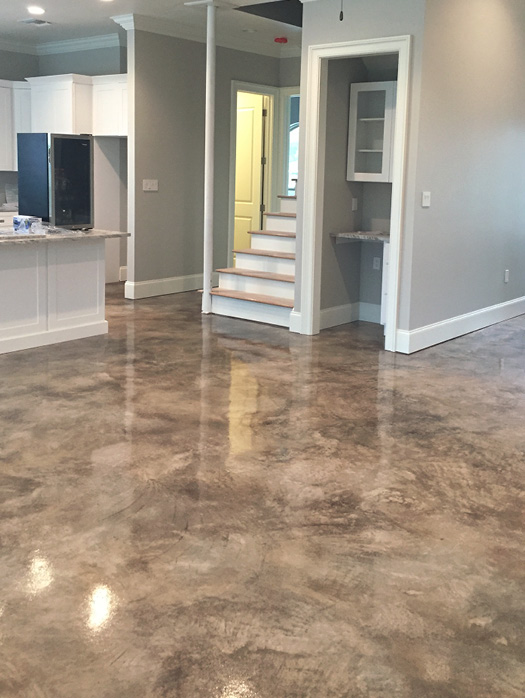 Along with Christie Tamayo of Select Surface Solutions, Lynch trains people in Orlando, Florida, four times a year as well as in other areas. He credits Tamayo with encouraging him to offer training in the first place.

“She thought my work was extraordinary and encouraged me to do trainings,” Lynch says. “After talking with her a few times, I went to one of her trainings. She brought me out of my shell.”

Ashley’s Concrete is a SureCrete distributor and, in a recent training, Lynch’s class created the world’s largest Scofield color chart. He donated more than $5,000 from two of his most successful training classes to St. Jude’s Children’s Hospital. All the money was donated from installers, without sponsors.

“With my training we put the jambalaya in the pot, we fry seafood. We gonna eat pretty good,” says Lynch with a laugh, followed by a remark about the disappointing quality of the seafood in the Pacific Northwest that he experienced on a recent visit. “It’s worth my trainings just to come and eat.” 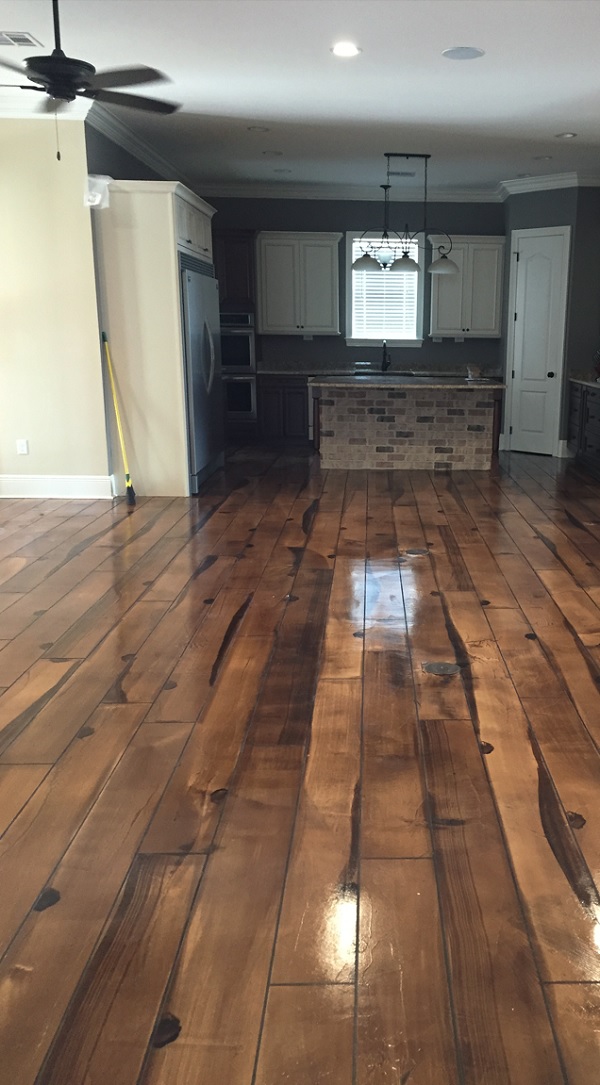 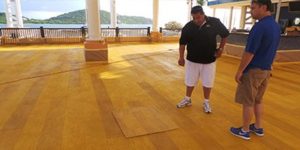 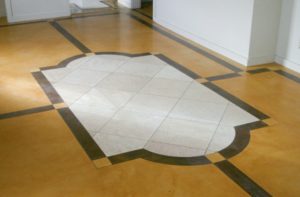