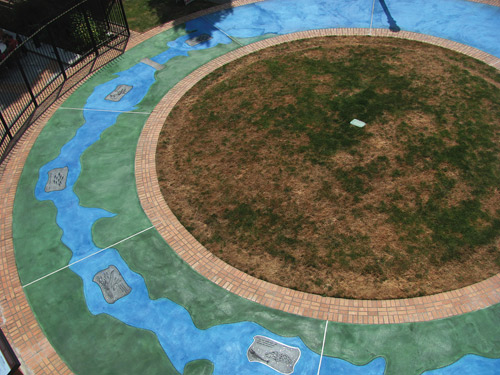 Along the Willamette River’s eastern shore, where it cuts through the heart of Portland, Ore., there stretches a long walkway, a favorite spot for locals to run or ride along the riverfront.

The path is also great for sightseers. From it you can take in several of Portland’s iconic bridges and a decommissioned 1950s submarine. And now, you can also see, interact with, and learn from a decorative concrete installation that is more complex than it looks. 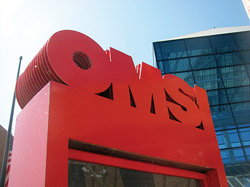 Alan Smith, owner of local concrete firm Your Concrete Guy, installed the beautiful, two-toned stained overlay for the Oregon Museum of Science and Industry’s new “Salmon at Your Doorstep” exhibit. Devised by OMSI’s exhibit team, the interactive mural on the Willamette waterfront educates visitors about the lifecycle and habitat of native salmon, as well as demonstrating human impacts on the salmon’s ecosystem.

Smith, who has been doing decorative work in Portland for a decade, says that while the OMSI project was much bigger than his team’s average fare, they were very excited to be one of the three firms the museum approached with a request for proposal.

“We took a small piece of HardieBacker board and did a small piece of the artist’s rendering,” says Smith. Their mock-up of a mural-like stained overlay won them the contract in the spring of 2011.

The project’s development phase was far from over. Smith and his crew spent the summer working with Chad Jacobsen, OMSI’s design manager, to complete a full-size prototype of an 8-by-5-foot section of the exhibit so they could work out any kinks in their approach prior to the final application. 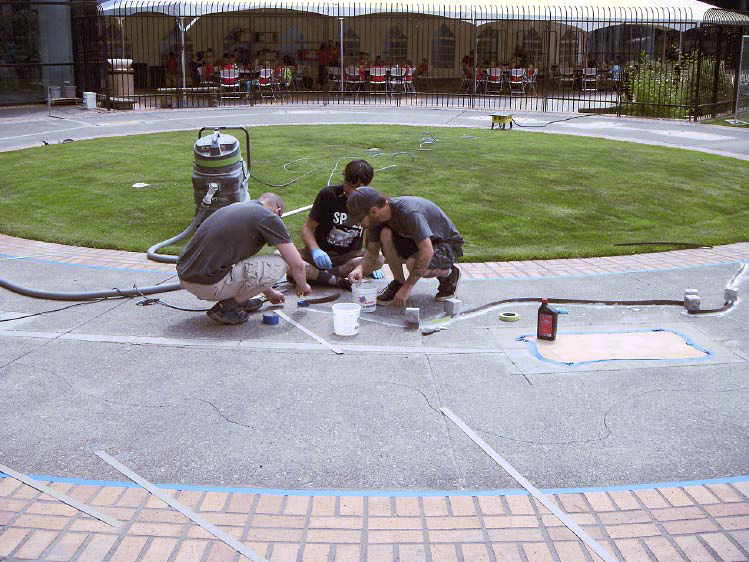 One of the central challenges of the project was the fact that the funding wouldn’t cover the removal of the existing concrete sidewalk. So Jacobsen and Smith had to develop a plan not only for the overlaid mural, but also to incorporate nine inlaid granite tiles (each illustrating an important salmon fact), complete with integrated LED lighting and electronic control boxes connecting them to the exhibit’s interactive control podium.

Jacobsen, who had never worked with decorative concrete before, says that the experience was somewhat challenging. “We worked closely with Alan and his team,” Jacobsen says, “to figure out a strategy that would let us get away with embedding the electronics we needed without completely destroying the existing concrete.”

Unfortunately, by the time Smith and Jacobsen had settled on the techniques they would use for the final installation, Oregon’s long rainy season had begun. The installation of the Salmon Sidewalk (as it is colloquially known) would not get rolling until July of this year — and even then, their weather woes were not over. 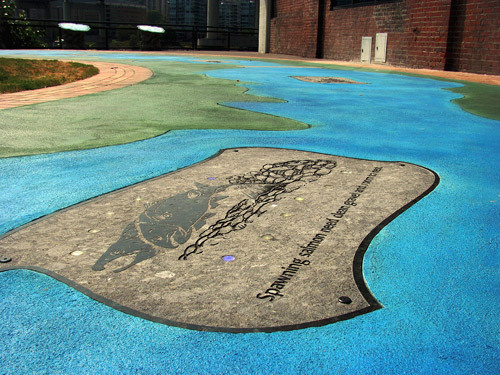 What Oregon lacks in sunshine for most of the year, it does its best to make up for during the summer months. Smith and his crew, says Jacobsen, “were on the front lines of that war.” For three weeks, the Your Concrete Guy team struggled with sunburn, heatstroke and evaporating stains. “I had never worked on an 1,800-square-foot piece of white cement in the summer sun,” Smith says. “It was brutal.” And the heat was only one challenge among many.

Thanks to their experience on the prototype install, Smith had his plan of action well mapped out. First, they saw-cut hollows and channels to accommodate the electronic components of the exhibit. Then, they treated the substrate to ensure that any cracks would not carry through into the finished overlay. The granite tiles, with their integrated LED lights, were next, installed over the electronic housings and connected to the control podium with yards and yards of cable. But all of that seemed almost easy compared to the mural’s illustrated shoreline. 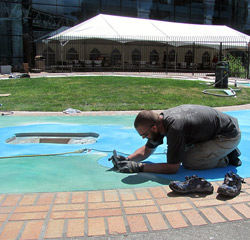 In the original design that Jacobsen’s team had developed, the river’s edge was quite intricate, taking the shape of rolling waves. It was beautiful, curvaceous — and completely impossible to recreate with an angle grinder. “We were designing an illustration,” says Jacobsen, “and not really knowing what the limitations of the technique were.” The OMSI design team worked with Smith to scale the shoreline back to a more manageable shape.

The process of actually installing the curvilinear border was no less tricky. The OMSI crew drew the pattern on the existing sidewalk, and Smith’s team, armed with an angle grinder and some diamond blades, cut a quarter-inch-deep channel following the illustrated shoreline. Then, lining both sides of the channel with two vertical sheets of thin laminate, they poured a mixture of overlay and grout between the sheets to form the border. They sanded the rest of the substrate and applied three coats of the overlay outside the sheets.

Finally, the team pulled the laminate sheets out — “only to discover,” says Smith, “that they had stuck too much.” The laminate took chunks of the border mix out with it, leaving a ragged edge.

Fortunately, the OMSI production team had a thin aluminum material available, and they worked with Smith’s crew to replace the laminate with the aluminum, top off the borders with another batch of the grout-and-overlay mix, and put down two more coats of overlay on either side. This time, the liners pulled out easily, and although it had cost them a couple of days, they had, as Jacobsen puts it, “prevailed.” 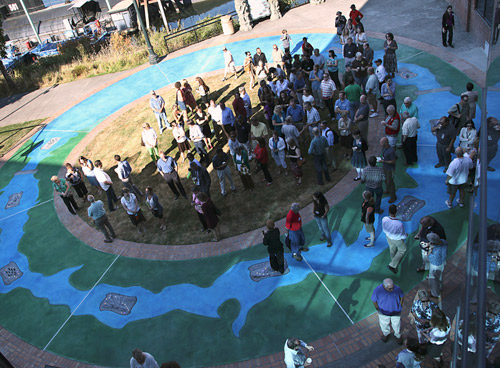 From there, all that was left was staining and sealing. GG Innovative Products Inc., a manufacturer based in Bend, Ore., had consulted with Smith to choose the right stains and sealers for the mural. Jacobsen and Smith collaborated, tweaking the water-based stain applications over several days until the vibrant greens and blues were just right.

When they had the look they were after, Smith and his crew finished the mural with several coats of a GG Innovative sealer. The sealer had to meet some fairly rigorous standards, given how much foot and bike traffic (much of it in the rain) the exhibit would receive. But not only did the prototype give Smith a year’s worth of evidence that the sealer would hold up in the weather, but GG Innovative had used the same product on a soccer stadium in Scandinavia to great effect. 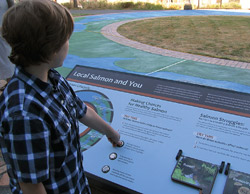 On August 6, 2012, the “Salmon at Your Doorstep” exhibit was officially unveiled, ready to educate museum visitors and passersby alike about salmon. Smith says he and the Your Concrete Guy crew take enormous pride in the fact that they’ve contributed something to the Portland riverfront that community can enjoy for years to come.

“(The project) was very similar to what I think giving birth to a baby must be like,” says Smith, “Extremely painful, very hard, very scary, and in the end, it just felt wonderful.”

Scope of project: An interactive, 1,800-square-foot mural depicts the life cycle of Pacific Northwest salmon. An overlay was colored with vibrant water-based stains to resemble the Willamette River and its banks. Nine granite stones — each engraved to depict an aspect of the salmon’s life cycle or habitat — were inlaid into the sidewalk. Integrated LED lights connect to the exhibit’s interactive control podium. 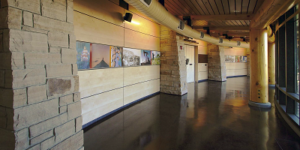 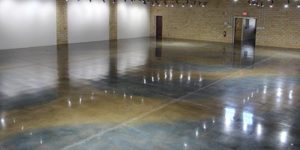 A New Way to Look at Decorative Concrete in Art Galleries 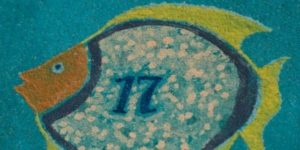