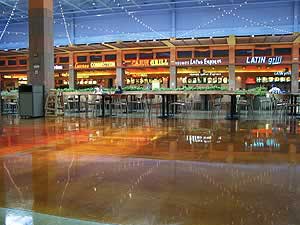 Like an artist’s paintbrush on canvas, the trowel can create a wide variety of effects on overlays.

Sometimes there’s no better way to finish a cementitious topping than to get down on your hands and kneeboards and go to town with a trowel.

Sure, self-levelers can cover large areas with a minimum of mess and manpower, they can render glass-smooth finishes with relative ease, and they can handle the traffic of even the most monstrous forklifts. But for creating 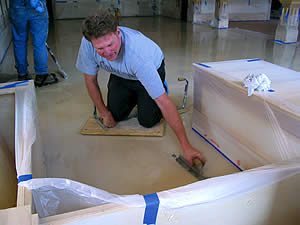 decorative floors with a handcrafted feel, the trowel is hard to beat.

Not only do the imperfections of a hand-troweled floor have artistic merit in their own right (a concrete artisan’s trowel marks are as unique as an artist’s brush strokes), but they will cause stains and tinted sealers to react with the coating unevenly, resulting in marbled or mottled looks. 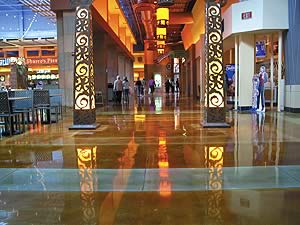 “You can kind of screw up a finishing job that you’re going to stain and seal, and people will adore you to death,” says Julio Hallack, president and owner of Concrete Innovations in Turlock, Calif. “Many interior designers are very fond of these kinds of finishes and they want you to have innovations in your thinking.”

Indeed, in the right hands, a trowel can produce a far-ranging variety of finishes. 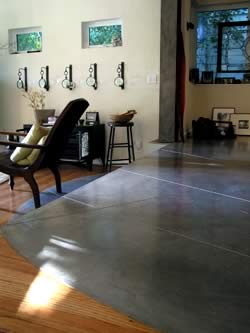 Products, a California-based cement products manufacturer. “You can do everything from creating a solid, monotone surface that looks just like gray concrete, all the way up to creating the effect of marble or stone or seamless linoleum tile where you’ve got multiple colors blended together in a random pattern.”

For marbled or cloud-like color effects, color hardeners can be broadcast onto a topping and troweled in. Similarly, pigmented water can be sprayed or dashed upon the surface, then hit with a trowel. Another approach is to mix two or three batches of an overlay or microtopping with different integral colors or different loadings of the same color. That’s a technique used by Colormaker Floors, a skimcoat manufacturer in Vancouver, Canada. 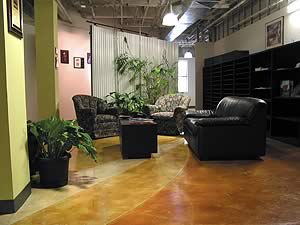 A marbled Colormaker floor might start off with a smooth-troweled base coat loaded with one cup of an integral color. A second batch, loaded with 11⁄2 or two cups of the same color, would then be broadcast randomly on the base layer and troweled in. “It mingles and gels and creates those highs and lows of the color that give the marbleized effect,” says Victor Pachade, Colormaker’s sales manager. “That’s what is possible with the second pass of the trowel.”

The textures you can get through troweling range from 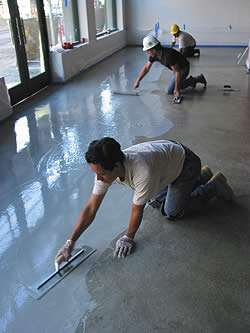 smooth, dense hard-troweled surfaces, to the lopped-off peaks and rough lows of knockdown finishes, to the oddball variations such as scallop finishes. Each cementitious overlay or microtopping on the market is designed to render certain finishes and not others, and ignoring the manufacturer’s recommendations is simply asking for trouble. So is ignoring recommendations for primers.

“There are a lot of contractors out there who believe primers aren’t necessary,” says contractor Wes Vollmer, head of Alternative Finishes in Texas. “The manufacturers have done tests with and without primers, and the ones with primers stay down far longer than the ones without primer.” 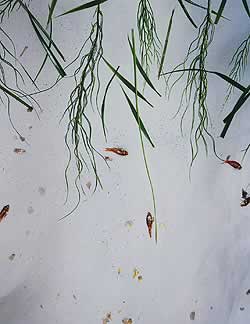 A wide variety of finishes
For a rough-textured effect that can cover a multitude of substrate sins, slop troweling is often chosen. To slop trowel, a coating is worked with the full surface — rather than just the edge — of a steel trowel, which is lifted after each pass.

“If the substrate is too wavy, or there are too many patches, or the customer doesn’t want to pay to smooth the floor, slop troweling would be a good way to go,” says Brandon Carpenter, of the California-based concrete products manufacturer Floric Polytech. “It doesn’t necessarily give you the best aesthetic, but it’s easy, it’s cheap and you still end up with a rejuvenated canvas that you can go in and saw cut and acid stain.”

Slop troweling lends itself to creative effects such as faux stone. Individual rocks can be slop troweled in place with joints left in between that can later be mortared. Grout lines between stones can also be made with 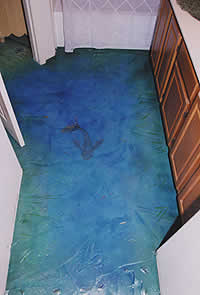 Faux wooden planking is another possibility with slop troweling; simulated wood grain can be achieved by dragging the trowel in a line while lifting slightly to create suction.

Knockdown finishes are a popular effect with good anti-slip qualities well suited to outdoor surfaces. Knock-downs are achieved by spraying down a lumpy coating material with a hopper gun, then using a steel trowel to decapitate and smooth the high points of the lumps.

Skip troweling produces an exaggerated version of the knockdown texture. After a smooth base coat is troweled in place, the trowel is loaded with a small amount of additional topping material and “skipped” across the first layer, leaving raised patties of material with flat, smooth surfaces. Extra silica is sometimes added to the coating to encourage the base coat to grab the additional material from the trowel. Skip troweling, as well as knockdown finishes, work nicely with stencils. 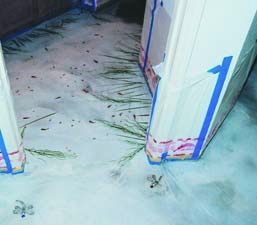 For a hard-troweled finish, a topping is spread using a steel-bladed trowel held at a slight angle. Microtoppings tend to lend themselves best to hard troweling, as many thicker overlays are subject to density blisters resulting from different curing times between the cement and the polymers in the coating.

“A quarter inch of material that is highly polymer-modified, like a stamped overlay, is where you start to have issues with density blisters,” says Carpenter. “Microtoppings are too thin for that to happen.”

Burnishing is a popular option on a hard-troweled surface. For a burnished look, the coating is repeatedly and vigorously troweled until fine particles of steel are actually imparted into the floor, creating a sort of burned sheen.

“When you’re burnishing, you’re troweling so much and so hard that the trowel actually starts to sing,” says contractor Tom Ralston, of Tom Ralston Concrete in California. “It goes ‘wing, wing.’”

Power trowels make burnishing easy — so easy, in fact, that the tricky part becomes avoiding burnish marks on floors where the look isn’t wanted. Some manufacturers, such as Wagman Metal Products in Pennsylvania, have developed plastic blades for power trowels to eliminate unwanted burnishing.

Most conventional power trowels weigh too much to use on overlays, and this has created a niche for the handful of lightweight power trowel manufacturers, such as HoverTrowel. Its 40-pound trowel was originally designed for finishing polymer floor coverings, but it has proven to work equally well on overlays and microtoppings.

While the heftier machines tend to compact concrete to a point where it won’t accept stains, the lightweight power trowels don’t. “You can burnish an overlay or microtopping and still go back and stain it,” says Drew Fagley, president of HoverTrowel.

Many microtoppings can’t withstand more than a couple passes of even a hand trowel. In these cases, a feather coating — a microtopping that contains micro-aggregates —can be applied on top of the microtopping for a burnished look.

To achieve a sweated finish, also known as a swirled finish, the trowel is held flat on the surface and worked in a rotary motion, which draws up the fine particles and liquid to the surface. Unlike slop troweling, the trowel is kept in constant contact with the surface during troweling. A magnesium trowel, which is flatter and more rigid than a steel trowel, is ideal for sweat troweling.

The worm finish is similar to the sweat finish, except a neoprene trowel is employed and larger silica might be used in the topping. The neoprene grabs and “rolls” the silica particles, creating tiny “wormholes” in the surface.

Another fanciful effect you can achieve with a trowel is the scallop finish, where a v-notch trowel is used to create a pattern of small, repeating fan shapes. This highly-textured finish is usually found on walls, but if flooded with a clear epoxy it can make for a perfectly smooth, unusual floor.

Other whimsical effects can be had by troweling metal, glass and other objects into a surface, to either embed or imprint them.

Dana Boyer, an Arizona artist turned concrete contractor, likes imprinting fish into her hand-troweled floors. She lays them on the topping after the first troweling, presses them into the surface on the second troweling, then removes them after the concrete has cured.

“It’s tedious picking fish out of there, but that’s part of the job,” Boyer says.

Boyer views her trowels as artistic tools not unlike a painter’s palette knife. “I’m a contractor and I use the tools of the trade as they’re meant to be used,” she says. “But I’m also an artist, and therefore nothing applies to me. If I want to use a heavy trowel made to finish off concrete in a manner that it wasn’t designed for, I really don’t care. Everything that’s available is my tool. I find what works and do the job.”