In communities across the country, ordinary concrete walls are being overtaken by everything from slithering lizards and leaping bluefish to giant cacti and rambling freight trains. But residents aren’t apprehensive; they’re thrilled.

Rather than monstrous monoliths of flat concrete looming on the horizon, extraordinary three-dimensional creations are popping up in cities and suburbs, along highways and beaches, next to mountains and in deserts — as one-of-a-kind works of art.

Participants agree that a lot of planning goes into these massive public projects, which usually involve highways, sound barriers and retaining walls. Depending on the scope of the project, the team may consist of architects, engineers, artists, general and concrete contractors and form-makers who work with the contracting government agencies and neighboring communities.

Simple technique brings great results
Whether the project is large, small or somewhere in between, “We [artists] like to be brought in at the beginning,” says Lilli Ann Rosenberg, an artist from Jacksonville, Ore., who together with her husband, Marvin, has been working with concrete for more than 30 years. The two have been commissioned to dream up designs for such projects as skate parks, libraries, schools, playgrounds, hospitals, health clinics and housing developments.

Once the conceptual drawings have been done and the design approved, the couple use rigid insulation boards to make their decorative forms. Their technique is quick and easy, Lilli Ann says.

She draws the images and Marvin cuts them out. They glue whole boards or pieces together for extra dimension and use a soldering iron to create textures and patterns. Next, the Rosenbergs take the carved panels to the site, where they glue or screw the carved insulation panels to the plywood forms before the concrete is poured.

Lilli Ann says they first coat the carvings with liquid soap for easier removal. “When the concrete is totally cured, in the next day or so, we pull out the foam. Sometimes we have to power wash the design to get out all the little pieces.”

It’s a fast way to make a flat, boring wall into something very attractive, Marvin says. And as soon as one job is done, he adds, there’s another one waiting. “We’re constantly getting business.”

A mold for every need
“Architectural concrete is here to stay,” agrees Buck Scott, founder of Scott System, a Denver-based firm that has played an important role in helping to advance concrete art technology. “It’s becoming more and more prevalent in the marketplace. And people are demanding more intricate designs and patterns than ever before.”

Back in 1969, Scott introduced the industry’s first elastomeric urethane form liner, which mimicked the look of rustic wood in very fine detail. Today, Scott System can replicate more than 700 textures with molds the company has created from this pliable material. Plus, they can custom-produce virtually any image or logo by utilizing the talents of staff members and of sculptors and artists across the nation who are specialists in concrete art.

The process begins with conceptual drawings, which eventually evolve into sculptured creations. The sculptor first creates the original work using a medium such as clay, plaster, urethane or wax. From this masterwork, a cast is made using a synthetic liquid rubber. Finally, from this cast, elastomeric urethane form liners are created in the reverse image of the original.

Elastomeric urethane forms can be used 100 times or more. “That’s the key. They are reusable,” says Scott. “They’re not for small jobs or one-time use.” He estimates the forms can cost anywhere from $12 a square foot to $120 on up. “It all depends on the depth of the liner, how deep the texture is, how much rubber is used.” Overall, the more involved the pattern, the more expensive the liner.

Scott System has produced form liners for a variety of public arts projects, with some liners more than 110 feet long to avoid joint lines. These form liners are so big, Scott says, that contractors have to handle them with cranes.

To fabricate the actual artwork, crews use a cast-in-place technique, pouring concrete into preconstructed vertical molds at the site. The process involves setting the forms, installing form liners inside the forms, pouring colored or plain concrete and then stripping the forms. Some jobs involve staining the concrete artwork.

In addition to elastomeric urethane forms, plastic form liners are produced by a handful of companies, including Greenstreak Inc. out of St. Louis, a company that’s been in the concrete construction business since 1951. “The architectural market has grown so much,” says Kyle Loyd, technical sales engineer. Greenstreak entered the form liner business some 20 years ago, and it’s now one of their main products.

Although Greenstreak’s designs aren’t as intricate as the ones created by Scott, the company offers 30 different stock form liners and will create logos to order. “We’re trying to get more involved in the design aspect of the business,” Loyd says, “and fit the needs of the industry as it changes.” The company provides one-time plastic and multi-use rubber form liners for tilt-up, cast-in-place and precast concrete applications.

Computers assist in design and fabrication
J.D. Moore, owner of Concrete Artforms in Charleston, W.Va., says he, too, has been producing architectural concrete forms for nearly 20 years, but he deals only with custom orders. His projects have ranged from the very small, such as residential signs, to extensive works including citywide flood control walls that depict local history.

“The things we’re doing now are more complicated and more formed than in years past,” he says. He now has the ability to make formwork in one piece or to devise a design that can be curved around a hillside. “We can do both positive carvings and negative reliefs,” he says. “The progression has been slow but steady and we’ve learned a whole lot in the process.”

Depending on the individual clients’ budgets and needs, he makes his one-of-a-kind forms with everything from insulation board, rubber and hardboard to cardboard, wood and polyethylene foam of various densities. “We make it our business to match the job to the materials we select for the form in order to provide the highest quality possible,” he says, always mindful of the cost.

Moore creates many of the designs himself. Clients typically provide a rough illustration or a description of what they want and he uses his computer to build a three-dimensional design.

“Most of our sign work is done with a computer,” he says, adding that computerized routers are used to make the master molds in his fabrication shop. Sometimes, he explains, the routers — “which can be really precise” — can do the whole job; other times he finishes the design by hand.

“We use the latest computer design software, which is compatible with the wide variety of cross-platform formats used in the design industry today,” he says. And his forms, he adds, are precision cut using CNC (computer numerical control) machinery.

Some of Moore’s artwork is precast, such as when he creates signs that involve multiple pours and several colors, while others are poured on site. Although various levels of relief will normally be enough to define most designs, Moore says he frequently uses color and textures to enhance the final product.

“Concrete is not a perfect material,” Moore concedes, “so you never really know what’s going to happen to it.” But you can be sure that the outcome will be a creation that all can enjoy. 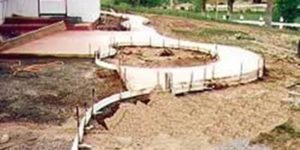 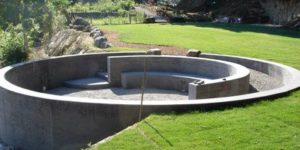 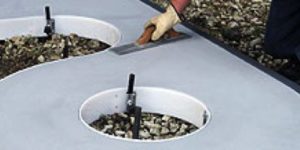