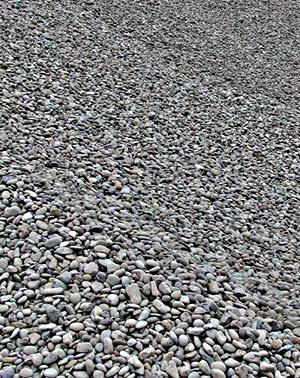 Any concrete mix is an attempt to balance cost, placeability and setting time while maintaining the necessary qualities of strength and durability. Ready-mix producers use different ingredients from region to region depending on what’s available and what kind of weather the concrete will experience before and after curing.

Coarse aggregate makes up more than 40 percent of a typical concrete mix. The type of aggregate that is available varies in different areas. In the northern parts of North America, round gravel occurs naturally, the result of glacial action during the Ice Ages. Other aggregates available are crushed rock, which is angular in form, and recycled concrete.

So what is the best aggregate to use for stamping applications? To answer this question requires an understanding of aggregate’s role in the mix.

A tale of two mixes
There’s no such thing as “the best mix” for decorative applications. “There’s not necessarily one right way, but there are upper and lower limits for each ingredient, and if you work within them, you’ll get better results,” says Bruce Chattin, executive director of the Washington Aggregate and Concrete Association. Examining two mixes from decorative concrete contractors in different parts of North America shows how great regional and personal differences can be.

Tom Ralston, of Tom Ralston Concrete in Santa Cruz, California, starts with this mix for one cubic yard of concrete:

Ralston specifies that the mixture be poured at a 3- to 4-inch slump. Rather than trying to predict the weather, he orders the truckload to arrive 30 to 45 minutes before the pour, then doses it on the spot with Fritz-Pak admixtures to accelerate or retard setting as needed.

In Cincinnati, Ohio, Bob Ware, president of the Decorative Concrete Store, favors a different mix appropriate to his freeze-thaw climate:

Though Ware also pours at a 4-in slump, his mix contains a lot of water reducer to make the water content unusually low in comparison with Ralston’s.

With these general mix proportions in mind, let’s look at how the size and shape of aggregate affect the properties of the wet mix and the finished product. 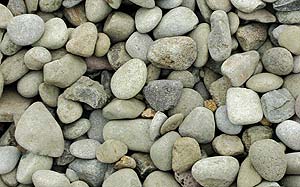 Aggregate and strength
First, the shape of the aggregate affects the strength of the finished concrete. In general, angular crushed particles give concrete greater strength because they interlock more than rounded pea gravel particles do. Mixing sizes, as Ware does, enhances that interlocking action.

“In our area, we have a lot of round aggregate because of deposits of glacial till,” Ware explains. “To get an angular gravel, we would have to have it trucked in.” When he does a job in the southern part of his territory, south of where the glaciers stopped, he takes advantage of the ready availability of crushed rock.

“Angular gravel is better,” he says. “Round gravel is soft. You have to push it deeper into concrete than angular gravel, or it will break and spall the surface.”

Size also influences strength: The bigger the aggregate, the stronger the finished concrete will be, since the chunks of rock don’t crack as cement paste does.

Aggregate and stamping
But if you’re going to stamp the concrete, big chunks of rock will interfere with the impression of the stamps. Brickform Rafco recommends using aggregate no bigger than 3⁄8 inch with its stamps; other manufacturers let you go as high as 3⁄4 inch. Ralston uses 3⁄4-inch angular hard aggregate for jobs that will be textured with mats. If he plans to use cookie-cutter-type stamps, which penetrate more deeply, Ralston switches to pea gravel or 1⁄2-inch crushed stone. “The larger stone won’t allow the stamp to make an impression,” he says.

With this in mind, Dave Pettigrew, principal of Diamond D Concrete in Capitola, California (near Santa Cruz), used to use pea gravel for stamping applications, the size of aggregate he still favors for concrete that is going to be pumped. But now, for stamping, he specifies a 1⁄2-inch angular rock for interior floors and a 3⁄4-inch angular rock for foundations, which require more strength. He points out, “With smaller rock, you have to use more control joints because it is not as strong,” something to consider when you’re planning a stamp job and want to position those control joints inconspicuously.

Aggregate and water
Aggregate size also affects the amount of water needed in the mix. Ralston explains, “Because smaller aggregate particles have more space between them, more sand is added. To make the concrete more workable, people want to add more water, which increases the shrinkage potential.” Instead of adding water, he says, a better practice is to add water-reducing admixture to improve workability without introducing these problems. Slump should not exceed 4 inches.

Other admixtures
Water reducers aren’t the only admixture that is useful. Another ingredient that can improve workability without compromising strength is type F fly ash. Chattin suggests using it to replace 10-15 percent of cement in a mix. It will produce some of the effects of adding more water — increased setting time and improved workability — without compromising strength as increased water does. Granulated slag cements, relatively inexpensive in the steel-making regions of North America, can have the same effect and, being more uniform in content, are more predictable in their air-entrainment properties. An important consideration for decorative applications is that Type F fly ash makes concrete that’s darker than concrete made with plain portland cement, and granulated slag cement makes it lighter in color.

Tom Ralston uses 15-20 percent fly ash to replace cement, but he doesn’t do it to get workability benefits. In his town, many of his residential and commercial customers have heard of the environmental benefits of fly ash — getting particulates out of the air while it reduces the carbon dioxide production associated with cement manufacture — and are eager to specify it for that reason.

An ingredient to avoid if you are planning to use color hardener is calcium chloride, which will interfere with the action of the colorant. If you’re going to experiment with other admixtures, make sure to consult the manufacturers about each chemical’s interactions with other components of the mix. “Crack reducing and air-entrainment admixtures ‘fight,’ and it weakens the mix, which becomes spongy,” Ralston explains. “It won’t set up properly. I’ve seen it not ready to trowel after 24 hours.”

Still, correct use of admixtures can shave time off a job. “They may cost more money, but you could be done an hour sooner or use fewer workers on the job,” Chattin points out. Just consult the manufacturers and the ready-mix producer to make sure that you don’t brew up a batch of trouble in your mix.

An important relationship
In fact, it’s always a good idea to keep your ready-mix provider informed about what you’re going to do with the concrete. Sit down with the ready-mix rep every so often to talk about the mixes you need for different kinds of work. “Having a relationship with a ready-mix producer is important,” says Chattin. You know the habits of your crew and the patterns of your climate, and the ready-mix rep knows the materials that are available locally and the quirks of the admixtures on the market. Together you can put together a mix tailored for your decorative applications.