The artisan says: This project began with a proposal to a church for work on a large set of steps at the main entrance that were in need of a facelift.

The steps had several cracks, areas that had spalled, and some sections that had been repaired with thin laminations of concrete. Also, the top platform was capped in such a way as to create excessive pitch.

Our estimate was half that of a competitive bid. Our approach was to use the existing steps as a base and then cover it with a heavily reinforced unbonded and decorative concrete overlay. The reinforcement was achieved with galvanized wire lath, wire mesh, 1/2-inch rerod and structural synthetic fibers. This overlay was designed to react independently of the base steps to allow for shrinkage and the effects of the freeze-thaw cycles.

All of the vertical surfaces were finished with cultured stone. The concrete was integrally colored, and impressions were made with “cookie-cutter” stamps and hand chisels. All of the impressions were deep in order to act as control joints and arrest shrinkage. These impressions were grouted to create the realistic appearance of custom masonry.

The church elders were pleased with the results. Due to their cost savings, they decided to allow us to resurface another set of steps, a sidewalk and a bell tower.

This method of resurfacing with the unbonded concrete overlay allows us to isolate cracked and spalled areas so that they do not transfer through the finished product. The concrete for this project had a minimum thickness of 1 1/2 inches.

The artisan says: The Art Deco-styled Detroit Water Board Building has been a familiar part of Detroit’s skyline since October 1928. The completed building reflects the trend toward simplification of forms typical of the Jazz Age. Standing 23 stories, it is comprised of a five-story base, a 15-story shaft, and a three-story penthouse. Beyond the first floor lobby, the customer service center is awash in cream-colored marble on the walls and pillars that frame the inner entrance.

The historic Detroit Water Board Building customer service center was undergoing a major restoration to return it to its former glory when Abstract Concrete was called to the task of restoring the floor. Originally, the floor consisted of a limestone common to the era, but over the years it had seen various floor coverings, the latest being an unattractive VCT tile. Replacing the flooring with the original limestone was not an option because this replicate stone would be difficult to locate as well as cost-prohibitive.

Our task was to install a floor that would compliment the decor of the marble walls. For this we would use a troweled overlay that we would scribe the pattern into and stain. But first, we had to tackle the issues with the substrate. Once the existing floor, layers of mastic, and patch materials were removed, we found a substrate with a maze of cracks unlike we had ever seen. The concrete slab of the era was a floating slab, and the construction technology was not as refined as it is today. To deal with this problem, and to prevent further flooring problems in the future, a special micro-doweling polyurea-urethane hybrid was used to mend the cracks. While this solution is not foolproof, it is the best technology available today to deal with the problem. The special crack filler penetrates deep into the concrete and remains flexible to inhibit further crack formation or recracking.

The most complicated task of the project involved reconstructing the entrance with the addition of a wheelchair ramp to bring the building into compliance with ADA standards. This was done, and the installed flooring was seamlessly integrated.

The flooring consisted of the troweled concrete overlay with a scribed pattern. It was stained to compliment the existing marble, in keeping with the Art Deco appearance of the customer service center. A clear UV-stable epoxy topcoat finished the surface 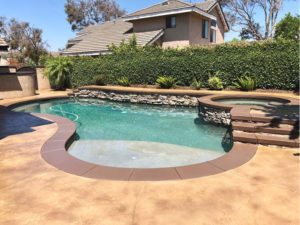 The Art, Science and Strategy of Concrete Color Restoration 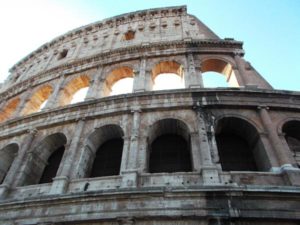