A while back I was approached by a large manufacturer of tapes and adhesives for the construction industry. They were very interested in learning about the types of adhesives and tapes being used by decorative concrete applicators as well as the common problems applicators had when using these products on typical decorative jobs. I did not have to think very long or hard to put together a list of suggestions and common problems. Like a lot of ancillary products used by decorative installers, the tapes and adhesives used in the industry typically come from other markets and are nothing more than the best option available at that time. Sometimes these crossover products do the job, and other times they fall short and cause problems.

It is widely known that the decorative concrete industry has struggled with tape issues for decades. These range from the tape tearing when overlays are being applied, or stain bleeding under the tape, to adhesive effectiveness when the tape gets wet.

But by far the biggest problem with tape in the decorative industry is the issue of chemical weld between tape and sealers causing sealer failure when the tape is pulled. Interestingly enough, it is not widely discussed and even less understood. I was one of the first to identify this issue as a problem in our industry more than 10 years ago, and I still include the topic in most all of my troubleshooting presentations today.

There is nothing worse than completing a beautiful stain or stamped concrete project where everyone is happy and you’re paid on time, only to get that dreaded phone call — we have a problem! The painting contractors or homeowner taped protective paper to the decorative floor two weeks after you completed the job, and when they pulled the tape up the next day, it took all the sealer and stain with it, leaving a long ugly narrow strip everywhere tape had been applied. This is a big problem, and to make it worse, the owner usually ends up falsely accusing the decorative installer of poorly installing the original work.

The above scenario actually takes place more often than most in our industry realize. The problem occurs with all types of tape, even the blue and green low-adhesive brands, and on all types of sealed floors. I have found that it does occur more often with acrylic sealers and when the sealer is less than one month old.

Blame the tape’s resin
The main culprit for this issue lies with the flexibility and type of resin used on most construction tape. When you take a closer look at the glue on the back of tape, you see that it is very flexible. The glue gets its flexibility from plasticizers, additives used to make plastics and rubbers softer and more flexible. For example, high-performance car tires have a lot of plasticizer, which makes them softer, allowing for a better grip on the road.

Those plasticizers allow the glue to flow or “migrate” to form a better bond with the surface they are attached to. Since most decorative sealers have some porosity, the glue migrates into those pores, forming a very strong bond. When the tape is removed, if that bond between the tape and sealer exceeds the strength of the sealer’s bond to the concrete, the sealer — and often the stain as well — comes off too. (The term “plasticizer migration” that has been used to describe this phenomenon is not completely accurate, as the plasticizer is not migrating out of the glue, but rather is allowing the glue to migrate into the sealer. I think a better term would be glue migration.)

There’s another problem too. The acrylic resin used in the glue on most tape is similar to the acrylic resins found in most decorative sealers and cure-and-seal products. When an acrylic sealer is applied, there is a certain drying window that is required for the sealer to form that hard-wearing surface. The sealer may be dry to the touch one to two days after application, but that does not mean the sealer has completely dried chemically. The process may take weeks depending on temperature, humidity and how thick the sealer was applied.

When tape with acrylic glue is used on a floor with an acrylic sealer that is still chemically drying, the two acrylic resins can form a very strong and permanent chemical bond. I have seen cases where this bond is so strong that when the tape was removed it took not only the sealer and stain, but the top 1/16-inch of the concrete as well. This is why the issue of tape pulling sealers off concrete tends to occur with newer sealed floors. But don’t be fooled — the chemical weld between acrylic resins can take place at any time if the right conditions exist. It can also take place between tape and other common decorative sealer resins such as polyurethanes, epoxies, polyaspartics and polyureas.

If you have to repair a floor where tape has removed the sealer and color, the best approach I have found involves using faux finish techniques with tints and stains to touch up the color in the taped areas, followed by resealing. A more invasive approach involves chemically stripping the entire floor, recoloring, then resealing.

The issue of glue migration is not selective to sealed surfaces. I have seen significant damage done when tape was applied to unsealed concrete prior to staining. The same process occurs, but instead of the glue migrating into the sealer, it migrates into the concrete. When the tape is pulled some of the glue remains in the pores of the concrete. The downside is that you can’t see it until the concrete is stained, at which time it shows up as a blotchy line on the floor.

This is another good reason to do a water test on the concrete prior to staining — the glue line will show up and give you a chance to deal with it prior to staining the floor. If you need to remove glue from a concrete floor, a solvent wash to liquefy the glue followed by a light scrub and dabbing with a rag works best. 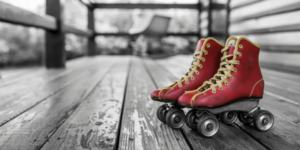 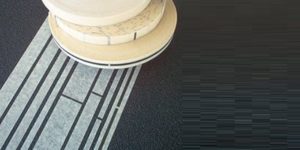 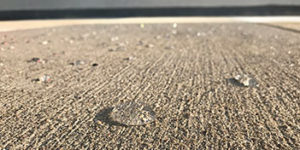