Once again, Concrete Decor’s Concrete Restoration Contest attracted quality submissions from all over the country. The winning entries run the gamut from a small residential job to a large public works project spread across several buildings.

We are pleased to announce the winners.

Royal Coat Inc., based in Morehead City, N.C., for restoration of the North Carolina Maritime Museum in Beaufort, N.C.

In the words of Barry Kreager, president, Royal Coat Inc.:

The museum contacted us after they had a water leak that severely damaged their beautiful hardwood floor in the lobby area of their maritime facility. This was a project with many obstacles — we were working in a museum and had to keep dust to a minimum. We created a bubble to insure no dust would enter the rest of the facility, which was difficult because the room had a three-story ceiling.

We removed all of the damaged hardwood and adhesive, then ground the entire floor with diamond grinders. Then we had to apply fill material to ramp up to all the doorways and entries.

We applied a concrete overlay in a wood-grain pattern using tape and hard bristle brooms for texture. We sprayed two shades of color and sealed with a urethane for durability.

Hays Consolidated Independent School District, just outside of Austin, Texas, was looking to replace the flooring in three schools totaling about 70,000 square feet. This work was to be completed over the summer break of 2007. The existing floors were vinyl composition tile that had developed several issues over the years. Due to a moisture/vapor emission problem, the tile was blistering and adhesive was wicking up through the tile joints creating an unattractive floor — along with making maintenance very difficult and costly. The goal was to remove the tile and replace with a floor that would reduce maintenance costs and enhance the overall appearance of the campuses.

The moisture/vapor emission problem in the slabs eliminated the option of just reinstalling resilient flooring unless a vapor barrier was installed. After researching many options, it was decided that polished concrete was the best solution.

The vinyl composition tile was removed, revealing several layers of adhesive along with varying thicknesses of patching materials. All of this was removed using HTC diamond grinders. We now had a clean palette to work with and began scoring patterns and the “flying W” into the floor using the Engrave-A-Crete Mongoose saw. The floor was then polished and dyes were applied. Each campus had its own color scheme and in order to match the decor of each school, three different brands of dyes were used — DCI Ruby Red and Royal Blue, Brickform Deep Walnut and Mission Brown, and AmeriPolish Patriot Blue and Black – to create the 3-D effect of the “flying W.” The colors were then locked into the concrete by applying DCI Polish Guard.

Two of the campuses had large ramps separating different wings of the schools. Originally rubber tile was specified for these areas to reduce the slip risk on a sloped surface. We ground the ramps along with the rest of the floors to remove old adhesive. The principals of each school loved the beautiful aggregate exposed and liked the look of the decorative concrete so much that they wanted to eliminate the rubber flooring and continue the flow of the decorative concrete into these areas. The issue we had to overcome was the slip-resistance factor. We originally considered adding some type of abrasive to the sealer but feared creating a difficult floor to maintain. Luckily we were very close to a Decorative Concrete Supply branch in Buda, Texas, and they had a ground PVC product that we added to their premium sealer and created a floor that was slip resistant, fairly easy to maintain and looked great while keeping our aesthetic theme through the campuses.

After several conversations with the school district facilities and maintenance departments, we have found that they are extremely pleased with the polished concrete floors. We have not only created beautiful floors, but have created a floor that has reduced their maintenance costs along with (offering) the ecological advantage of eliminating stripping and waxing of resilient flooring.

In the words of Kelvin Lorenz, Black Hills Hardscapes Inc.:

The project involved a facelift for an amphitheater originally carved into the rocky canyon walls of Fall River in 1936 by the band director at Hot Springs High School. As the picture (lower left) indicates, 71 years of Mother Nature and neglect had taken their toll.

As a lifelong resident of Hot Springs and alum of HSHS, when the Hot Springs High School Alumni Association approached me about restoring this historic site, I agreed with the need, accepted the challenge, and offered to donate the decorative portion of the work.

Since most of the cracked and crumbling surface had succumbed to the elements over the years, we began the project by removing roots, weeds and accumulated debris and then proceeded to expose underlying sound concrete by jackhammering, scarifying and bush-hammering every square inch of the old structure. All cracks were then routed and ground out, filled with epoxy, and sealed with fiberglass mesh.

Since parts of the structure had settled, its drainage was poor, resulting in trapped and retained water. This problem was resolved by sloping all horizontal surfaces with a polymer-modified cement to establish proper drainage. The entire surface was then covered again with fiberglass mesh embedded in a polymer-modified cementitious base coat, with double coverage on all corners.

The original sandstone sign positioned at the top of the bandstand was historically inaccurate and in a state of disrepair, so it was replaced with a cut limestone slab bearing the correct history of the era. The exposed rock face of the canyon wall that cradles the structure was sealed with a pneumatically applied mix of polymer-modified, fiber-reinforced cement that was integrally colored using pigments from Davis Colors to match the surrounding rock and historic sandstone buildings in the area. This was then further blended and antiqued using three colors of Semco stain, providing a seamless transition from the sealed rock to the surrounding features and vegetation.

The vertical surfaces of the bandstand were then base-coated with a trowel-applied mix utilizing white and gray portland cement, metakaolin, polymer, silica sand, fused silica and Davis pigments, followed by two pneumatically applied topcoats of the same color. Semco stains were also used sparingly here to add movement and depth.

Given the historic nature of the town, one of our biggest challenges on this project was to restore the structure and its old warmth and charm without making it look too modern, pristine and new. This was accomplished in part with a product made by ArcusStone that we used for the seating areas. We tinted the ArcusStone with pigments from B&J Colorants and trowel-applied the material to the surface after priming with the recommended bonding agent. We wrapped the ArcusStone 4 inches over the edges and inserted mortar joints about every 3 feet, simulating large, thick pieces of cut limestone. We intentionally distressed the fresh surface to help achieve the warm, well-used look that we were after. Upon initial curing, the horizontal surfaces were polished using a DS-301 polisher, imparting a shine that resembles 71 years of surface patina where cut limestone meets backside denim. To guard against the elements and graffiti, the entire surface was sealed with a silicone rubber sealer from Professional Products of Kansas.

The restoration of the amphitheater benefited not only its looks, but also its acoustics. We noticed that during the restoration process, the acoustics also steadily improved to a point where, upon completion, a “sweet spot” developed at a location dead center in the structure, where, if one speaks even softly toward the back wall, it reverberates back to the speaker as though in stereo, filling both ears with one’s own words.

Surface Design, based in Walnut Creek, Calif., for restoration of front house steps in Oakland, Calif.

In the words of Dan Koloski, Surface Design:

This is troweled texture with a scored-in flagstone pattern. I used a picture of a Brickform Flagstone stamp from the catalog as a guide as I chalked out the pattern. As it shows in the before photos, there is a two-inch drop from the top of the last step down onto the patio. We had to install 37 50-pound batches of “build-up” material to blend out the drop-off and create good drainage for the patio. The customer was very particular about the design elements of pattern, texture and color, and we had to make 10 or so sample boards in the course of choosing the design. 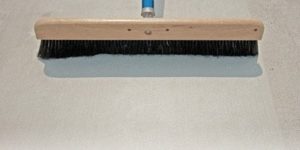 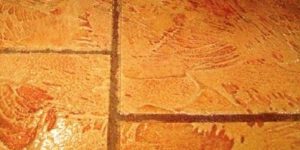