Passion, precision, artistry and creativity were all on display at the L. M. Scofield Co. ninth annual Decorative Concrete Awards ceremony held during the World of Concrete 2017 in Las Vegas. Scofield, now a member of Sika, a specialty chemicals company with subsidiaries in 93 countries around the world, enlists professionals from the concrete industry to judge submissions based on skill of installation, artistic expression and integration with the overall design intent.

This year there were Grand Prize winners in six categories and a first-ever Special Merit Award. 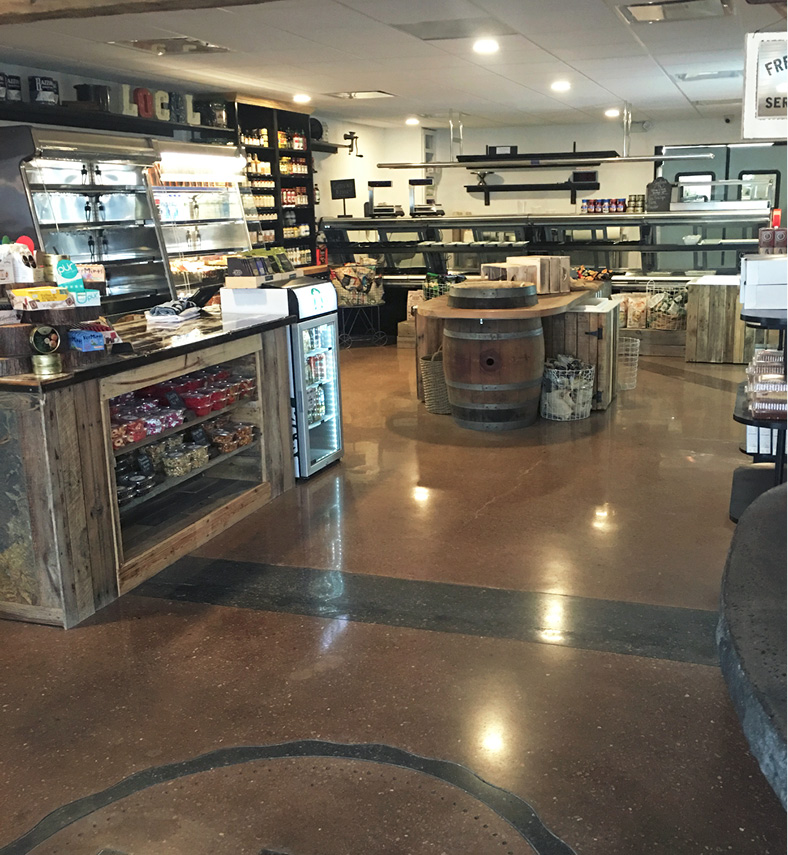 Sustainable, fresh, recycled and, above all, local are hallmarks of The Local Market & Restaurant on Long Beach Island, New Jersey. So when the owners saw the polished concrete samples in the nearby showroom of Philadelphia Polished Concrete they knew that’s what they wanted in renovating their vintage building.

PPC founder and owner Bart Rockett and his team started by removing three layers of vinyl composition tiles. Then they spent two weeks grinding and polishing the 2,000-square-foot floor. While some contractors take ghosting of old tiles and glue as a given, Rockett keeps grinding. “We wanted it to look like a brand-new floor, to be as perfect as we could get it,” he says. “If you’re going to do concrete, you need to do the extra work.” Ultimately they removed a quarter inch of the old surface.

The fact that the concrete was in a humid environment for around 60 years meant that it was softer than many slabs that age, so grinding was not too slow or difficult. The floor’s age also yielded a happy surprise – local aggregate, including colorful river stone, polished up to look almost like terrazzo. PPC used Scofield Formula One products, including a lithium densifier, liquid dyes and a water-based finish, to get the beautiful, durable floor the owner was after. 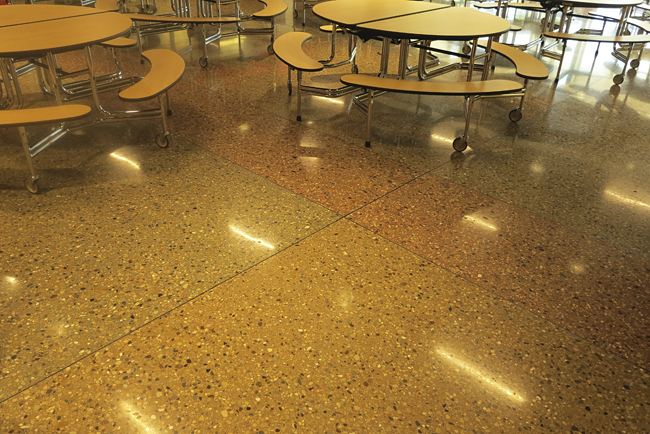 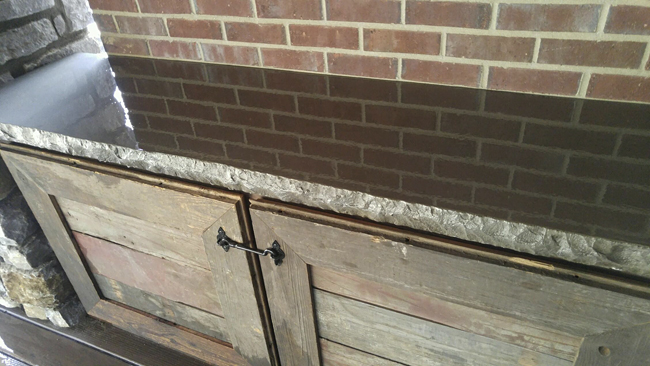 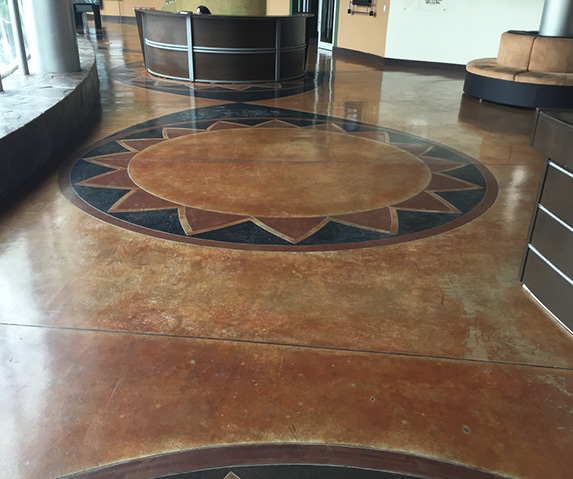 Many of us dream of going home again, but this dream came true in a very unusual way for Julio A. Hallack, president of Concrete by Hallack based in California. His professional journey back home to Hermosillo, Mexico, took a circuitous route from landscaping, to colored concrete to decorative concrete to training.

It was at a training session he was conducting at World of Concrete when he connected with a contractor working on the beautiful El Museo de Arte back in his hometown. The contractor made introductions all around and soon Hallack was in Hermosillo meeting with Puebla Arquitectos, who designed the floor.

Architectural students at the University of Sonora drew the design on the floor, a Seri Indian floral motif that was also repeated in the ceiling. One challenge was setting up a cross-border project. With no big box supply store near the site, Hallack planned and purchased all the equipment and tools that would be needed and shipped them to Mexico.

Hallack and his senior staff saw cut the pattern the students had drawn, but timing did not allow him to remain on-site until the project’s end. So he took the unusual approach of teaching a local contractor and student team how to apply the Lithochrome Chemstain Classic stains, neutralize the surface and apply sealers.

“They took this very personally,” he says. “They were not like workers; they were like owners. When I went back to check, they were doing everything right.”

Now on his trips back to Hermosillo to visit his parents, Hallack always visits El Museo. “It always looks beautiful!” 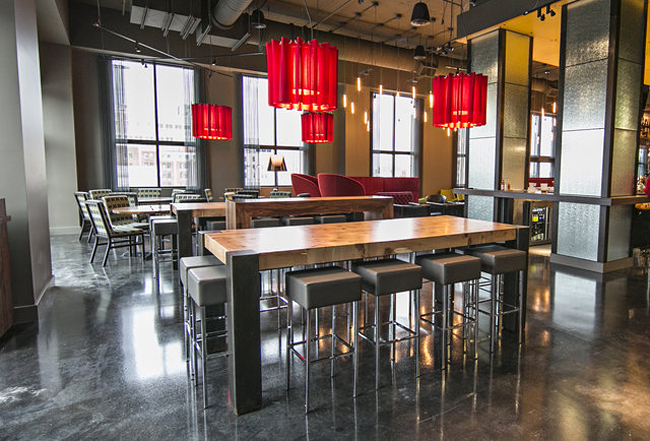 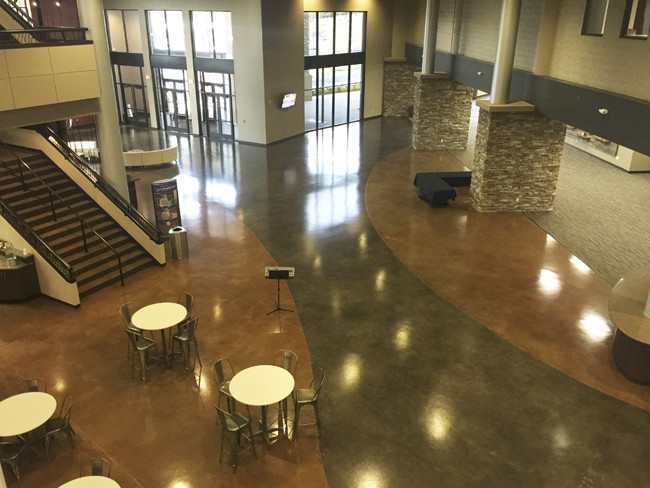 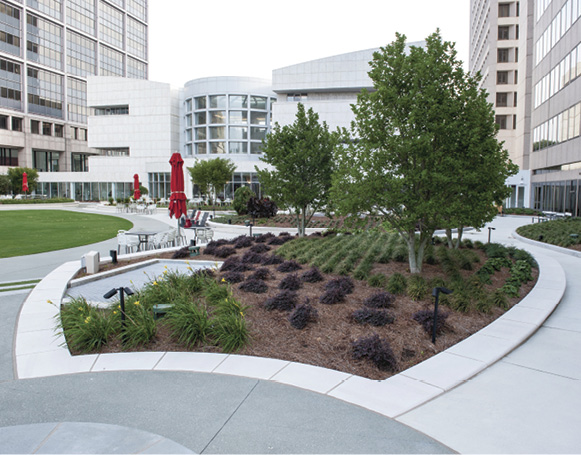 The renovation of the plaza at the Coca-Cola headquarters in Atlanta is truly an integrated project. It integrates the open area with the existing parking structure below. It integrates multiple elements — decorative concrete, precast walls, plant material and natural and artificial turf — into a unified design. It even integrates the signature shape of a classic Coke bottle! The concrete carries out this integrated theme, as it is integrally colored using Chromix Admixtures.

With the existing landscape settling, the hardscape cracking and the underlying parking structure leaking, the plaza had to be completely replaced. It was demolished to the original structural concrete. This structure was then waterproofed and Ruppert Landscape began work on the new outdoor space.

The biggest challenge was the formwork. To reduce weight, polystyrene foam was used to level the grade, so there was no firm foundation for the forms. Additionally, the forms had to be perfectly placed to accurately reproduce the bottle shape, which would be viewed from every floor of the two high-rise buildings on either side of the plaza. To accomplish this, Ruppert used sandbags to securely hold the forms.

Two colors of concrete were used. About 12,000 square feet were colored Slate Gray and then treated with a surface retarder and washed to expose the aggregate. Another 30,000 square feet were colored with Antique White in a mix with white cement. This surface was broom finished. The final result is a signature property with a landscape that refreshes, whether enjoyed outside or viewed from inside. 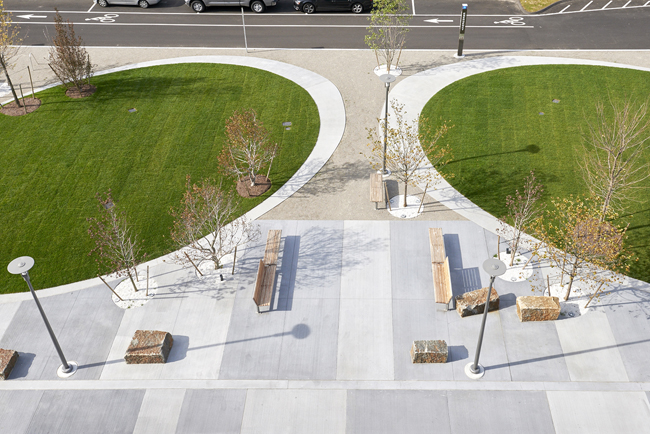 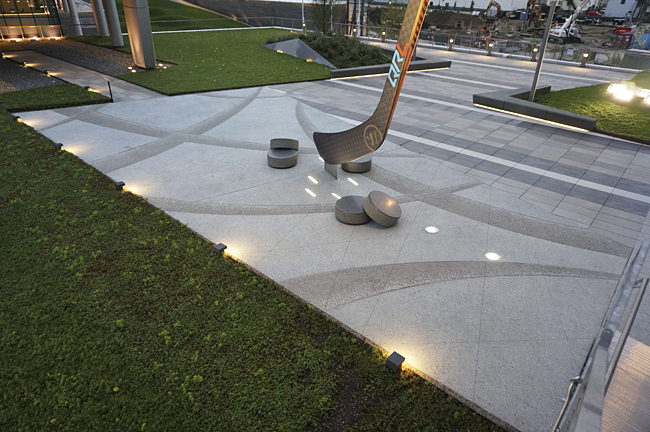 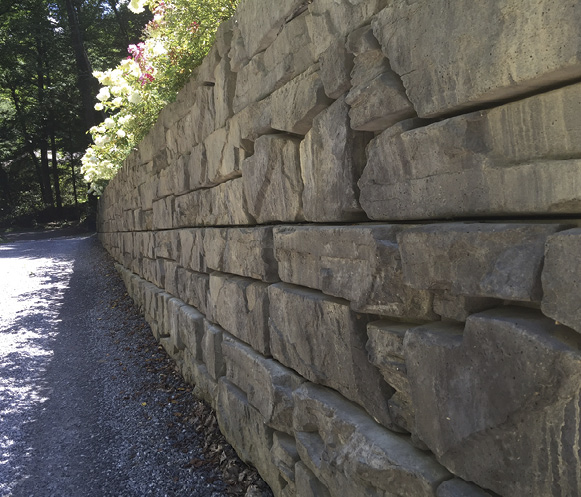 The town of Montreat, near Asheville, North Carolina, takes its name from the local Mountain Retreat Association and is idyllically situated in the Flat Creek Valley with mountains on three sides. The area is notable for stone, both in the countryside and in the buildings, so when the town wanted to upgrade a dirt slope into a walking path, it needed a retaining wall that would fit in naturally.

Officials deemed stone to be prohibitively expensive and didn’t think concrete looked natural, so what was the solution? Carolina Ready Mix answered that question with its licensed Verti-Block system of hollow precast blocks. These are anchored with gravel that reduces weight but allows water to drain. Aesthetically, they look like natural stone because they are cast with forms molded from natural stone. The trick was getting a natural-looking color.

Carolina Ready Mix cast the blocks using Chromix Admixtures for integral color and then added variations that would occur in stone by applying Lithochrome Color Hardeners and antique releases here and there. All of this took place at its plant before the blocks were delivered and installed.

Sales manager Marty Reinfeld says, “I’m not a very artistic person,” but he knew that the colors Carolina Ready Mix typically offered as standard for this system weren’t going to work in the walking path. He recommended a Lithochrome Color Hardener in Walnut and Antique Release in Pecan Tan to make the new retaining wall blend into its surroundings as if it had always been there. 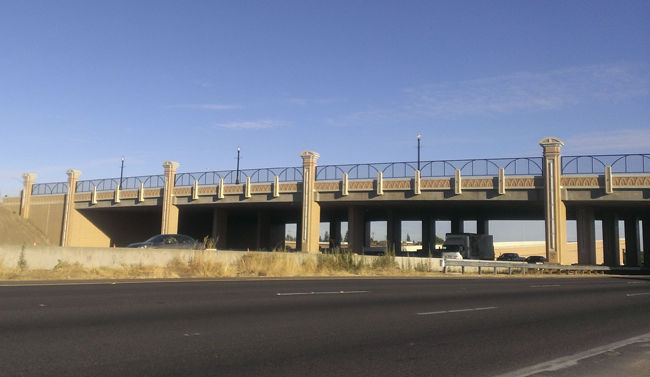 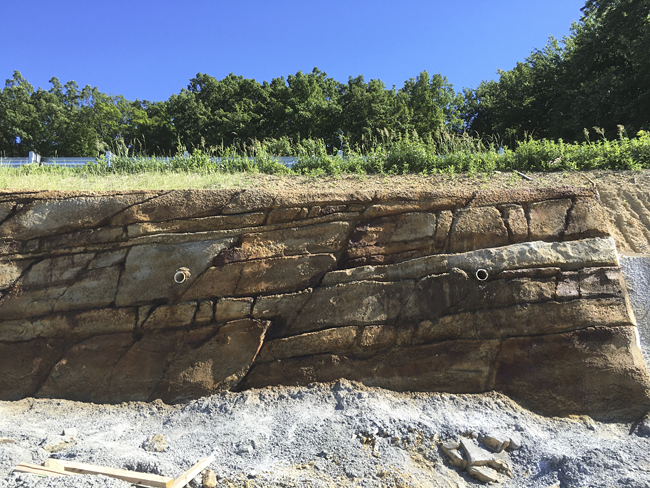 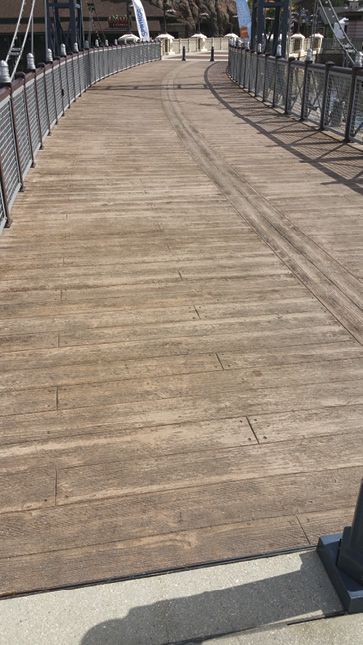 The designers of Disney Springs in Orlando reached way back into Florida’s past to bring a unified retail and dining area into the present. They selected UCC Group to help them recreate the Florida that early explorers and settlers would have seen. Part renovation, part new construction, the development is centered around a bubbling spring, surrounded by concrete that looks like tile, stone, dirt pathways, exposed shell paths, wooden decks and even railway turntables. In the end, 78 different types of concrete finishes were used.

UCC used Chromix Admixtures for integral color and Lithotex Pavecrafters stamping tools and Lithochrome Color Hardener to stamp tile patterns. Rock salt and shell stone patterns were also imprinted and antiquing releases, stains and several sealers were integrated throughout. With a million square feet of hardscape and retail floors, Duthie says, “It’s not a long shot to say that almost every product that Scofield manufactures was used in some form out here.”

Duthie is convinced the client, vendors and visitors at Disney Springs love the new development. How can he tell? The two brand-new parking garages for 6,000 cars are almost always full. 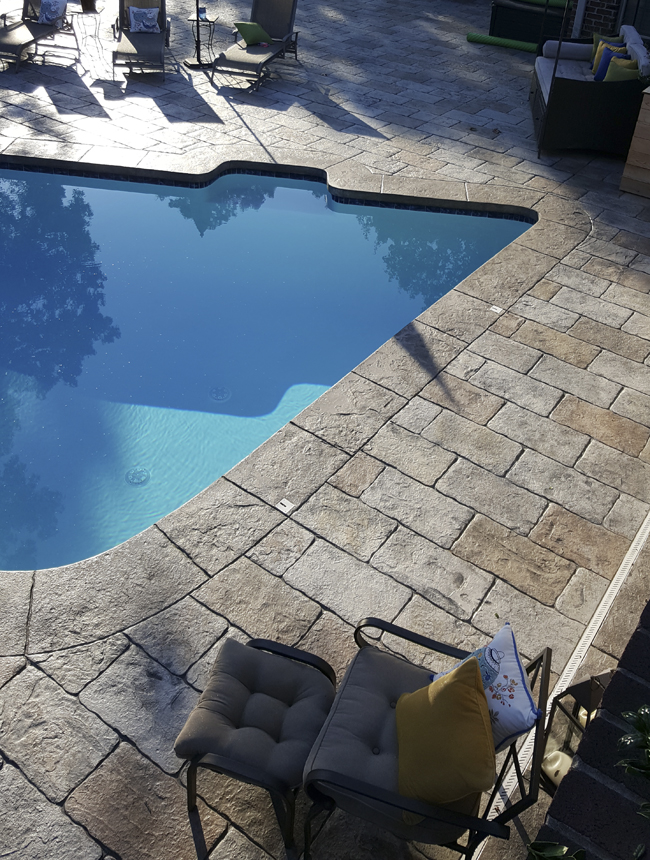 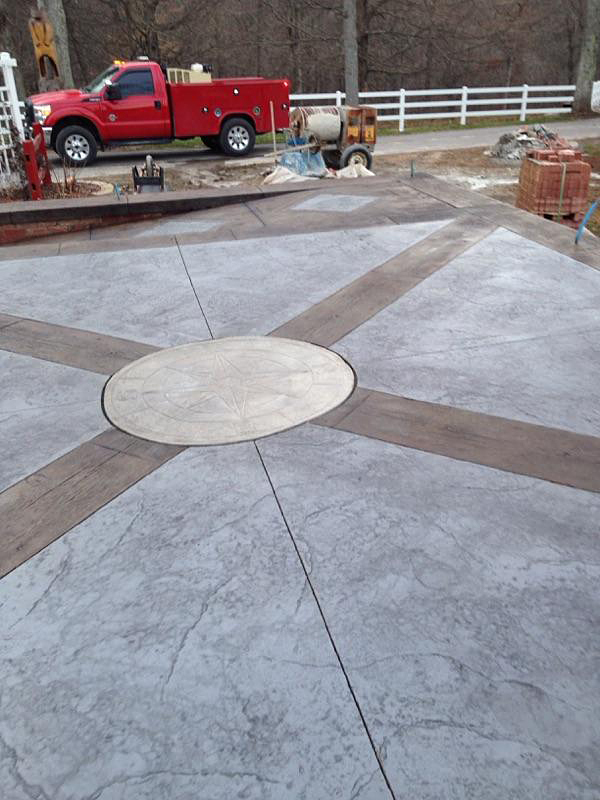 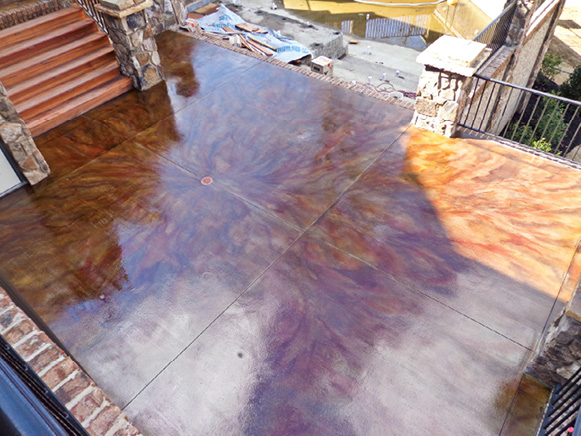 “Pool Flower” may seem a fanciful name for a concrete project but it perfectly describes the effect Victoria Morgan Simpson achieved on a custom home patio. Actually, this was just one part of a large project at the home that also included a man cave in the basement and a showroom for the homeowners’ car collection, as well as a garage, kitchen and bar, each with its own theme.

These areas have their unique stories and charms, but it is the Pool Flower that won the Scofield Award Grand Prize for Artistic Concrete. Here Simpson, owner of Capitol Decorative Concrete, used her signature technique of allowing multiple colors of acid stain to mingle, creating a range of color effects not possible with one color alone.

In this case she felt fortunate to work with the concrete installers to get the best mix and best finish to make the acid stain work to its full potential. Then she took full advantage of the slope of the concrete to let the Lithochrome Chemstain Classic stains flow together until they reached the center drain. The one-of-a-kind effect looks like petals radiating from the center of a free-flowing flower.

The Pool Flower is on a landing that’s part of a multilevel deck connecting the pool to the house. Above the patio is an outdoor kitchen. 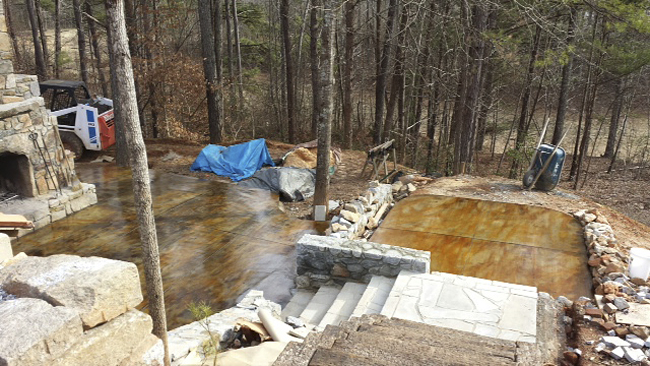 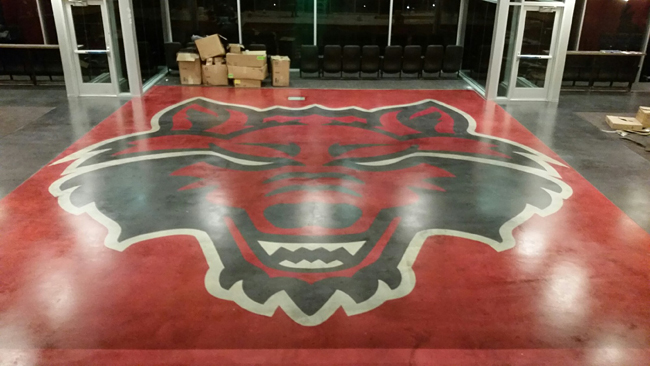 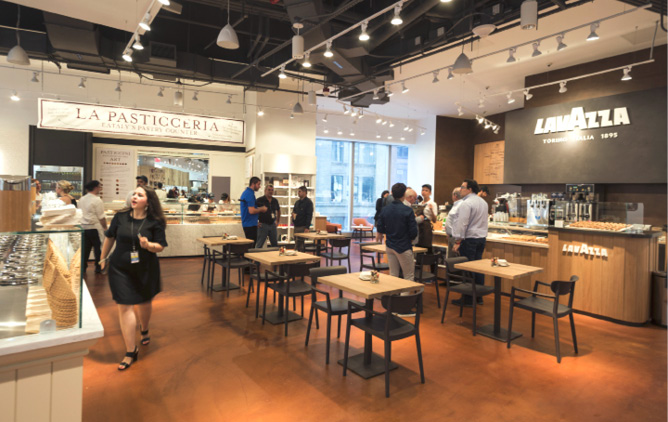 Sometimes timing, talent and technique come together in a way that might make you believe in a perfect storm. This certainly describes the man and the project that earned the first ever Special Merit Award at the Scofield Decorative Concrete Awards. Industry icon Amedeo Cilli — in his words “back and better than ever” after a two-year battle with cancer — was asked to create the floor for the new Eataly, an upscale food emporium at the iconic site, 4 World Trade Center in Manhattan, New York. 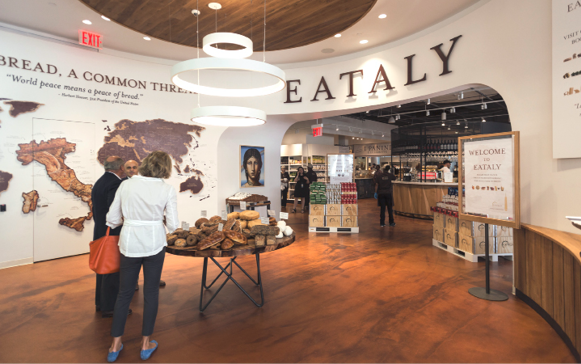 Attempts by other contractors to fulfill the architects’ vision had fallen short, so Cilli very carefully studied the interplay of all the materials. First, he discovered that the self-leveling cementitious base was not reacting as required with the Lithochrome Chemstain Classic stains he wanted to use. He poured 10 mock-up slabs and stained one per day until he discovered that allowing the slab to cure for five days before applying the stain would get the best result.

Cilli also drew on years of experience and experimentation to develop a coating system that delivers the best color and protection. First he applied a layer of Sikafloor 216 epoxy coating. Then, to protect the epoxy from scratching, Cilli applied two thin coats of Sikafloor 304 W polyurethane. “This epoxy just pops the color beautifully – it just explodes the color,” he says. “It becomes so vivid. It’s really, really amazing.” 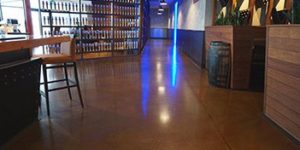 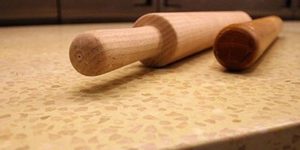 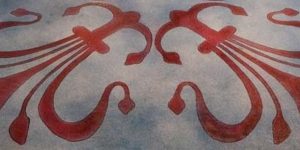