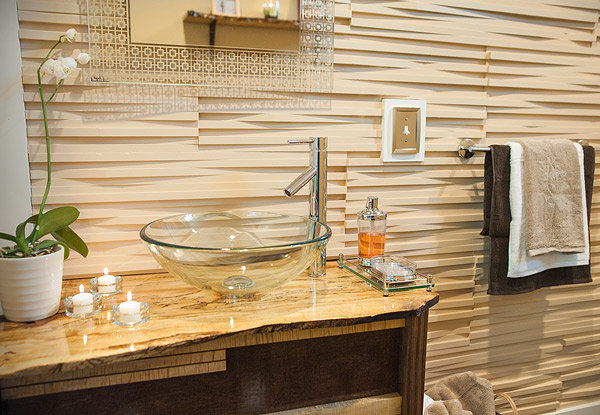 After 100 years in the decorative concrete industry, L. M. Scofield Co. knows a thing or two about beautiful, standout projects. As it marks its centennial, the company also marks its seventh annual Decorative Concrete Awards, given to contractors, architects or designers doing exceptional work using Scofield systems. Here are short features on the 2014 grand prize winners in six categories, as well as the names of the runners-up.

Bay Design, a subsidiary of Bay Contracting, has built a business around mold fabrication and concrete art using glass fiber reinforced concrete (GFRC). According to vice president and owner Chad Ravellette, “We can replicate just about anything.” 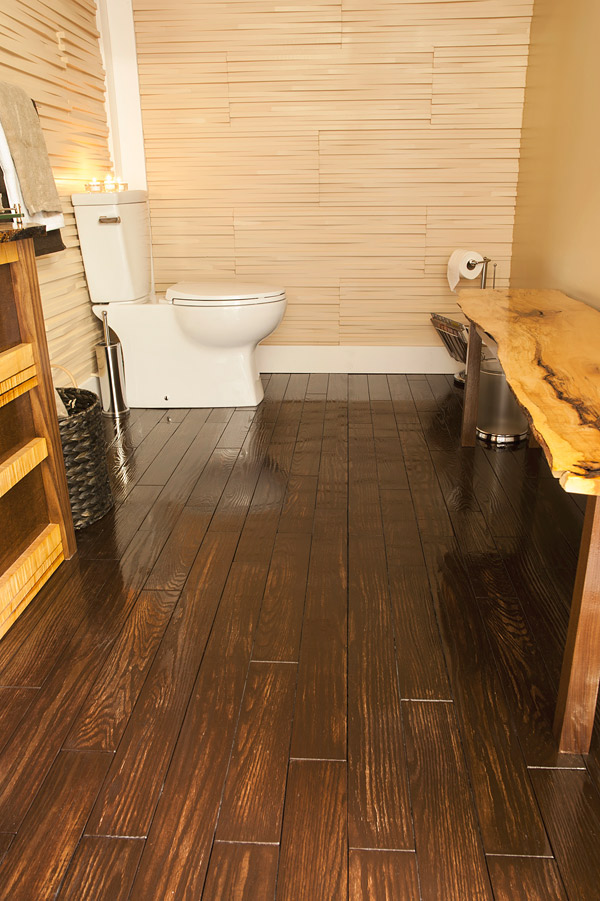 Like many contractors, they build artificial rocks for landscaping and water features. But what they do most is one-off wall tiles for spaces ranging from high-rise facades to the bathroom that won this year’s Scofield Grand Prize in the Artistic Concrete category, a recognition Ravellette says is owed to the entire Bay Contracting team.

Bay Design has a real passion for replicating wood and it shows in this bathroom, which is in the Bay Contracting office. When the crew decided to fast-track this installation to meet the competition deadline, carpenter Mike Crombie took inspiration from a pile of scrap wood. He cut and stacked the pieces to create a striking geometric pattern and then used that wood model to make a mold for the wall tiles.

The GFRC was integrally colored with Chromix Admixtures in Adobe Tan, color matched to the original color of the wood. The wall tiles were modeled, molded, fabricated and installed in just a week, working a schedule around the company’s other projects. The floorboards, one of Bay Design’s featured products, also were molded from carefully selected board wood and fabricated of GFRC. “We spend a lot of time picking the right wood,” Ravellette says. This floor was colored with Lithochrome Chemstain Classic in Dark Walnut.

Don’t be fooled by the maple vanity and bench — those are hand carved from wood, though Ravellette says they have done vanities and benches like these in concrete as well. Old or refurbished wood is one of their favorite materials to replicate in GFRC. He says of his team, “We take wood in its most beautiful state, when it’s old, at the end of its life. Then we make it live on for another 20, even 50, years in GFRC.” 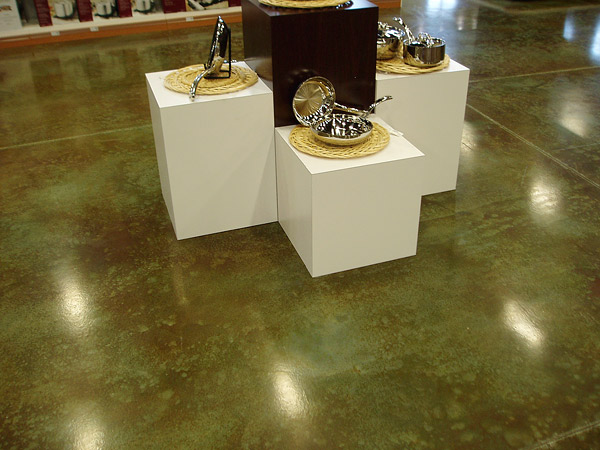 A popular Virginia tourist attraction, the Williamsburg Pottery comprises market spaces for gourmet foods, outdoor living and home essentials, including its signature salt-glaze pottery handmade on site. When the space was redesigned, a stained concrete floor was chosen to harmonize with the historic ambiance of Williamsburg and to honor the 75-year history of Williamsburg Pottery. The 95,000-square-foot floor uses color to differentiate the retail, display and traffic areas.

“Quite a lot of thought went into how to highlight the spaces and make them stand out,” says Brad Sams, owner of Deco-Crete in Richmond. “I got to take all their wishes and make something workable.” Using the whole Scofield palette, Sams estimates they showed the designers and owners 30 samples of different color combinations and application techniques before they settled on three Lithochrome Chemstain Classic colors: Padre Brown, Antique Amber and Weathered Bronze.

“Weathered Bronze is a fun color,” Sams says. “It totally relies on the variations in the concrete to bring out tones of blue, green and brown. At the end of the day you don’t want a painted floor.”

The project was finished with two coats of Scofield Cureseal-S Gloss Sealer, which Sams credited with protecting the floor through the rest of the construction process. 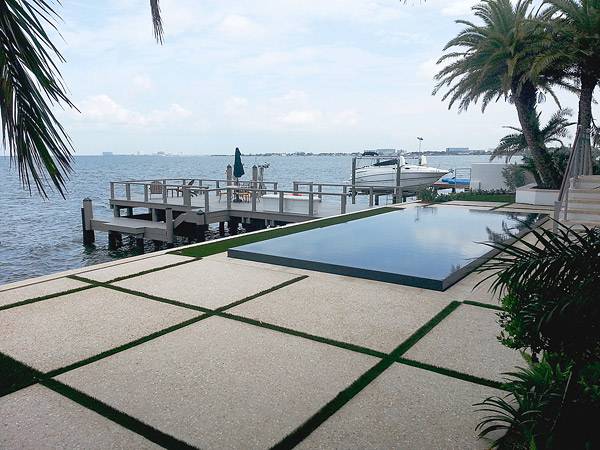 Sometimes the scenery needs to be the star. The owner of the Tampa, Florida, home featured in this winning entry wanted to make the most of its views of Old Tampa Bay. This meant a simple design with nothing to obstruct the line of sight from the elevated main floor to the bay. This was achieved with a crisp, horizontal, symmetrical plan that unified the concrete pool deck, vanishing edge pool, planters and even the dock.

The dark shimmering pool surface is perfectly set off by the white concrete slabs outlined by strips of emerald grass. The look was achieved using a mix with 100 percent white cement, integrally colored with Chromix Admixtures in a custom color, finished by exposing the specially blended aggregate and sealing with a xylene-based sealer.

Connery Concrete used motorized Georgia buggies to move and place the concrete because of the tight working area and narrow access from the front of the property to the back where the pool deck was situated. Careful placement was crucial to the quality of the finished project. The sharp geometric shapes and sleek finish required a high level of craftsmanship and attention to detail.

Over a career of 38 years as a general contractor and a specialist in both decorative and structural concrete, Jim Connery, president of Connery Concrete, has built his business on a commitment to quality materials and installations. This award-winning project is a good example of the company’s attention to detail and high standards.

“We never try to go after the awards in our business, figuring our work speaks for itself,” Connery says. “However, to see the look on the crews’ faces when we won this one really took the cake.” 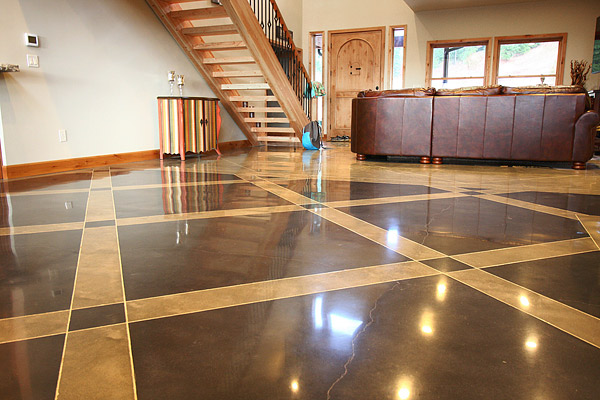 This new dream home has a dream floor, thanks to the imagination of the couple building it and their cooperation with FloriArtisan, a Spokane, Washington, decorative concrete studio. Their vision was for bold color and striking pattern, a goal owner Dennis Florianovich helped them achieve with dyed, polished concrete.

The new floor was ground and polished using techniques Florianovich says he learned from his mentor Pat Nordquist, a concrete artisan from the early days of the industry. Using this traditional approach, the FloriArtisan crew started wet grinding with 50-grit resin diamonds on a floor that wasn’t designed to be polished. They wet polished with minimal water, to maintain a slurry about the consistency of toothpaste.

“If you want a cream exposure and still polish every nook and cranny, that paste is essential to polishing the low spots,” Florianovich says. With the paste, “You can achieve an even polish in the low spots that don’t make contact with the diamond tooling.” 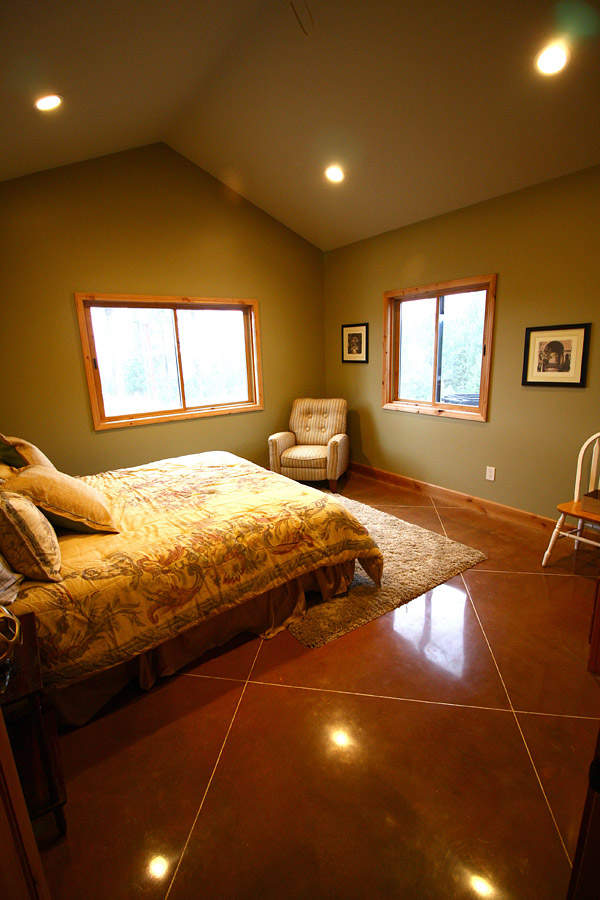 The vivid colors were achieved with Scofield Formula One Liquid Dye Concentrate in Black, Bahama Blue, Ponderosa and Inca Gold with Driftwood for the borders. The creamy gray of the natural concrete local to Spokane makes for a handsome contrasting border to the black diamonds of the great room floor. The dye was applied with a B&G Concrete Acetone Sprayer for maximum control of overspray. After the colors were applied the concrete was densified with Formula One Lithium Densifier.

Geometric patterns were created with decorative saw cuts filled with white joint filler compound. When dye spraying was complete Florianovich, with the help of the owner, used variable-speed peanut grinders with rapid strip pads to remove the contaminated surface of the joint filler and expose the clean white below. Formula One Guard-W was used over the whole floor as a protective coat.

Florianovich shares the credit with his crew and the homeowners for their creative vision and the elbow grease it took to achieve this beautiful outcome. 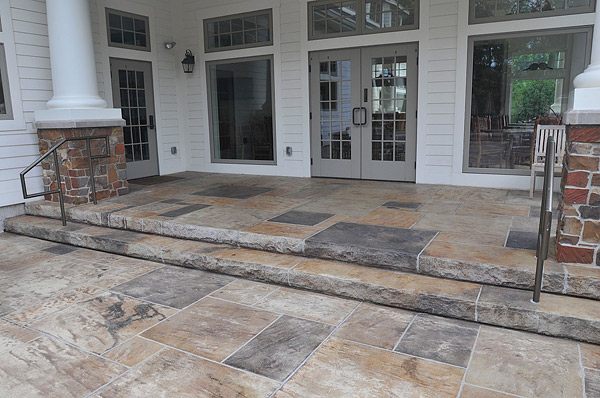 The appearance of natural stone in this stamped patio is created with a combination of color, imagination, ingenuity and arithmetic. The base colors for the design are Stone Gray, Steadman Buff and Russet Lithochrome Color Hardener with Classic Gray Lithochrome Antiquing Release. Other colors also were layered to create a natural stone look.

“Nature layers her colors — there are no vivid colors in stones,” says Amedeo Cilli, senior director of the architectural division of Intricate Construction. “So it is common for us to stain something like this more than once. We may dilute the stain to only 10 percent the first time and then for the next step we make some stones darker and leave others lighter.” Ironite garden fertilizer sprinkled over the concrete before spraying the stain also creates waves of subtle color.

Enhancing the stamp was part of the illusion, too. After stamping the traditional flagstone pattern, Intricate Construction routed the edges of the “stones” to 1/2 inch and grouted the joints to resemble traditional stone finishing. This grout line was continued down the vertical surfaces to complete the look of individual stones. The vertical edges of the steps were molded with a rubber liner Cilli had made from real stones.

And what about the expansion joints? This is where arithmetic comes in. The stones in this pattern are sized in multiples of 6 inches. The crew coordinated the stamps so they would line up for a continuous straight line once every 10 feet. The expansion joint is the grout line so no joint has to be cut across the stamped pattern. Cilli credits teamwork for the success of this tactic. “Concrete waits for no man,” he says, “so you know you’ve got to have a team that works together.”

Using concrete instead of stone does more than save the owner money. Normally, grout joints fail and stones shift. Under Intricate Construction’s lifetime warranty the project is resealed every two years, keeping the joints watertight. According to Cilli, “As long as we keep it sealed, it lasts forever.” 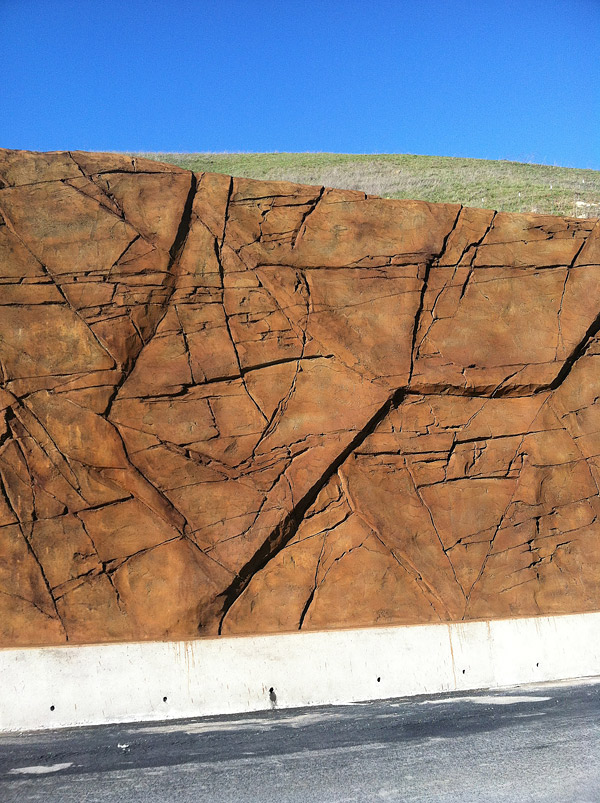 Two-hundred fifty-thousand square feet of vertical sound wall as high as 20 feet in some places is not a typical decorative concrete project, but Soil-Tech was up to the job. Owner Jerry Stanley’s crew had a lot of experience staining concrete but little experience with Scofield products, so before they ever went on-site they practiced with the materials and application techniques.

The contractor knew there would be no second chance on this section of California highway. What’s more, this was, in the words of Soil-Tech estimator Rue Sani, a “very, very visually sensitive project.” It needed to fit into the natural surroundings and it had to blend in with already existing phases of the project.

To meet the customer’s requirements and vision, Soil-Tech used Lithochrome Chemstain in Dark Walnut with Black accents. The stain was applied with a power-driven sprayer from a man lift by an operator using the required protective gear. One of the challenges was getting close enough to the surface to spray the color and accents to create the most natural look possible. This required a brushing motion with a rhythm that allowed the color to appear to fade in and out of shadows. “It had to be very artistic,” Sani says. “It needed to look three-dimensional.”

Another challenge was wind. “This was a really technical project,” Sani says. “The guys really had to think of details like wind direction and speed.” They started early in the morning before the winds came up. If there was a gusty period of winds over 10 mph or if the wind was blowing toward structures, work had to stop. It was critical to control overspray on a project this large.

This was Soil-Tech’s biggest Chemstain project to date and it was happy with the superior outcome. Sani says the client was, too. “Our customer is probably on the top of the list of particular clients. They just don’t take second best. This was a tall order for us and we were proud of it.” 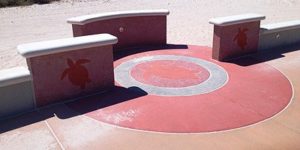 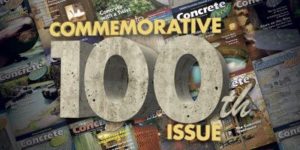