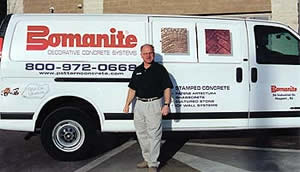 Ira Goldberg says he was born with gifted hands. The Brooklyn native wanted to share his gift, so he attended Brooklyn College and graduated with a teaching degree in industrial arts.

But life had other plans for Goldberg, and after graduation he started his own contracting business.

“My partner and I did major high-end renovations and additions. We were number one in New Jersey,” says Goldberg, who owned Alberg Custom Contracting.

Meanwhile, Palo Alto, Calif.-based Bomanite Corporation was just getting started, expanding its reach by establishing franchises around the United States. “Between 1979 and 1982 I saw a lot of plans coming in that called for Bomanite,” says Goldberg. But the fledgling corporation had too few franchises in the area to respond to every request for its product.

Goldberg saw his opportunity. He contacted Bomanite about becoming a franchisee.

“They wanted a concrete contractor,” he says. “We were general contractors and builders. It wasn’t a perfect match for them until they checked us out and found out our reputation was impeccable.”

Goldberg became a licensed Bomanite franchisee in 1984. He started with a small area in New Jersey that included Monmouth, Middlesex and Ocean counties. He quickly proved himself there and expanded his territory to include areas from Bergen County to Cape May, eventually incorporating all of New Jersey.

“By 1989 we had added all of Long Island and the five boroughs of New York City to our territory,” Goldberg says. Since then he has added eastern Pennsylvania. Bomanite of New Jersey, New York City, Long Island and Eastern Pennsylvania now employs 36 people (and as many as 60 during peak periods or extremely large jobs) and is one of the largest Bomanite territories (per capita) in the country.

Bomanite stands the test of time
In 20 years, Goldberg has seen a lot of changes. He remembers a time when he had no competition to speak of.

“If a customer wanted stamped, decorative or any kind of high-tech concrete, there was nobody else to call. Now there are thousands of contractors across the United States and hundreds in our area alone who are trying to duplicate what we do.” 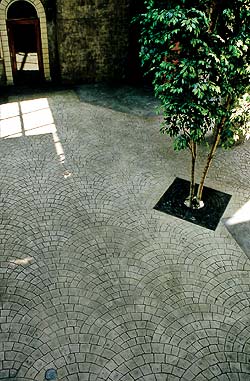 “There are people out there who are not quality-minded and make a bad name for the good people out there,” he says. He has to remind property owners and architects alike that all stamped concrete is not Bomanite. “We still separate ourselves [from other concrete contractors] by the quality of our work, the system we use and the proprietary things that make us just a little bit better than the competition,” he says. “They’ll get there eventually, and then hopefully we’ll be a step ahead of them.”

But Goldberg changed their minds when he reminded them that their patios and driveways were concrete. “We just do decorative, beautiful concrete, using mix designs that work for our freeze-thaw climate,” he says. “They were speccing concrete on every one of their jobs. Why not make it beautiful?” 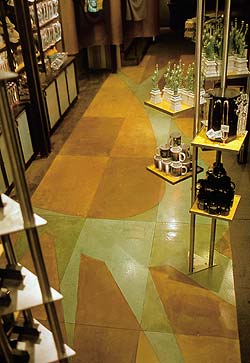 Today he draws potential customers through his proven track record in decorative concrete work. But the eye-catching results don’t hint at the trials and tribulations that go along with many projects. Caesar’s hotel and casino in Atlantic City is a good example of a project with a “faster-than-fast” turnaround that required more than its share of patience. A section of the roof had to be removed to provide access to the project area. Meanwhile, hundreds of other construction trades were working in and around the same area. Add to that the difficulty of dealing with variations in pour thickness that ranged from 1/2 inch to over 8 inches thick and the challenge of maintaining quality when heavy equipment was driven over the surface between the time of placement and the seal. Despite all these problems, the project received an award from an independent panel of architects for the best Bomanite project worldwide.

Goldberg’s other major projects include Six Flags Great Adventure in Jackson, N.J., Madame Tussaud’s in Manhattan and Bally’s in Atlantic City. On a smaller level, he lists thousands of patios, pool decks and driveways. He’s currently working on a $60 million renovation on the Tropicana, also in Atlantic City. 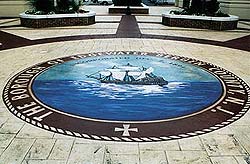 Family ties
With a degree from UCLA in computer science engineering, Ira’s son Brian is taking his father’s business into the 21st century. Ira’s wife Ellen manages the office. Ira’s business partner of 15 years is Manual Cardoso, a native of Portugal who spoke little English when Goldberg met him. “Someone told me he was amazingly talented,” Goldberg says. “So I watched him work. His son translated for us that whole summer.” Goldberg hired him, later promoted him to foreman and in 1987 offered him a partnership. “He’s been my partner ever since.”

In 2001 Bomanite of NJ put together its first sublicense — North Jersey Bomanite — for the residential north Jersey market. Goldberg sees this as an opportunity to focus on larger commercial projects. The operation is proving to be successful in its first year and will likely lead to the addition of future sublicenses. 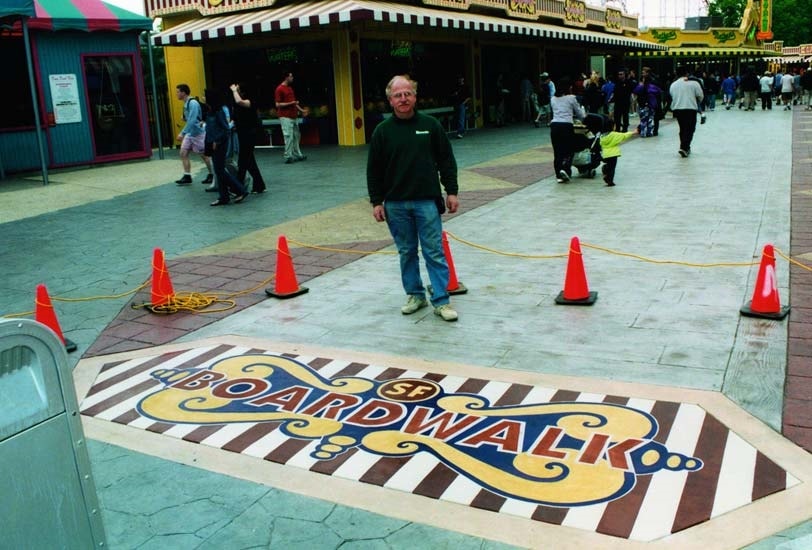 In 2002, Bomanite of NJ moved into its new home, a 10,000-square foot office and warehouse and one-acre interior/exterior showroom. Here future and repeat customers can view all types of decorative concrete samples and get a realistic idea of what Bomanite can create.

Growth through sharing
While the competition from non-Bomanite contractors has steadily increased, Goldberg is happy to say that contractors operating under the Bomanite name are encouraged to share their knowledge. The Bomanite International Society (BIS) exists as a vehicle for this exchange. Through corporate-sponsored training and a new BIS web site designed by Goldberg and his son Brian, the network of Bomanite-licensed contractors can share questions, ideas and techniques.

Goldberg has twice served as chairman of the BIS Advisory Board, which serves as a liaison between Bomanite contractors and homeowners and between contractors and the Bomanite Corporation. He currently serves as treasurer of the board. 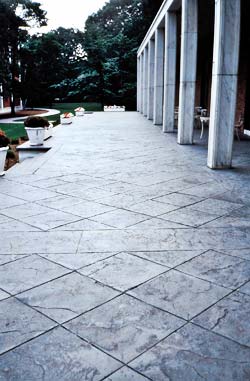 Training is everything
Goldberg’s teaching skills have proved useful, as he is certified to lecture on concrete technique and control of concrete and teaches classes that provide architects with continuing education credits. He is also a certified ACI technician and concrete finisher and an active member of the New Jersey Concrete and Aggregates Association promotion committee.

“We’re constantly training,” he says. “We like everybody on our crew to learn every aspect of what we do, so that everybody can fall back into someone else’s position at any time.”

His advice to contractors: Keep training. “Training your people is the most important thing. And they need to know what you expect from them. You need to operate as a team, where every player on that team knows what he’s doing and what’s expected of him.”

Bomanite of New Jersey, New York City, Long Island and Eastern Pennsylvania is located in Cliffwood Beach, NJ. To contact them, call (800) 972-0668, e-mail them at or visit their Web site.